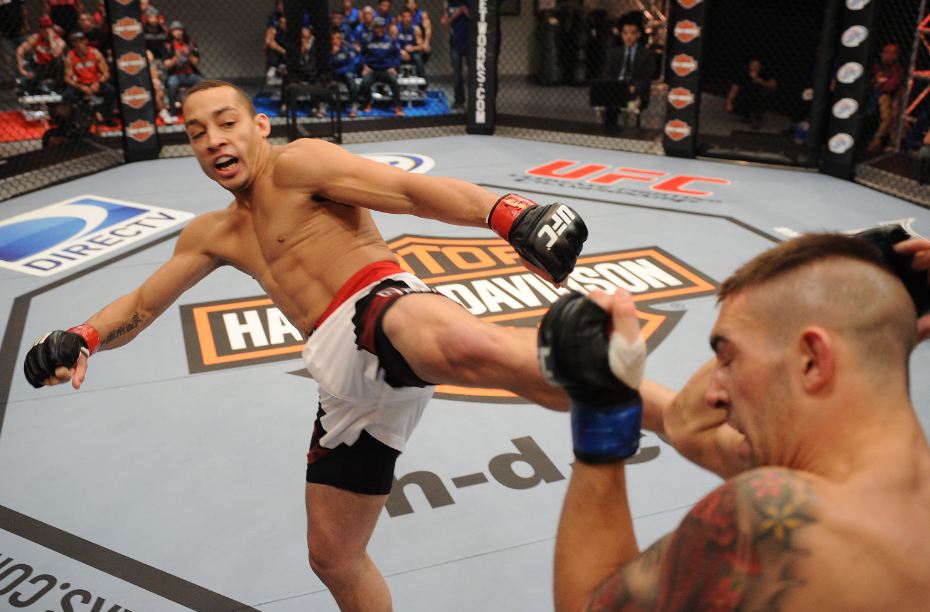 I have to say that this is a pretty good week for myself. Spring is in the air, my fiancé’s wedding shower is today where I may get my much anticipated fondue set and the Downes Side returned. Most of all, though, I get to write the Ultimate Recap Live about an episode that featured our favorite reality TV show personality Chris Tickle.

Some people have been complaining that the new format of the show limits the ability of  storylines to develop but I think they’re wrong. Just look at the intro of episode 6 here. It begins the way I think that all episodes from now on should -- Chris Tickle looking up and saying, “Coach, I got diarrhea.” Provocative storytelling!

While Larsen may be the next Walt Whitman, our buddy “Bad” Tickle wastes no time taking over the show. Obviously intoxicated at the fights, he starts talking trash at everyone and everything he can. Dominick Cruz tells him to shut his mouth and Tickle responds, “I’m just being me!” Yes you certainly are, and please don’t change.

We then get a little glimpse into the Cruz/Tickle relationship. It’s interesting to say the least. It’s like the Odd Couple if Felix and Oscar were chosen by one of those VH1 reality TV shows like Flavor of Love. Cruz can’t stand Tickle, but says, “I actually love the guy.” Tickle doesn't like being coached, and Cruz has been pushing him hard all season. Naturally, Tickle then pulls Cruz aside and asks him to push him harder leading up to his fight. Cut to: Chris Tickle eating corn dogs.

While the Cruz/Tickle relationship could use a talk from Dr. Drew, we then see how teammates Mike Rio and Justin Lawrence get along. Rio has had a bum knee throughout the season and wishes that Coach Cruz would just give them a light day once in a while. Lawrence thinks Rio is soft and tells the 30 year old that in MMA, “You’re done at 30.” They later have an altercation at practice where sparring pretty much turns into a fight with gloves. Rio gets the better of the exchange, but at least Lawrence didn’t end up like this guy. Cruz explains that he orchestrated this on purpose, too, since Lawrence is so good that he's not used to having to bounce back, but he'll need that when he's in the UFC. 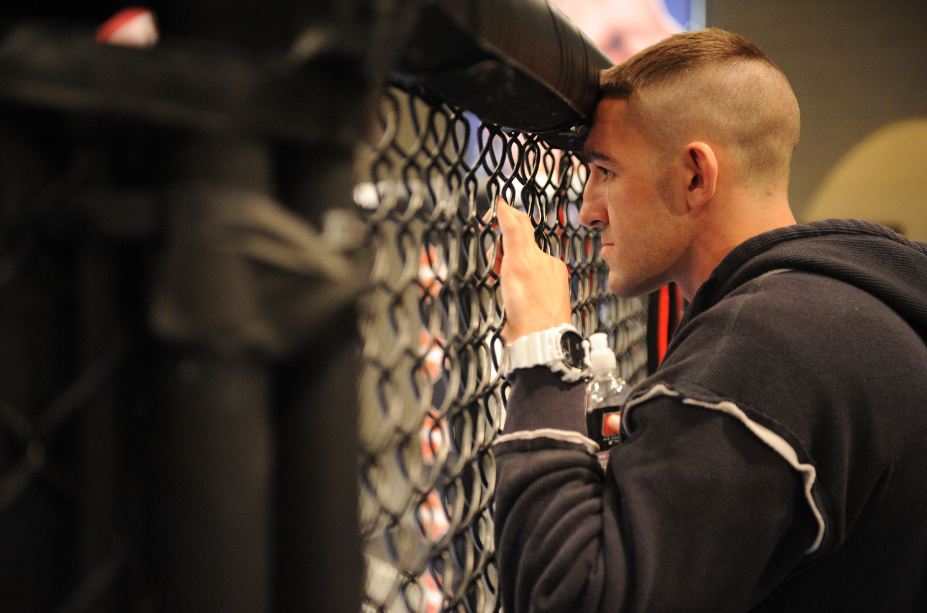 Joe Proctor then tells his story. Born to alcoholic and drug abuser parents, his dad is now clean and they have a strong relationship. Despite all the turmoil growing up, Proctor exudes a calm and stability. Urijah Faber sums it up perfectly when he says, “Always beware the dog with no bark.” Proctor gives me a little pause for concern when he tells us, “I’m a ground guy, but I love to bang.” Hasn’t he ever heard of Andy Wang?

Next we see how the TUF guys spent their Easter Sunday. It mostly involves water activities around the pool and creating a makeshift Slip N Slide out of yard bags. Tickle is preparing a turkey dinner for the guys and tells his story. He was in and out of jail, drank a lot and and claims that, “MMA saved my life.” He also explains how he’s a self-taught fighter whose only coach has been YouTube.

Cut to Team Cruz’ training where Dominick stresses the importance of Tickle avoiding takedowns. He knows that Tickle is a brawler and his best chance of winning is standing there attacking. Coach Cruz also worries about Tickle not pacing himself and gassing early. Weigh-ins are much less eventful than anticipated. Tickle eats a slice of pizza on the scale and during the stare down, he asks Proctor, “Smell my pizza?”

Now it’s fight time and we get a quick glimpse into the locker rooms. Cruz tells Tickle to avoid throwing body kicks and Faber stresses the importance of footwork. Tickle doesn’t bring any props for the walkout, but if you look behind them, you can see how nicely the coaches’ portraits have evolved. I think Urijah Faber should try rocking that handlebar mustache in real life.

Round 1 -- For a self taught fighter, Tickle actually looks all right. He’s definitely a brawler and throws big wide shots, but a few of them find their mark. Tickle gets the dominant position on Proctor clinching against the cage and hurts him with a right hand off the break. I think that was all the motivation Proctor needed to remind him, “Oh yeah, I’m a ground fighter.” The velicoproctor gets the the takedown with a minute left. The jiu-jitsu videos that Tickle watched must have been Melvin Guillard vs Joe Lauzon because he gives his back up immediately and Proctor sinks in the rear naked choke. Tickle fights the choke briefly, then taps out, giving Team Faber three wins in a row.

Dana briefly gives his thoughts on the fight and had Tickle winning it. Urijah Faber talks and congratulates Tickle for not being a poor sport and taking the loss responsibly. I think it’s nice that we give people credit for things they’re supposed to do. That’s why I’m pitching my, “Hey You Haven’t Gone to Prison!” card line to Hallmark this week. After that next week’s fight is announced and it’ll be John Cofer vs Vinc Pichel. Will Team Faber keep control? WIll “Bad” Bad Boy Tickle show up and raise more trouble? What will be the first thing eat with my fondue set? Find out this and more next week!

In the meantime, follow me on Twitter @dannyboydownes, the show @InsideTuf, read my blog and leave some comments. I’ll try to respond, but you’ll never know what can happen after my aunts knock back some mimosas....