*Recaps are not in fact live. 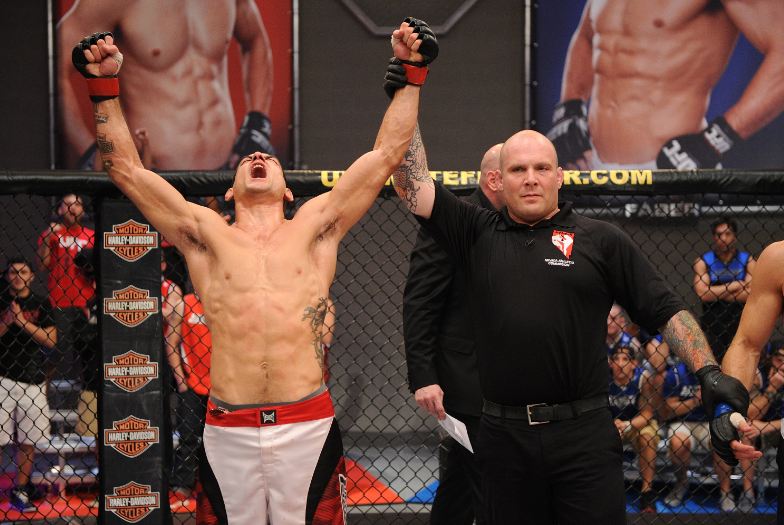 Hey everyone, Danny Boy Downes back with another edition of The Ultimate Recap: Live! Let the record show how much I sacrifice to give all of you the best MMA reality show recap on the internet. Not only do I stay in repeatedly on Friday nights to watch the show (I have friends...maybe), but I even cancelled my plane ticket to North Carolina for the International Whistlers Convention (IWC). In all fairness, I probably would have been kicked out anyway because there’s no way I can comply with #12 on their Code of Ethics.

After three wins in a row, Team Faber is feeling confident. While they may be whistling Dixie, Dominick Cruz is visibly upset at losing another match. Right after the fight, he decides Chris Tickle needs “tough love” and yells at him in the gym in front of members of both teams. Now, I know I give Tickle a hard time on this column, but I don’t think that immediately after the biggest loss of his career is the right time to criticize him. But what do I know? I thought Sylvester Stallone deserved an Oscar nomination for his role in Rambo: First Blood.

In the aftermath of Tickle vs Proctor, we see the first real conflict between Faber and Cruz. Faber tells Tickle quite audibly that he did a great job and, “Don’t let anyone get you down.” Cruz does not take kindly to this. He calls out Faber on his record... and his fashion choices. Later in the locker room, Dominick apologizes to Tickle for coming down on him, but the damage may have already been done. It’ll be interesting to see how things go forward.

We then cut to life in the TUF house and see that the cabin fever is really starting to affect Andy Ogle. He says he’s meditating, but it looks more like someone having a bad trip at Burning Man. He then gives his future defense attorney a stomach ulcer by telling the other guys how he had a dream of his girlfriend getting murdered. Now, perhaps I’m just too private of a person, but there are some things you don’t share. It’s like this week when I asked a stranger how their day was going and they proceeded to tell me about how they recently amputated someone’s toe and gave details like, “it’s way easier to cut off someone’s toe than you think.” Just say, “Things are going well, how about you?” and be done with it.

After the commercial break we see Brittney Palmer reading something on a tablet. My first thought is, “I bet it’s Charles Dickens or a critique of Ayn Rand’s The Fountainhead,” but it’s only the TUF twitter account. Cut to Team Cruz’ training during the week and Vinc Pichel’s background story. He explains that he got the nickname “From Hell” from his mom because he got in a lot of trouble and arrested growing up. Two things: 1) How many parole officers have to come to TUF training sessions? 2) I wonder if Mrs. Pichel introduces him at family parties as, “Vinc from hell.”

The only thing tougher than raising Vinc Pichel is Sam Sicilia’s training session. He’s clearly struggling, and Cruz says, “We have to keep him confident,” but after seeing Cruz' drill-sergeant-like coaching style, I'm struggling to picture his version of positive reinforcement.

Things are going a bit smoother at Team Faber’s camp as John Cofer tells his story. He focuses on how important wrestling was for him, “It taught me mental fortitude.” Faber doesn’t give the most resounding endorsement when he says, “He’s not the most dangerous guy in the world.” The strategy for this fight is for Cofer to, “be safe on his feet” and get the takedown.

The “Team Purple” friendship between Team Faber's Michael Chiesa and Team Cruz' Sam Sicilia is a cause for worry for some of the guys in the house. They’re concerned the two friends will leak gameplans to one another. This worry then causes Ogle to transition from murder hallucinations to fits of paranoia and he confronts Chiesa. Chiesa assures him that he’s not going to give any information away and that tin foil hats are a great way to make sure the CIA doesn’t read your thoughts. Also, the government adds fluoride to our drinking water to keep us subservient. I thought this was a little over the line, but I thought Nick Lachey and Jessica Simpson were going to be married forever.

Weigh ins come without issue and Dana White makes an appearance. He then gives a speech that will surely make him a shoe-in for the commencement address at Harvard. While I don’t have it fully transcribed, I think most of you can imagine how it goes. Let's just say it's a reprise of his famous "So you want to be a f#*(ng fighter" monologue from season one. Some people may think that this is an unprofessional way for a president of a company to act, but you should hear Warren Buffet talk. That man makes the Osbournes look like the Jehovah's Witnesses that came to my door last month.

It’s fight time and as round one starts and you immediately see that Cofer is the aggressor. He keeps coming forward and pushing for the tie-up. Pcihel does a great job moving around and counter punching. This pattern continues for the rest of the round. There aren’t any real significant strikes but Pichel does have some visible damage on his face. In the last ten seconds Pichel flurries, but I give the round to Cofer for keeping his opponent on his heels.

Round two sees Pichel take a more aggressive posture and doesn’t let Cofer dictate the pace like the first round. Cofer gets a takedown with about two minutes left, but can’t get the finish. Pichel is able to get back up, there are a few more exchanges and the round ends. The judges have it tied up and we head to “sudden victory.”

The round begins, Pichel tags Cofer early and you know immediately that this one is going to end soon. Pichel puts Cofer on the fence, gets a takedown and finishes him with an arm triangle 43 seconds into the round. The only thing more impressive than that third round from Vinc is how casually Jon Anik says, “And Cofer’s dream is over.” Read fight report

We get to next week’s matchup and it will be Sam Sicilia against Chris Saunders. They have a quick staredown and Andy Ogle runs around in the background in a wrestling singlet. Will Team Purple move onto the quarterfinals together? Who is Chris Saunders? What’s the over/under on Andy Ogle before he starts walking around naked ranting like the Kony 2012 guy? Find out this and more next week on The Ultimate Fighter Live!

In the meantime, be sure to follow me on Twitter @dannyboydownes, the show @InsideTUF, my blog and catch me live blogging UFC 145 tonight here. Also feel free to leave some comments about the show or your favorite whistler. Personally, I’m a fan of David Morris, although you can’t deny the skills of Chris Clackum...