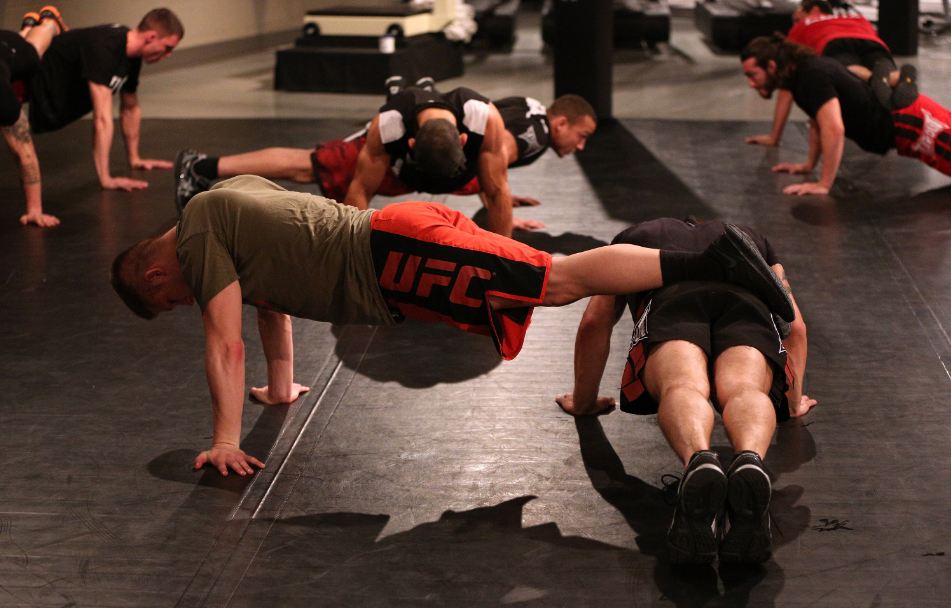 I’m back for another edition of the Ultimate Recap Live, and not just because I spent my rent money on Mega Millions tickets without winning a cent. Well, actually that’s most of the reason, but let’s both make the best out of a bad situation.

The show opens up with a recap of last week’s fight. Dana criticizes BJJ black belt Cristiano Marcello’s stand-up gameplan and calls kickboxer Justin Lawrence a real contender. The fighters themselves have your typical reactions. Lawrence is downright giddy. I’m pretty sure if they continued the tape we’d hear him say that he’s going to use the $5000 bonus to buy a box full of lottery tickets. Don't do it, Justin! Marcello is disappointed, but he knows that the season is still young and wants to help train his teammates any way he can.

The coaches then review the choice for the current fight -- Al Iaquinta vs. Myles Jury. Cruz doesn’t help his Count Dracula moniker by saying that he wants to, “Go straight for the jugular.” Faber feels that Cruz overreached in this selection and simply says that when he heard the announcement he thought, “Yes! Thank you.”

We then get a look inside Team Cruz’ training. Dominick sums up his training philosophy as , “If you grind yourself to the bitter end, the fight is easy.” The guys on the team talk about how Cruz pushes everyone. A highlight here is when Dominick tells someone to, “Pick it the [expletive] up,” in the most casual way possible. If they didn’t beep it out of the broadcast, I would have thought he was just asking about the weather.

The downside of training to the limit, though, is that injuries happen. That’s exactly what happens to Mike Rio. Sparring with Myles Jury, he catches a spinning backfist that causes his knee to buckle under him. Cruz brushes it off by saying that “he’s hurt, not injured,” but I’m not so sure that the distinction would be widely recognized by the medical community.

We cut back to the house where the guys are dealing with the cabin fever that comes along with being on a TUF season. Andy Ogle writes love letters, Cruickshank stuffs his face and Myles Jury is a loner. The guys show their true desperation by playing charades. Honestly, I never knew people actually played that game. I just thought that it was one of those things that only happen on TV and movies -- like how playing in toxic waste gives you super powers. Well, at least this lesson didn’t make me sterile...

From there we have Iaquinta’s training montage. While it may have lacked the cinematic flair of a Journey song, we do learn that he has no plans on being defensive in this fight.

We watch another snapshot of Rio trying to work through the knee injury. He says that he doesn’t want it to get in the way, but it’s clearly affecting him. Again, Cruz doesn’t seem too sympathetic.

Back at the house, Urijah stops by and brings a life coach to talk to everyone. Our buddy Tickle is none too impressed telling us, “I don’t need no damn life coach.” Doth the Tick protest too much!? Sadly, this is the only real Tickle-ing we get this episode.

From there, Jury’s training package starts. He, too, says that this his strategy will be to force his opponent to go backward. Later, as Team Cruz gets ready to break training for the day, they interrupt him in the shower and the cameraman gives viewers an uncomfortable up-skirt angle of Jury’s towel.

Back at the house, Team Faber is already looking ahead to next week and saying that they should take out Rio because he’s “old” and “hurt” (Rio: 30. Faber: 32.) Ogle says that he’ll take the fight because he wants revenge against Rio for beating his friend to get into the house, but I call BS. That’s like saying you’re going to the Chinese Buffet by your house for the ambience and the decor.

The fight begins and Iaquinta sticks to his gameplan just like he said. He keeps moving forward and doesn’t give Jury a lot of space. Myles does a decent job countering, but he seems too hesitant to let his strikes go (something Cruz criticized him for earlier). This continues for most of the round until about a minute left when Iaquinta puts in Jury in what wrestlers call a spladle (pictured above) and what everyone else in the world calls a "what the eff is that?!" Jury eventually escapes and the round ends.

Round two opens with a low blow that slows the pace, but it soon picks up. Although both fighters start to open up more, Iaquinta is still the aggressor. Jury continues to get pushed backward, but shows nice movement by not getting pinned on the cage. Unfortunately, halfway through the round he starts to noticeably slow down and Iaquinta capitalizes and catches him with some strong shots as the round closes.

The fight is scored a draw after two, so we head to the “sudden victory” round. Calling Jury gassed would be an overstatement, but he definitely doesn't have much pep left. I think the long pause between the second and third round while they calculated the scores likely contributed. Iaquinta controls the third much like he handled the second -- he pushes forward and Myles doesn’t answer back with much. Even though I thought he clearly took the third, the judges give Iaquinta a split decision win and Team Faber earns their first victory. Read fight play-by-play

The only thing more frustrating than MMA judging is Jon Anik trying to get an answer to his questions in the post fight interviews. Iaquinta says that if he wins the best-fight-of-the-season bonus, “I’m gonna go finish college just like grandma wanted,” and Jury just rambles on about whatever he wants. We head to the fight selection where Urijah Faber opens by saying that he chose this matchup because it would be an easy
fight, but then immediately backtracks by saying everyone there is tough
and, “Anything can happen.” Although he's trying, it seems Urijah  just doesn’t have it in him to really insult people (paging life coach Chael!). He then reveals that next week’s contest will be between Mike Chiesa and Jeremy Larsen (Cruz' last pick).

How will Chiesa keep his emotions in check after the death of his father? Can Team Cruz bounce back from their first defeat? Will the cameraman make one of the coaches dress up as a pizza delivery boy for his next film? Find out next week!

In the meantime, be sure to follow me on twitter @dannyboydownes, the show at @InsideTUF and leave comments. Now if you’ll excuse me, I’m going to see if that cameraman has any job openings before they shut off my electricity...