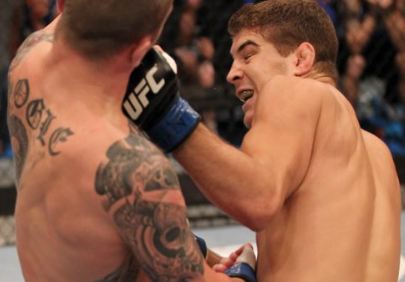 Two live fights and one big announcement are supposed to fit into an hour-long show, so there's little time for house hijinks,. After a quick look back at last week's upsets,  we get right into the background on tonight's first matchup.

Training sequence! Chris Saunders is a stand-up guy, and though he was Faber's last pick, his coach now says he could be one of the toughest. We get some heart-breaking background on Saunders' tough childhood, then cut to him emoting on the topic to unlikely life coach Andy Ogle.

Team Cruz' training sequence focuses on Vinc Pichel's strategy, which is, per happy-go-lucky-Dominick Cruz, to "take him to hell." Cruz outlines the subtleties of his approach, which include "brutalizing him," "beat the hell out of him," "blanket him," and "grind grind grind grind." Has being sidelined by an injury brought out the viciousness in Cruz' persona? Fortunately dark horse Pichel is a willing student of these dark arts, preferring to live his life one quarter mile at a time... he's never going back to prison. Wait, that last part was from The Fast and the Furious. My bad.

With no time wasted, we're on to the first fight. You can read the full play-by-plays here but in short: After a season of surprise wins by the underdogs, the universe balances itself with both favored guys scoring the Ws in what can be described as a night of the hellbows.

Pichel powers through two rounds to best a game Saunders. Both guys land their share of hinge joints and are bloodied by the end, but it's Pichel's combinations and aggression -- particularly in the second round -- that earn him the win. Next!

Prepwork for Al Iaquinta and Andy Ogle consists of Faber staying out of game-planning but training them both through the week, explaining that he'll pick random coaches to corner each guy on fight night. Ogle expects a war, and claims to not be intimidated from having trained daily next to first-pick Iaquinta. Faber says that Ogle's only hindrance so far has been his mindset, which is now as solid as could be, and that the Brit is constantly overlooked by his teammates. Ogle says that his plan is to hit, move, and make Iaquinta come to him. (Fans of irony may wish to fast-forward 6 minutes to see how that panned out.)

While Ogle says his heart will be what gets him the win, an intense Iaquinta says it's his own work ethic that will make the difference. Iaquinta trains with Phil Nurse as Faber muses on the Long Island prospect's unnerving poker face.

In the Team Faber vs. Team Faber semifinal, Iaquinta does as he pleases for most of a round to Ogle, before knocking him down twice in the final minute. The finishing blow is a nasty Jordan Mein-like short elbow to the temple (tune in to Strikeforce tonight at 10 ET/PT on Showtime!). Iaquinta seems agitated during the fight and enraged by his win, suggesting that his own dark side has yet to be explored in 2 TUF Live 2 Furious.

Post-fight, UFC president Dana White announces the two semifinal matchups, both of which pit a member of Team Faber against one of Team Cruz. First, lanky underdogs Mike Chiesa (Faber) and James Vick (Cruz) will clash. Next up, the two guys who won on this episode will fight: Al Iaquinta vs. Vinc Pichel. 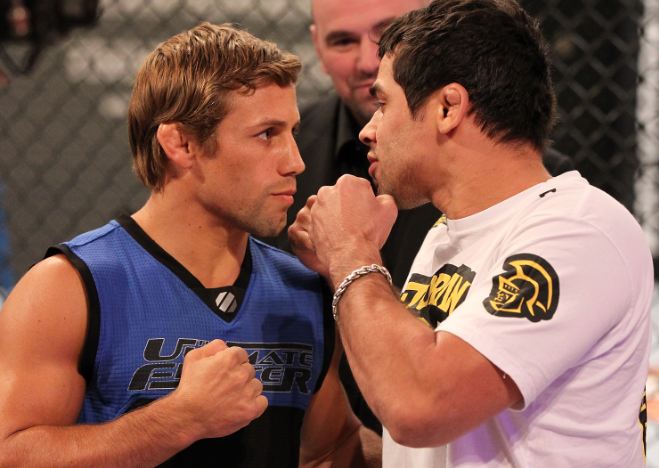 Then Dana makes the announcement everyone has been waiting for... who Urijah will be fighting for the interim belt. We cut away to a promo piece for Brazilian bantammonster Renan Barao, who's cruising a 31-fight unbeaten streak into this title shot. Back at the gym, Faber laughs at something off-camera, Dana apologizes for something we don't see, and Cruz looks sickened by the prospect of Faber having a chance at any belt whatsoever. And that's what puts the "live" in TUF Live, friendos.

That's it until the semifinals next week, when Danny Boy will return with a belly full of free continental breakfast and a heart full of relationship tools. Complaints about the quality of this piece should be directed at @DannyBoyDownes and the summaries within in no way reflect the positions of @InsideTUF, @FXNetworks, or the Zuffa empire.