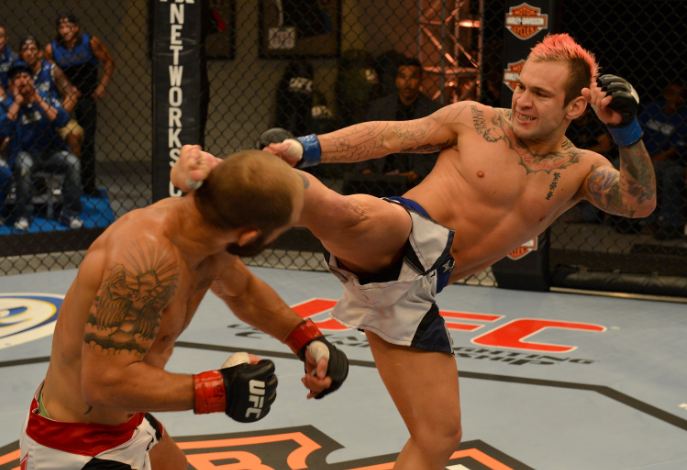 As April draws to a close and the flowers come in bloom, Danny Boy Downes here to brighten up your life with another edition of the Ultimate Recap: Live! When you think about it, my articles have a lot in common with flowers: They make you feel better, serve as a great “I’m sorry” present for your significant other, and lose all relevance after a couple weeks.

As the show opens, we recap last week’s fight between John Cofer and Vinc Pichel. For once, Dana actually agrees with the judges and approves of the decision to go to the third round where Pinchel eventually won via arm triangle. We get a glimpse into the post-mortem of the match and we see the coaches dealing with their respective fighters. Cruz is smiling again and shares his secret wisdom of, “make it a street fight.” While I personally don’t find that the most helpful strategy, it will come in handy once the UFC takes some hints from the show Robot Wars and adds a fire pit in the middle of the Octagon. Faber tries to comfort Cofer, who is clearly distraught at losing his big shot. Fortunately, he still has the presence of mind to flex those ab muscles hard during the interview. If there’s a coach who can teach you what to do with your shirt off, it’s Urijah Faber.

As they set up this week’s fight between Team Cruz’s Sam Sicilia and Team Faber’s Chirs Saunders, we first see Sam Sicilia hitting the heavy bag. Dominick Cruz compliments his punching strength and believes that he has the power to knock people out with every single one of his punches. Next, Strikeforce Women’s 135-lb champion Ronda Rousey walks in. She teaches the guys some of her Olympic-medal-winning judo moves which results in every guy on Team Cruz saying something to the extent of, “she’s a beast.” As Rousey and Cruz leave training, Faber quips that he hopes she took it easy on Dominick, which sets off another confrontation between the two coaches. Cruz comments that Faber only knows how to “throw overhand rights and guillotines,” then apparently starts the opening lap of the Parking Lot 500 as he peels out of there.

We then see the TUF house events during last week’s UFC 145 event. Rousey initially worries that she’s stepping into a lion’s den, remarking, “ I feel like the goat from Jurassic Park.” Fortunately for her, it is less of a frat party and more like a grade school dance. No one even sits next to her. While I completely approve of TUF guys acting like gentlemen and “leaving room for the Holy Spirit” as Fr. Fairbanks used to say, it does make for dull television. I mean, Rousey even gives Tickle a softball “salted nuts” reference and he does nothing. They never have these problems at the Real World House...

Next is a look into Team Faber’s training and the story behind Chris Saunders. Faber says that he has a lot of talent, but that his biggest weakness is “that he doesn’t believe in himself enough.” I’m surprised that Faber is that generous to him. I mean, Saunders calls himself “The SoCal Kid.” There has to be some type of gimmick infringement there. They say that their gameplan will be to tag and go and not stay in place engaging Sicilia.

As the show comes back from commercial, Jon Anik tells everyone to follow the show @InsideTUF and we get a gratuitous chest-centered camera angle on Britney Palmer. After the boobs, we see how the TUF guys pass their downtime with a montage of pranks that I have to say are pretty lame. Saran wrap on the sink? Supergluing Chapstick to dresser? Shorts in the freezer? Looks like the only reading material in the house is a set of practical joke books from the 1920s.

From there we get an insight into the life of Chris Saunders. He grew up impoverished and never had a stable family growing up. He lived in multiple foster homes and really struggled. A natural follow-up to the prank scenes.

Sam Sicilia then shares how he entered the MMA game. He admits that he didn’t take it too seriously at first but has really dedicated himself in the last year. He even discusses how he fought 11 times in the past year and 3 times in one month. Coach Cruz compares him to the Tasmanian Devil and says, “He’s green, but he’s so athletically gifted and all he does is go, go, go.” He then gives their gameplan and makes judicious use of adjectives, telling him to set a “stupid, ridiculous, obscene pace.” If they didn’t have to edit for time I’m pretty sure it would have continued with, crazy, awesome, unbelievable, ludicrous, erotic, absurd, unreasonable, impressive, lewd, cool, radical pace.

Interestingly enough, a lot of those adjectives apply to what happens next. Coach Faber’s teammates on Team Alpha Male move all the workout equipment into Team Cruz’s locker room and proceed to have an intense strength and conditioning session. In their underwear. As a prank on Dom. Perhaps the lack of understanding of what constitutes a good prank goes all the way to the top this season. Both teams and their assistant coaches then walk in on this. Cruz admits that it was “pretty smelly” while Chris Tickle is tickled by the goings on and looks like he wants to join. Let’s just review this: an attractive blonde MMA champion is their midst and they’re silent. Four guys jump around in their underpants and they all stare.

Weigh ins are uneventful and then it’s fight time. In round one, Sicilia shows his Tasmanian devil side and swings big repeatedly and pressures Saunders. They tie up on the cage and after reversing positions a couple times they break to the center, where Sicilia throws more bombs. Just past the halfway mark, Saunders lands a head kick that looks like it drops Sicilia cold. Bouncing his head off the mat must have woken him up, though, because he works his way to top position and tries for a darce choke until the round ends.

Sicilia still charges forward at the beginning of round two and embraces the Team Cruz philosophy of “make it a street fight.” Saunders has enough of this and starts working for takedowns more. He eventually gets one, but Sicilia soon gets back to his feet. Once there, he drops Saunders with a hook and pounces, looking to finish the fight. Saunders gets his wits about him quickly and reverses position. The fight ends, and I think we’re heading to round three for sure. The show comes back from (to my surprise) we have a decision-- Saunders by split decision. Read fight results

Then our “Little Engine that Could” of MMA reporters Jon Anik climbs in and tries to get the fighters to open up. Saunders says that, “everything went exactly as I thought." Apparently he thought he was going to get hit in the face a bunch. Sicilia says that he didn’t trust his wrestling enough and gives Anik the “leave me alone” look. Dana White returns to his judge-harshing ways, saying afterward: "Everyone but the judges believed this should have gone to a third round. I praise the judges when they do a good job and I rip the judges when they get it wrong. They got it wrong tonight. Both guys fought like hell and deserved a third round."

Next week is the final match of the first round as Mike Rio of Team Cruz faces off against Andy Ogle of Team Faber. How will Rio’s injuries affect him? Can Andy Ogle get his mental focus back? Why did Ogle wear that singlet? Will Chris Tickle one-up Team Alpha Male and start practicing naked? Find out this and more next week on The Ultimate Fighter Live!

In the meantime, follow me on Twitter @dannyboydownes, the show @InsideTUF and catch my blog here. Also, make sure to leave some comments. Last week, someone said that my columns are uncreative and immature...but that’s not what his mom said.