Danielle De Rossi, midfielder of AS Roma and Italian National Team player and Alessio Sakara, UFC athlete known as "Legionarius", joked around in front of the video cameras of Roma Channel exchanging ideas about their passion for UFC, global premier organization in the promotion of Mixed Martial Arts. 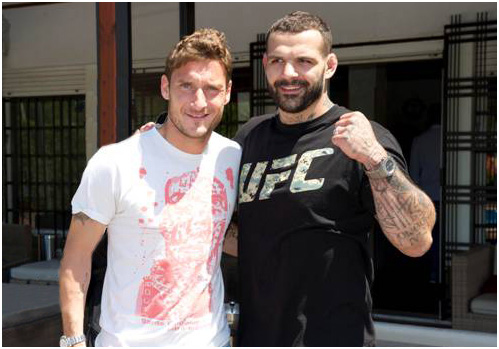 Francesco Totti and Alessio Sakara
"MMA is a sport that fascinates me", explained De Rossi "Like all contact sports, they are tough but at the roots of combat is a loyalty and respect between the athletes.  With Alessio, however, I would only compete against with my playstation", De Rossi continued referring to the UFC video game Undisputed 3, which features Alessio Sakara as a character.

"Behind a sport like MMA there is a physical preparation that is 10 times that of football" - the Roma midfielder continued.  "It is a sport where you have to be an athlete that is 100%, its not hard to be submitted by your opponent, so you have to stay focused at all times". 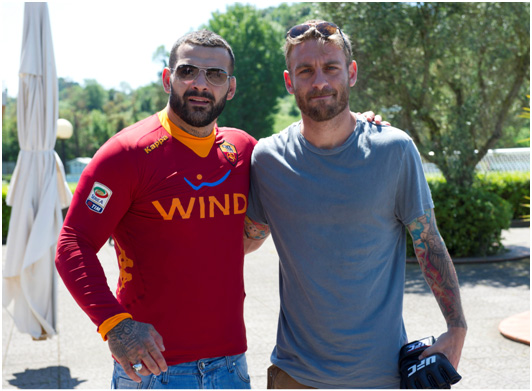 Alessio Sakara and Daniele De Rossi
"Rome is my city and I'm very happy to be here today.  When I spoke about Rome however, I don't just mean my city, I mean the whole empire.  I am in love with what our ancestors left us and it si thanks to them that Rome is such a popular city today.  Roman fighters, Legionarius, are my inspiration because I aim to always have the same determination that they had during battle," Alessio Sakra explained.

During their meet and greet, Sakara and the young footballer exchanged UFC gloves and an AS Roma jersey baring De Rossi's team number.

A meeting between Roman athletes that pride themselves of an ever growing stars and stripes background.  Infact, AS Roma has recently been pruchased by the American Thomas DiBenedetto, born in Boston with Italian origins.  This summer, AS Roma will be visiting Boston, Chicago, and New York with a series of friendly matches.