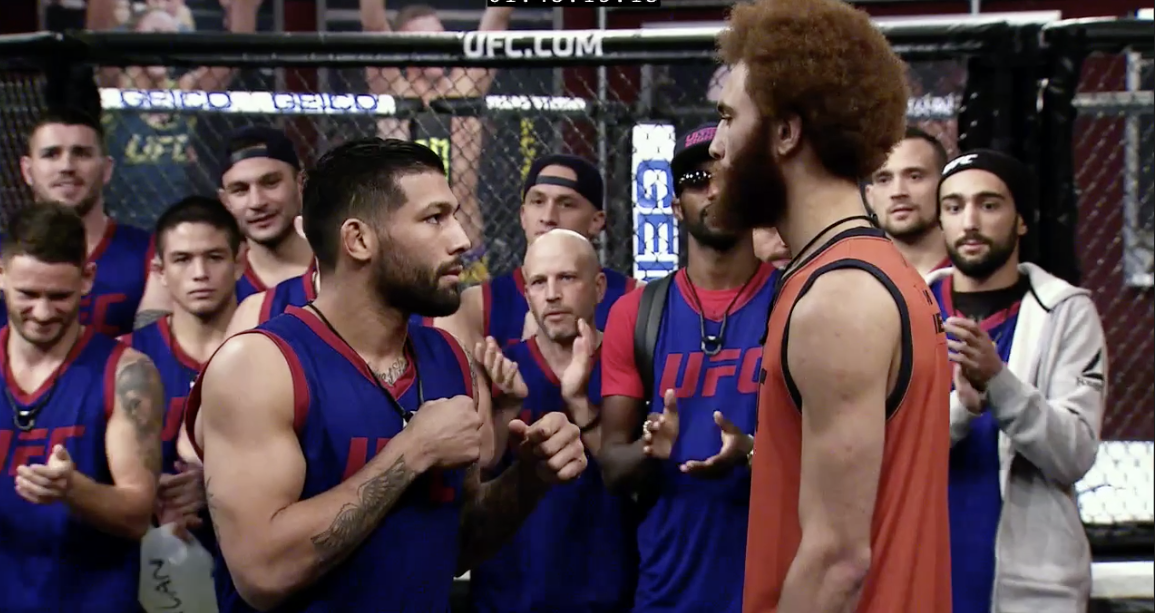 The Ultimate Fighter" align="center" />
It's been a tough start to the season for heavyweight champion Stipe Miocic and his team after dropping the first two fights of the season, with featherweight Kyler Phillips falling in last week's bout to Team Cormier's Brad Katona.

In the upcoming episode, Team Miocic will put hard-hitting Jose Martinez Jr. up against Team Cormier's Luis Pena in a lightweight matchup that will put the second 155-pounder into the next round of the tournament.

While it's definitely not unusual for teammates to end up facing off as The Ultimate Fighter pushes forward, it's a unique situation for Martinez and Pena this week after they actually became fast friends through the tryout process all the way through being selected for the show together. Unfortunately, Pena and Martinez were drafted on to separate teams, but they still believed that they wouldn't actually face each other until the live finale on July 6 from the Pearl at the Palms in Las Vegas.

Well it turns out that plan didn't work, as light heavyweight champion Daniel Cormier ultimately decided to put Pena against Martinez in the next lightweight fight of the season. Cormier's philosophy since the beginning has been putting the two best fighters into the Octagon together and letting the best man win.

In fact, when the season first got underway, it was Cormier who suggested to Miocic that they fight out the season with each of their picks in the team selections going up against each other to see who really was the best of the best. Miocic didn't comply, but it seems Cormier is still determined to give each of his fighters the toughest possible test in the opening round before moving forward in the tournament.

Martinez will definitely offer that kind of challenge as he enters the tournament with a perfect 4-0 record after a whopping 13 amateur fights before turning pro.
RECAP LAST WEEK'S EPISODE | UFC MINUTE: PENA MAKES TUF DEBUT

Training and fighting out of Lorain - a small town in Ohio nestled against the shores of Lake Erie just east of Cleveland - Martinez has built a reputation as a hard-nosed, gritty fighter who isn't afraid of making it ugly if that means getting the win. Martinez won't likely wow anybody with his incredible technique, but his striking is nasty and his aggressive style has given more than a few opponents trouble in the past.

As Martinez enters the show this season he's also fighting for something greater as he competes to give his six-year old daughter Chloe a better life through his mixed martial arts career. Martinez is a dedicated father who drives two hours each way across the state to see his daughter as often as possible, and there's not going to be anything harder he'll face this season than being away from her.

But Martinez also knows this is his chance to make his daughter proud, so he's definitely going to take all the coaching Miocic can give him to help get a win in this latest lightweight bout.

As for his opponent, Luis Pena came to the show with a nickname that grabbed plenty of attention before anybody ever saw him fight. Pena is known as "Violent Bob Ross" - a moniker that was given to him after people started noticing that thanks to his hair and beard he really resembled the "Joy of Painting" artist, who was made famous through his public access television series where he always seemed to be painting a tranquil picture filled with happy little trees.

According to Pena, when he's not fighting, he actually embodies that same spirit as a laid back guy who just likes spending time at home with his pets and his girlfriend.

Pena was actually born in Italy, but was then adopted by parents in the United States, which is where he's grown up his entire life. Based out of a small town in Missouri, Pena has never had anything handed to him and fighting has been a passion project for most of his career, even living in the gym at one time while he was still an amateur.

Since turning pro, Pena is 4-0 with all four of his bouts ending by either knockout or submission. At 6-foot-3-inches tall, Pena will definitely have a height and reach advantage over every other competitor on the show and he also considers himself to be a very well rounded fighter who can give anybody problems on the feet or on the ground.

If there's one concern about Pena leading into the fight, it's one that Cormier raises with him in the latest episode due to the way he sometimes lets too much emotion bleed into his performances.

Emotion can be a weapon for certain fighters as they feed off that energy, but for others it can serve as the ultimate distraction and really cause them problems over the course of a contest. Some of the best fighters in the world have succumbed to emotion during a fight.

Even Cormier has admitted in the past that he allowed emotion to get the best of him when he was preparing for his first fight against Jon Jones. That's why Cormier does his best to detach himself from every opponent once they step into the Octagon together.

That's why Cormier might be the perfect coach to get the most out of Pena while helping him to control that emotional surge that could be a hindrance to him in this fight.

As for Martinez, he's never made it a secret that his favorite game plan is to push forward with aggression and make every exchange tough on his opponents. That aggression will likely serve Martinez well as he looks to get inside that long reach advantage that Pena will have during this fight.

Can Martinez find a way to topple Pena and finally put Team Miocic on the board? Will Pena's reach and size end up being a big problem for a smaller opponent like Martinez?

Tune in to the latest episode of The Ultimate Fighter: Undefeated tonight at 10 pm ET on FS1 to find out.