If there has been a “can't miss” episode of The Ultimate Fighter: Team McGregor vs. Team Faber, the most recent one was it, as Julian Erosa pulled off a massive upset by defeating Mehdi Baghdad, while tempers flared as Conor McGregor nearly took on all of Team Alpha Male after he said that bantamweight champion TJ Dillashaw was on his way out.

The genesis of the latter situation began earlier this season, as McGregor began poking at opposing coach Urijah Faber, telling him that the biggest fight he could possibly hope to land right now is a showdown with Dillashaw, who was his teammate and the current king at 135 pounds.

It's been well documented that Dillashaw recently announced that he's officially leaving Team Alpha Male to join the Elevation Fight Team in Denver, so it seemed - at least on the surface – like McGregor called his shot, and this week's episode was living proof that he called out the bantamweight champion for exiting the team who got him to the title in the first place.

It all started when Dillashaw arrived at the gym to help out Faber's team with drills and different techniques. As soon as McGregor got wind of it, he locked his radar directly on Dillashaw, Faber and the rest of Team Alpha Male for the perceived issues that have been simmering ever since Duane “Bang” Ludwig left the gym as the head coach. Dillashaw continued to work with Ludwig in his spare time and as he prepared for his last title fight against Renan Barao, and McGregor said that was only further proof that the bantamweight champion was on his way out - permanently.

"I certainly feel TJ's a little snake in the grass. He's in here for his own benefit," McGregor said. "Loyalty - that's the sign of a world champion"

McGregor's words finally rile up Team Alpha Male so much that current UFC bantamweight and Faber assistant Cody Garbrandt jumps up from his seat and shoves the interim featherweight champion before the two teams leave the bench.  McGregor stands his ground, asking what Garbrandt is going to do exactly, and the situation is only defused thanks to European fighter David Teymur’s slip of the tongue with some accidental bad language due to his less than perfect English, which gets a laugh out of everybody involved. 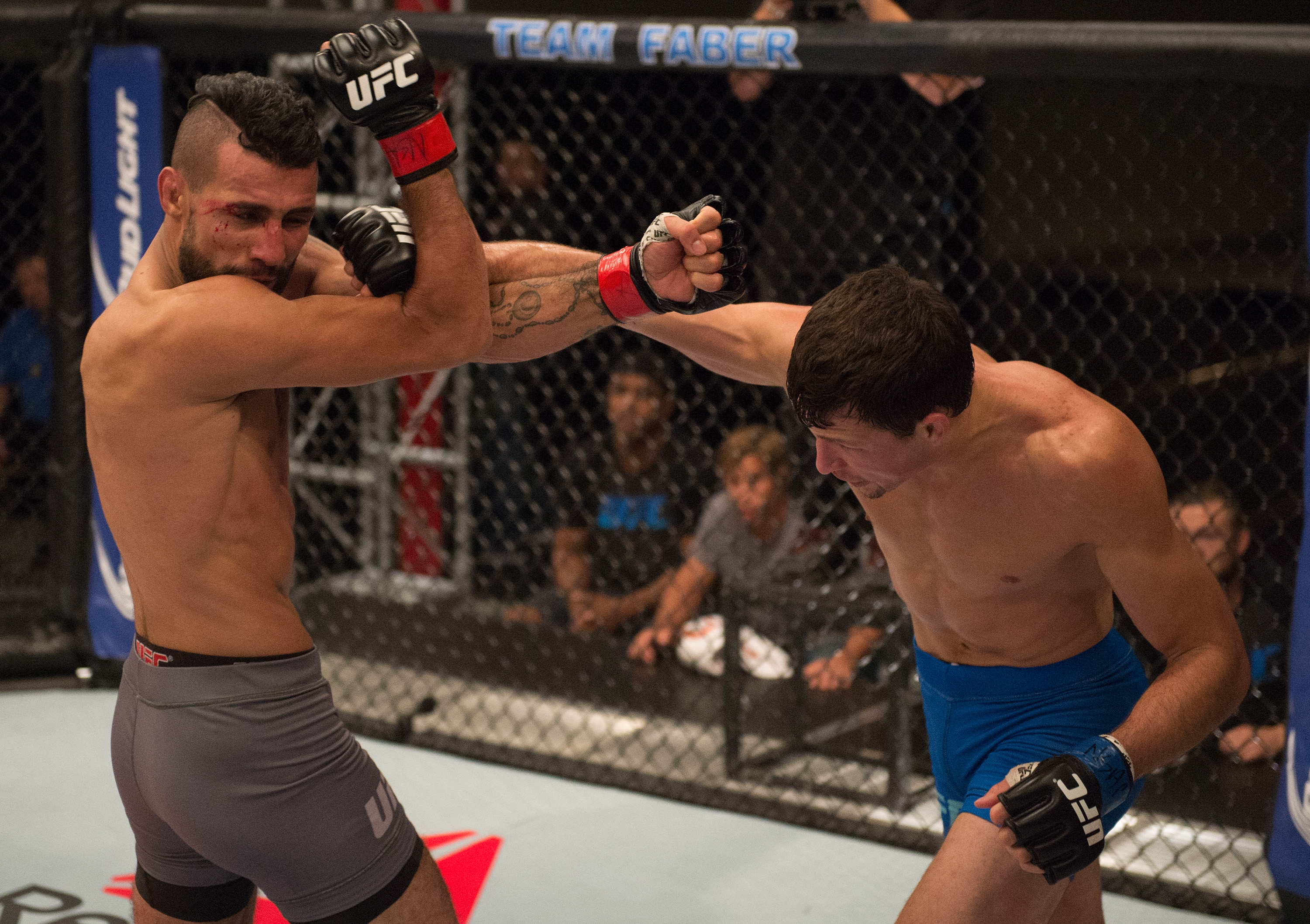 But just because the altercation is over, it doesn't stop McGregor from voicing his opinion to Dillashaw, who happened to be out of the room when the shoving match ensued. McGregor was accused of talking trash about Dillashaw while he wasn't around, so the outspoken Irishman went right after the bantamweight champion the moment he stepped back into the gym.

"You pretend you're still there. You ain't still there," McGregor shouted at Dillashaw.

Admittedly, Dillashaw wasn't shocked that McGregor targeted him as soon as he showed up this week, because his now former teammates gave him the heads up before he arrived. Obviously, Dillashaw didn't expect a physical altercation to happen, but he knew McGregor was going to fire away at him with both barrels.

"I've been aware that Conor has been talking crap to Urijah about me being a snake and trading teams and going out to Colorado to train," Dillashaw said. "I've been expecting him to say something"

Say what you will about his methods, but considering Dillashaw's exit from Team Alpha Male, it looks like Mystic Mac, who claims to “predict these things,” got another one correct.

Once the situation between McGregor, Dillashaw and basically everybody else on Faber's side cools down, the focus shifts back to the fighters in the competition and the bout going down between European lightweight Mehdi Baghdad and Julian Erosa.

Baghdad was definitely confident as soon as the fight was made, although his prediction that he would “hurt” Erosa only fired up the American as soon as he got back to his locker room with his teammates and coaches.

Current quarterfinalist Ryan Hall agreed with Erosa that Baghdad was just showing off for the sake of the cameras, but that once you pushed him around and made him work, the European lightweight would wilt in the face of the pressure.

"I think (Julian) is tougher than Mehdi, who is probably at the core a little bit of a (expletive)," Hall said of Baghdad. 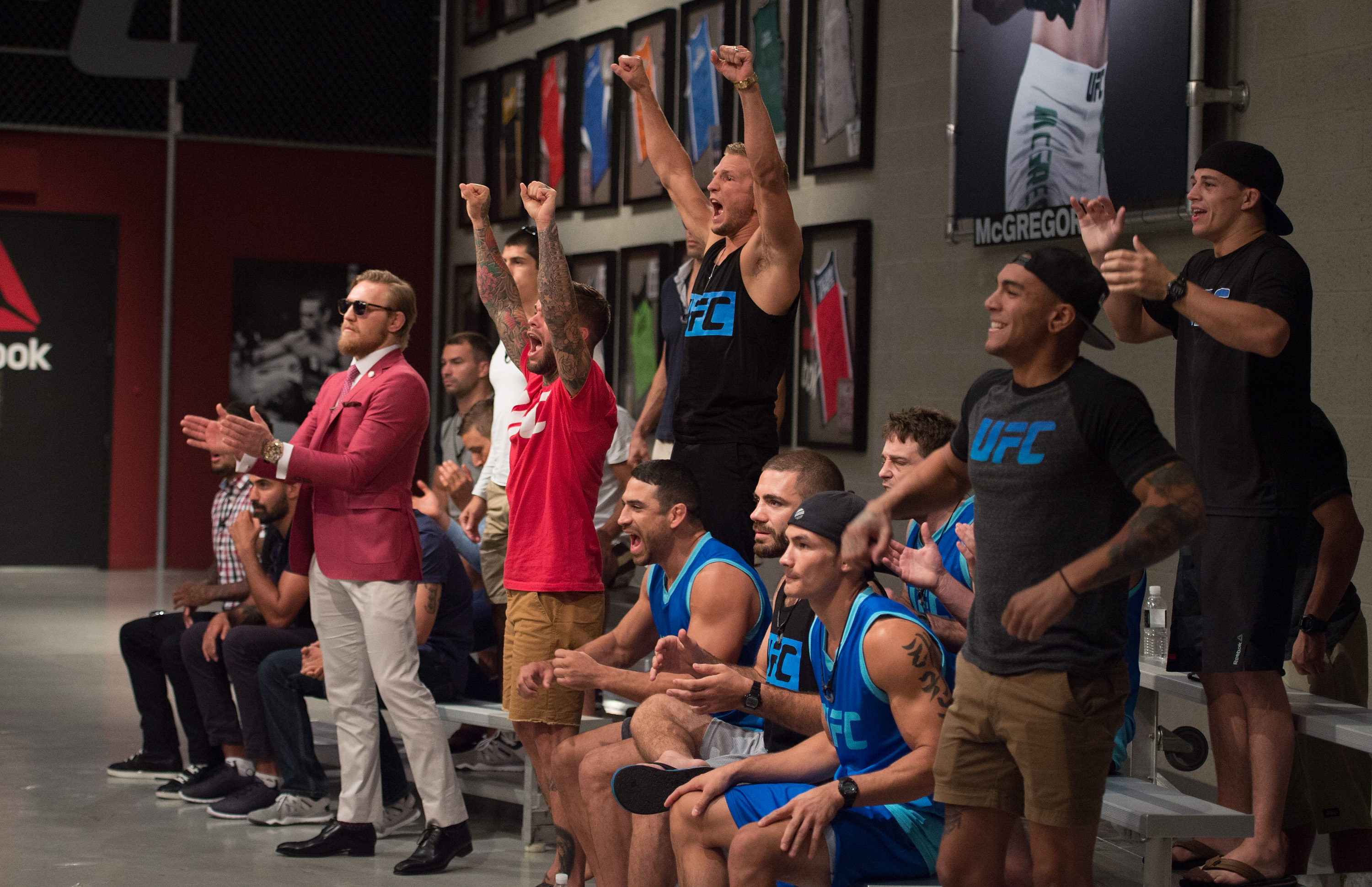 Meanwhile, Baghdad doubled down on his prediction on how he planned to slice and dice Erosa and send him packing from the competition.

While Baghdad continued to train and get ready this week, Erosa did benefit from having Dillashaw around as an assistant coach as he prepared for a huge fight to move into the quarterfinal round of the tournament. Erosa was definitely the underdog going into his fight, the same way Dillashaw defied the odds when he took out former bantamweight champion Renan Barao in May of 2014 before doing the same (or perhaps even worse) the second time around when they met in July.

Erosa certainly approached his fight with Baghdad with a lot of confidence and it showed from the very start of the bout, when he refused to back down from the former K--1 kickboxer while returning fire with a stiff jab that continuously popped the European in the face.

Where Erosa did his best throughout both rounds was keeping Baghdad at distance and peppering away with quick combinations and a stiff jab that really set the tone for him the entire fight. Baghdad certainly had his moments with a couple head kicks that could have been deadly if they landed flush or if Erosa had moved just a few inches to the left or right when avoiding the strikes.

It appeared that Baghdad landed the bigger, more powerful strikes while Erosa clearly landed more punches throughout. When it was all over, a third round could have easily taken place, but instead the judges opted for volume over damage and gave Erosa the victory by majority decision.

It was a huge win for the American side after Team McGregor stormed back with wins in each of the last two weeks.  Now with his team back in control, Faber selected noted striker Thanh Lee from his team to take on tall Swedish submission specialist Martin Svensson.  Lee had one of the most impressive fights to get into the house and he could be one of Faber's favorites to push deep into the competition, but first he has to get past a very tall Swede with a nasty ground game.

Who wins this next matchup between Team Faber and Team McGregor? Tune into The Ultimate Fighter next Wednesday night on FS1 to find out.