What brings you guys to Vegas and to The Ultimate Fighter in particular?
Rapinoe: FOX is going to be showing our games this summer, and they told us about the show. So we just came to check it out and see how things worked behind the scenes. We picked their brain and they picked ours a little bit. It was a really good experience for us.
Leroux: Yea same situation. It was really cool to see the similarities that we have and obviously the very big differences. So watching it has been a good experience.
What are some of the similarities and differences you guys noticed?
Rapinoe: We just talked to the girls a little bit about being a female athlete and the struggles of that. You don’t always 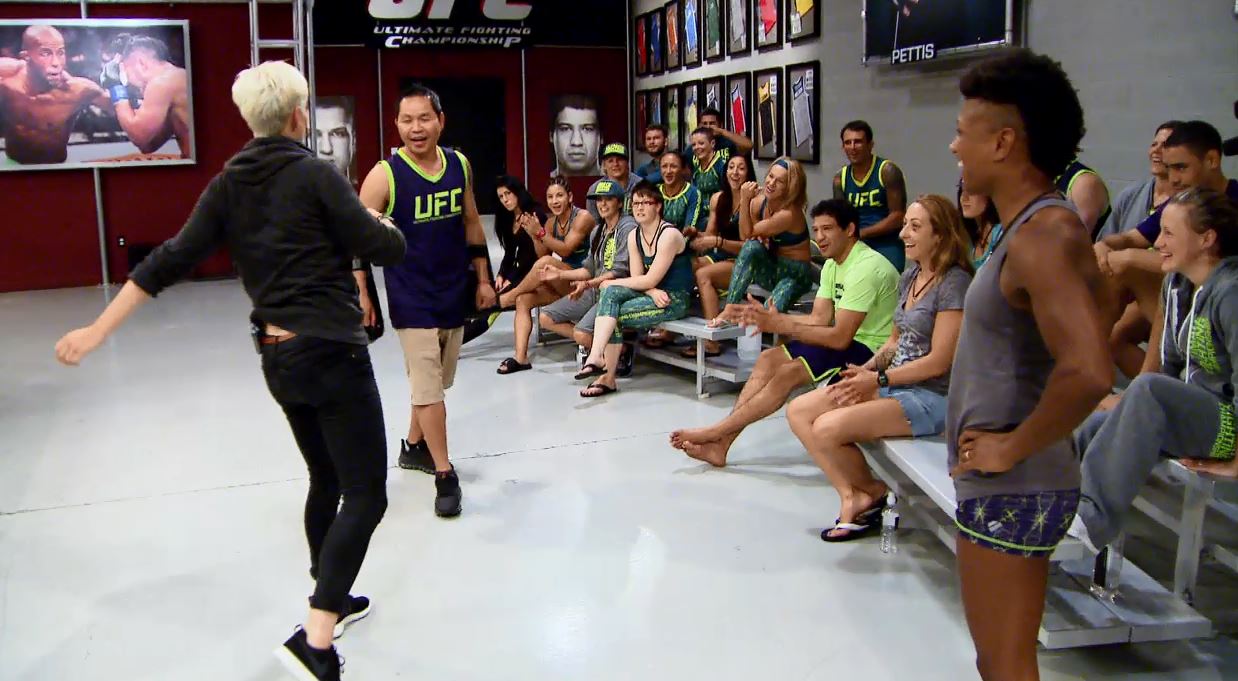 get the recognition you deserve and the struggles of managing where you live, and train, and your personal life.
Leroux: Same issues for sure.
You, like all the contestants here, play a male-dominant sport. What type of advice did you give to the women of The Ultimate Fighter?
Rapinoe: I think it’s really cool. I mean, the UFC does an amazing job being a pioneer of getting women into the sport and promoting it. Obviously, in the past it’s been the guys, but I think it’s amazing and they need to keep doing that and keep supporting it. One of the things we said was that the biggest struggle was getting people there, getting people to watch because sometimes people don’t know it exists. So to have this show, on FOX, and have the UFC promote is just amazing. It’s not just going to skyrocket these women, it’s going to showcase that these are badass women who are amazing at what they do and they deserve to be in the limelight like that.
You guys are both Olympic medalists and your used to spending time away from home. What advice can you give to cast about staying focused?
Leroux: You’re here for a reason, right? It’s our love for the game and for the sport brought us here and I think that’s what you have to go back to. Of course, you have a life outside soccer and outside of MMA. And it’s important to realize you will have life after this and you will be able to spend that time doing what you want. But I think for right now, if you really want to put your heart into something, you might as well go full force.
Rapinoe: Yea take advantage of it now. I think for both of us, our careers are going to be super long in terms of the span your real life. Maybe 10 of 15 years of your life, then you have the rest of your life to do whatever you want. So you really need to take advantage and totally dive in and take every opportunity you can.
So are you big fans of the UFC/MMA or is this your first experience?
Rapinoe: I actually am!
Leroux: We are really into it! I love it.
Rapinoe: I’ve been watching the UFC forever. I haven’t seen a lot of the female fights, obviously, but I will definitely tune in to this season. I’m a totally big fan, I love it. I’m a big jiu-jitsu fan. I like when it’s technical, tricky, and fighters still maintain their power and brute force. It’s so tricky, so sick. You can be on your back or whatever… 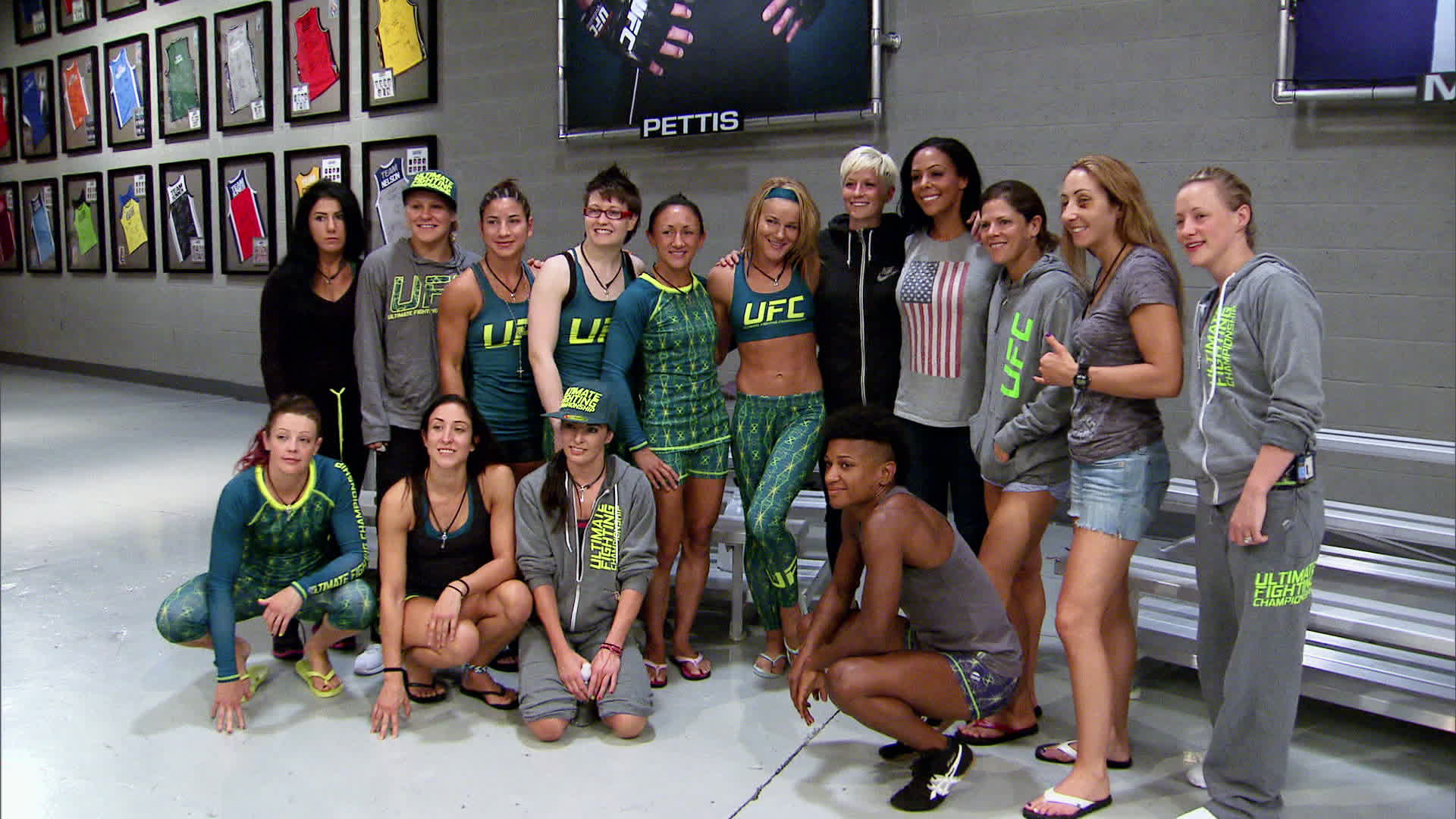 Leroux: Then boom!
Rapinoe: Right, then you’re choked out and your arm is broken.
Leroux: I saw GSP fight and it was amazing. What they put into it, ya know, is unbelievable. I’ve seen a few in real life. Actually, the last fight was in my hometown of Vancouver and we were playing a game against France. I would have been at that fight for sure if we didn’t have a game.
Very nice! And who are your favorite fighters?
Leroux: I don’t really have a favorite. I mean, it was GSP, but I really do think he maybe lost that fight [against Hendricks]….(laughs)
You think so? Maybe….
Leroux: Yea, he definitely lost that fight. I really like him though. Woodley, I like him too. There’s a bunch I really enjoy watching.
Rapinoe: I like Silva a lot. He was just totally dominant, he has so much personality, and he was cocky but he could back it up. I felt like he had everything.
So you guys are playing on a team, and trying to accomplish a common goal. The Ultimate Fighter contestants, however, will be fighting one another and will come out with one person as champion. What advice can you give them about handling numerous different personalities and keeping your head focused on accomplishing what they came here for?
Leroux: We deal with different personalities to all come together to be one team, so it’s very different. Especially when you have 11 very big personalities, trying to get on the same page can be tough. So maybe it’s easier when it’s an individually thing and you know it’s just you. But there’s something amazing about being a part of a team.
Rapinoe: I think it is a little different because they do have to eventually fight each other…
Leroux: Teammates AND friends.
Rapinoe: But they do need help. They need grappling partners, they need sparring partners and they have this amazing 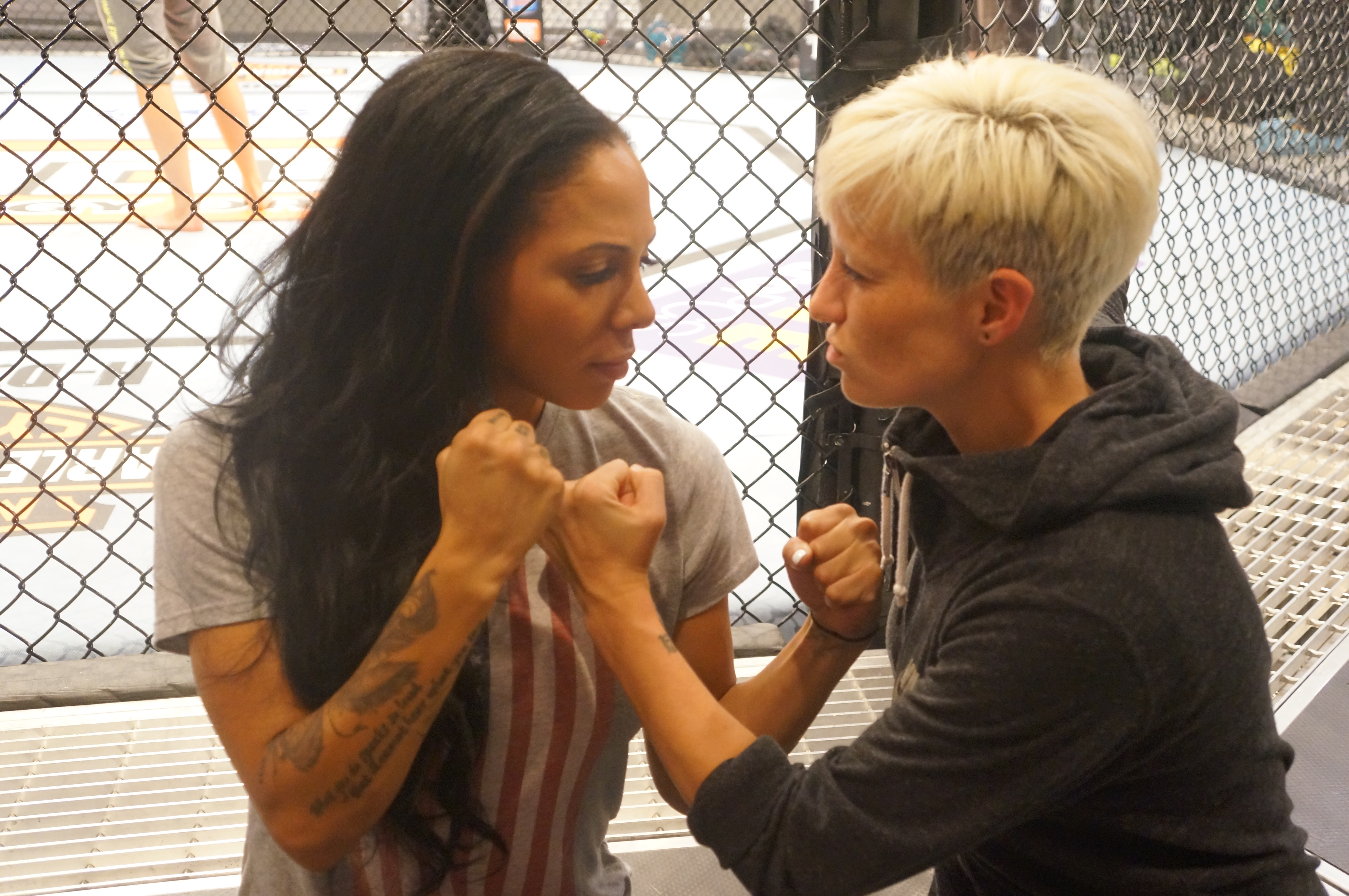 opportunity to be in this environment. But it’s never good to have enemies like that. I think they are in a pretty unusual bonding experience.
So we talked a little about training and staying focused away from home. Touch on the important of nutrition and making sure the things you put in to your body are helping you on game day or fight night.
Rapinoe: I think it’s just as important as whatever you’re doing on the field or in the Octagon. The recovery side, the nutrition, staying hydrated…
Leroux: Taking care of your body…
Rapinoe: I think when you’re a little younger you can get away with it a little bit more but it slowly starts to catch up to you. When you are really in a good place with your recovery, your sleep, and your nutrition, you really feel it on the field.
Well it was great catching up with you guys. We’ll have to get you both out to the finale in December!
Rapinoe: We'd love that!
Leroux: That'd be cool!
UPDATE: Leroux, Rapinoe, and the Women's National Soccer team topped their CONCACAF World Cup qualifying group and will take on China PR in the 2014 Brasilia National Tournament on December 10th.