Another semifinalist is now set after Dhiego Lima earned a hard fought, three-round decision win over teammate Gilbert Smith on the latest episode of The Ultimate Fighter: Redemption.

It was a grueling, back and forth three-round war between two of the toughest competitors on the show, as Lima and Smith gave it everything they had in an attempt to punch a ticket to the next round of the tournament.

Before the fight got underway, former bantamweight champion TJ Dillashaw had to figure out his role in the matchup because he was the head coach for both fighters. While some past coaches on the show have completely bowed out during a teammate versus teammate fight, Dillashaw decided the best way he could help would be to coach both of them in the lead up to the bout.

So Dillashaw helped get Lima ready for the fight by working on his striking and counter wrestling, and he simultaneously did the same thing for Smith by helping him with his grappling while dealing with his opponent's long reach and striking skills. It was an interesting dynamic, but Dillashaw told both of them up front that he felt the best way to help them would be to coach each fighter how to beat the other and then vice versa. Of course, when it came to the fight itself, Dillashaw would bow out completely and just become a fan in the stands while watching Lima and Smith duke it out for the spot in the semifinals. 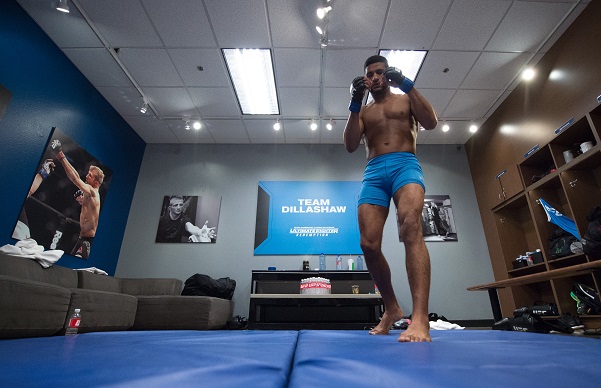 Before the fight got started, Dillashaw and bantamweight champion Cody Garbrandt came to the house and invited the fighters from both teams to join them on a party bus bound for a local hibachi steakhouse so they could get a night out on the town to unwind before the competition really heated up with the quarterfinals and semifinals just around the corner. Of course, Jesse Taylor had no problem enjoying himself, and the same could be said for Julian Lane, but the one person who wanted no part of the festivities was Smith, who stayed hunkered down in the back of the bus before doing the same in the restaurant.

Smith said he wanted to stay 100 percent focused on the task at hand, and even went to the bathroom to run in place just to keep his body loose rather than sit at the table conversing with the other fighters. As strange as it sounded, Smith came to this season of The Ultimate Fighter to truly earn his spot on the UFC roster, and nothing else was going to interfere with that agenda until the show was over.

Once dinner was done, it was time for Smith and Lima to lock horns in the Octagon

ROUND 1
The fighters exchanged strikes early, with Lima firing off a couple of hard kicks, including one to the head, but Smith showed solid defense in return. At just about the two-minute mark, Smith finally pressed forward for his first takedown attempt as he pushed Lima backwards against the cage before securing the legs to put him on the mat. Lima did a great job immediately working his way back to the feet after only staying on the ground for a matter of seconds. Lima then countered with a takedown of his own before catching Smith's back during a scramble on the ground, where he looked to take the back before searching for a rear naked choke. It was a fluid transition for Lima, but Smith stayed patient before working his way free from the submission attempt. Smith then countered with another takedown of his own once the fighters worked back to the feet, as he began landing some very solid punches on Lima before the end of the round. It was a close five minutes, but the edge went to Lima with his ground attack and submission attempt.

ROUND 2
Smith starts out strong in the second round by landing a series of hard, overhand rights that forces Lima to go for a takedown of his own. Smith gets out of his grip before reversing positions to get a takedown of his own as the fighters are caught up in a scramble between standing and going to the mat. Once they work back to the feet, Smith lands a nasty combination with a series of left hands and shots to the body as Lima tries to find a way to stave off his opponent's output. With Smith looking good through the first half of the round, he goes for a single leg takedown but Lima gets away from him before nearly taking his back again during the scramble. Once he's back on the feet, Lima nails Smith with a hard knee followed by a huge left hand. Smith eats the shot but time runs out in the round. Smith's dominance early likely earns him the round, which then moves them into sudden victory. 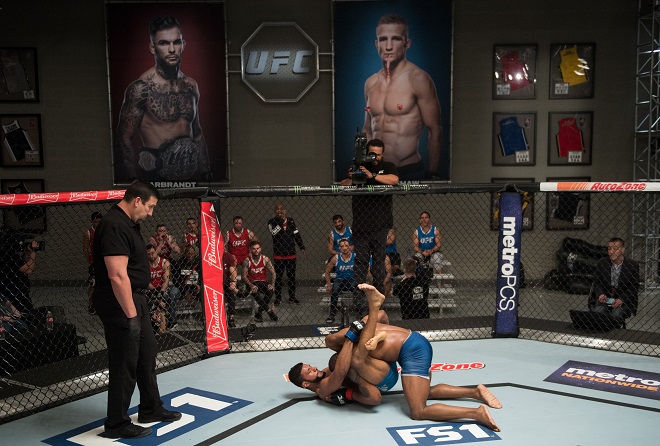 ROUND 3
Lima comes out much more aggressively this round and begins by sticking his jab in Smith's face consistently. The straight shots are landing and Lima follows that up by a few hard, stinging punches to the body that land with a thunderous thud to Smith's midsection. Lima's constant attack allows him to press forward with a takedown, which he gets with ease, before moving into the mount and then looking to take the back again as Smith tries to roll out of trouble. Smith eats a lot of punches before finally exploding out from the bottom and reversing positions. Unfortunately, Smith wasn't able to maintain control, as Lima quickly wrapped up a triangle choke that looked very deep, but he just couldn't quite get the submission. Still, the round came to an end and it was clear that Lima had done enough in sudden victory to get the win.

Dhiego Lima earns the unanimous decision over Gilbert Smith to move into the semifinals.

After the fight is over, Smith takes off his gloves and lays them in the center of the Octagon as he announces his retirement from mixed martial arts. He shares a moment with his fellow fighters in the cage as Smith calls it a career at the end of his run on The Ultimate Fighter. 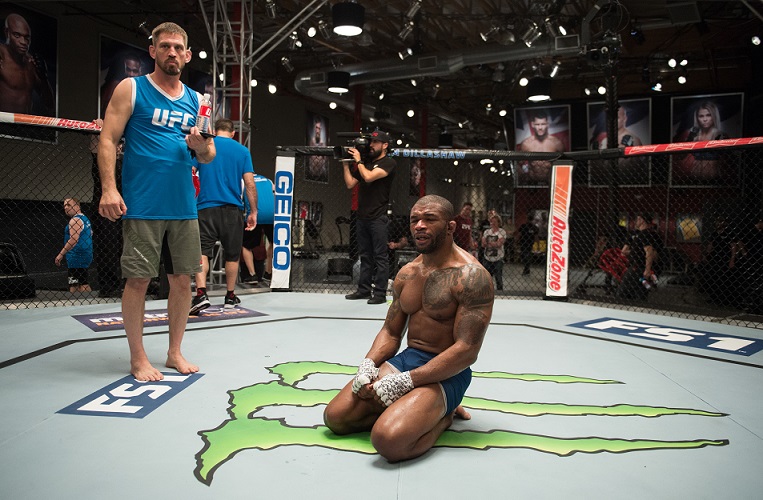 Next week, the action in the quarterfinals will really heat up, with the final two fights both taking place in one episode as Jesse Taylor takes on Hayder Hassan while James Krause faces off with Ramsey Nijem. It all goes down next Wednesday night at 10pm ET on FS1.