The wild card was settled, the quarterfinals were set and the first semifinalist was decided in the latest episode of The Ultimate Fighter: Redemption.

In an action-packed hour, the episode started with a focus on the wild card bout to determine the last quarterfinalist, as Team Garbrandt's Hayder Hassan faced off with Team Dillashaw's Joe Stevenson.

Both fighters fell in decisions earlier in the season, although Stevenson was in a particularly tough spot after he lost to Justin Edwards on last week's episode, which put him into a precarious position by making a quick turnaround. Still, TJ Dillashaw felt confident about getting him ready for the battle ahead with a serious power puncher like Hassan, who entered the bout with a significant size and reach advantage. 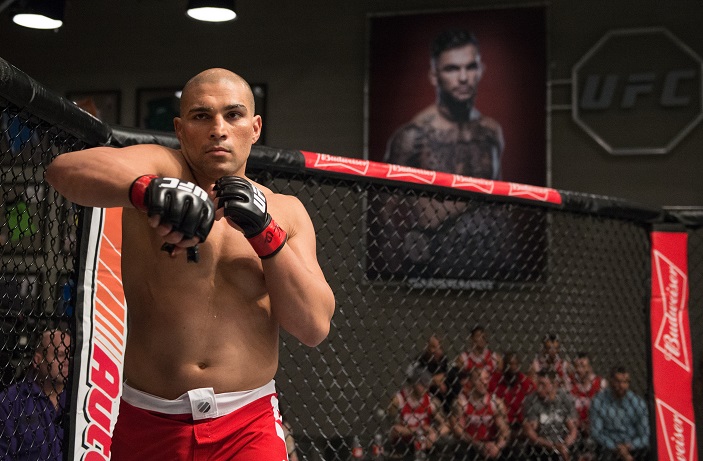 ROUND 1
It didn't take long for Hassan to establish his reach advantage by sticking a jab in Stevenson's face as soon as the fighters exchanged strikes for the first time. Stevenson immediately looked for a leg to get the takedown, but without setting up his wrestling, Hassan quickly shrugged him off and reset himself on the feet. Soon after, Hassan started looking to unleash his combinations and Stevenson got trapped backing up against the cage wall. Hassan unloaded a massive right uppercut that blasted Stevenson, which immediately dropped him to the mat. Hassan followed up with a few more strikes, but the referee saw enough and called a stop to the contest early in the first round.

Hayder Hassan moves into the quarterfinal round while Joe Stevenson is officially eliminated from the competition. 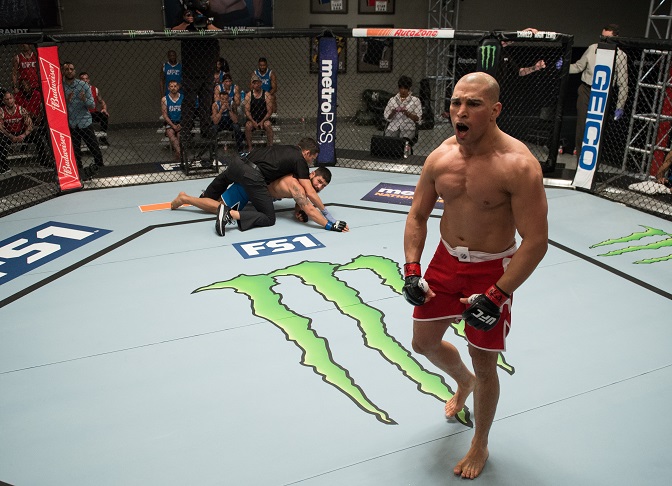 After the fight, Garbrandt began yelling at Dillashaw about putting Stevenson into harm's way when he warned him not to allow the former Ultimate Fighter winner to get back into the Octagon so soon after a loss just a week earlier. Dillashaw didn't take too kindly to Garbrandt's timing, especially after Stevenson suffered a loss that ended his dream to win this season of the show.

Cooler heads eventually prevailed, and with Hassan's victory it was time for the quarterfinal matchups to be announced. The next four fights are as follows:

Before the next fight in the competition could get started, it was time for the coaches challenge, which involved a game of tetherball while Garbrandt and Dillashaw attempted to stand on a balance beam without falling into a pool of water. To add a little extra drama to the competition, Las Vegas was dealing with some unexpectedly cold weather, which meant the water was going to be extra chilly for whoever fell in during the game.

On the line was $10,000 for the winning coach and $1,500 for each of the fighters on the victorious team, but maybe most importantly for Garbrandt and Dillashaw were the bragging rights the winner would get.

Garbrandt finally got dunked under the water after falling off his balance beam and he believes that was the key to his downfall.

"I think it really was my hair being messed up. That's my kryptonite," Garbrandt said after the game was over.

It didn't help matters much that Ramsey Nijem started talking trash from the sidelines and distracted Garbrandt, but when it was all over, Dillashaw got the victory 10-8 as he earned the coaches challenge bonus and all the fighters on his team took home an extra $1,500 each. It was a sweet victory for Dillashaw.

Once the coaches challenge was wrapped up, it was time to move into the first quarterfinal matchup with Gallicchio taking on Edwards in a bout that seemingly saw grappler against striker. Gallicchio never got his shot in the UFC after his season of The Ultimate Fighter, while Edwards wants nothing more than to earn his way back following his release. Most importantly, the winner would move into the semifinals, just one more win away from moving into the final on July 7.

ROUND 1
As the fight got underway, Edwards immediately established his striking prowess by popping Gallicchio with several punches as the Team Dillashaw fighter's head snapped back in rapid fire succession from each shot landed. It was clear that Gallicchio was rattled from the punches, and Edwards continued to pour on the punishment. As Edwards pressed forward, he blasted Gallicchio with a huge right hand that staggered him and forced him to look for a sloppy takedown attempt. Rather than stand the fight back up again, Edwards went for a guillotine choke, but Gallicchio stayed patient and eventually worked his way free. 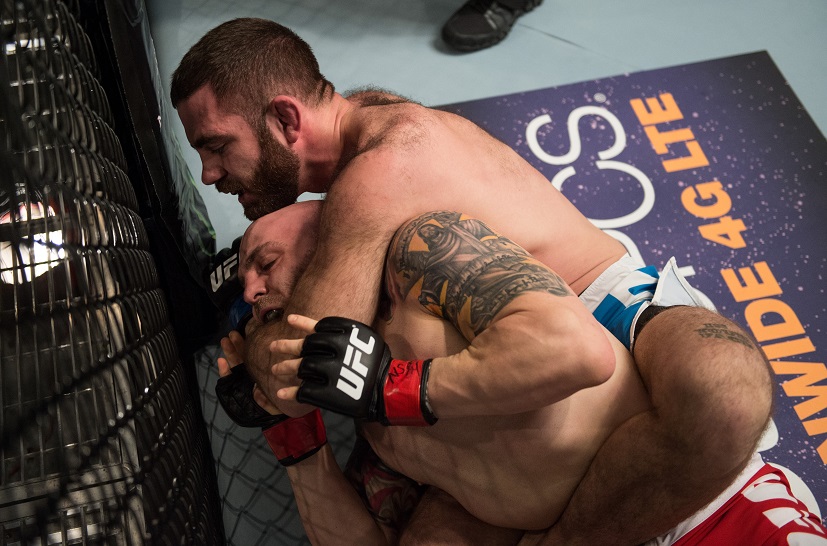 Once Gallicchio got out of Edwards' grip, he was able to slip around to take his opponent's back, which is exactly where he wanted to be in this fight. Gallicchio wasted no time getting a body triangle locked around Edwards' midsection before he started searching for a rear naked choke. A moment later, Gallicchio locked his arm under Edwards' chin and it was just a matter of time before he tapped out. The end came early in the first round as Gallicchio gets the win and moves into the semifinals.

Garbrandt was clearly frustrated that Edwards had Gallicchio hurt but then decided to go to the ground with him, which went against the game plan they set up for the fight. As for Gallicchio, he celebrated his second win and second finish in the competition, which has already netted him $30,000 this season.

Following Gallicchio's win, the next fight in the competition was announced as teammate faces teammate when Dhiego Lima takes on Gilbert Smith for the next spot in the semifinals.

It all goes down next week when The Ultimate Fighter returns on Wednesday night at 10pm ET on FS1.