The opening round of The Ultimate Fighter: Redemption tournament is almost wrapped up after Justin Edwards took out Joe Stevenson in a two-round battle last week, but with the quarterfinals about to begin there's still one more slot left to fill.

This week's episode will feature the wild card battle between Hayder Hassan from Team Garbrandt against Team Dillashaw's Stevenson, who makes a quick turnaround just six days after his last fight on the show.

Of course, bantamweight champion Cody Garbrandt didn't agree with the matchmaking, not only because he believed another of his fighters should have been placed into the wild card fight, but also because Stevenson just went through a two-round war and now he has to turn around and fight again just days later. Garbrandt fought for another of his fighters to be placed into the wild card slot, but UFC President Dana White ultimately made the call for Stevenson to get a second shot at redemption.

As for Hassan, this really could be his last shot after coming up short during his previous stint in the UFC and then losing to teammate Dhiego Lima earlier this season. Hassan has established himself as one of the premier power punchers to ever appear on the show, but his ground game has always been his weak point. Lima exposed that once again in their fight as he took Hassan to the mat several times over two rounds en route to a decision victory in the opening round.

It's not going to get any easier going up against Stevenson, who is best known for his wrestling and grappling, not to mention a slick guillotine choke that may be one of the best in the entire sport of mixed martial arts. Hassan will certainly enjoy a size, reach and power advantage in this fight and he'll need to use all three if he wants to keep Stevenson away from his legs while moving forward to look for the takedown. If Hassan can establish his striking early, he could earn another jaw-dropping knockout, which would certainly add to his already impressive resume.

As for Stevenson, there's been no better example of a fighter battling for redemption this season than the former Ultimate Fighter season two winner. After a long run in the UFC that included a lightweight title shot, Stevenson suffered several losses in a row before leaving the organization and briefly retiring from the sport. Stevenson has also admitted that he faced problems with alcohol abuse throughout his career, but coming back clean and sober now, he's had a lot to prove with his appearance on the show this season. 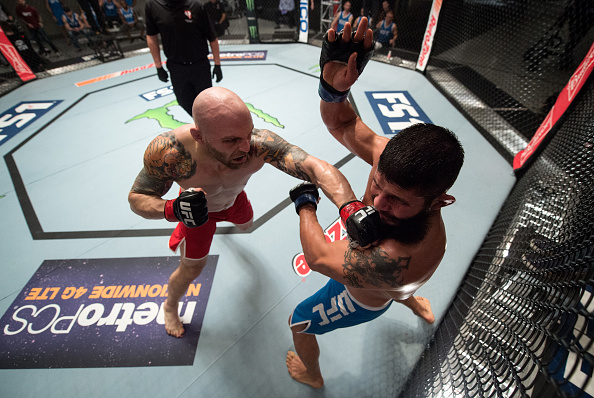 Unfortunately, Stevenson came up short in his first fight as he battled it out with Justin Edwards for two rounds. Stevenson had a few shining moments in the fight, but ultimately Edwards was just too much for him in the end. Things won't get any easier this time around, as Stevenson is still the smallest competitor on the show, competing at 170 pounds after spending the majority of his UFC career as either a lightweight or featherweight. Stevenson has to know that if he wants to have a shot to get into the quarterfinals, he has to take this fight to the ground, where he can negate Hassan's massive size advantage.

Stevenson is a veteran who comes from a time in the sport where fighters often competed out of their weight class just for the opportunity to find a worthy opponent. That experience and mentality will serve him well in this fight, but Stevenson has to be careful while going up against Hassan, who only needs one shot to connect to put a stop to the contest.

Once Hassan and Stevenson duke it out, it's time for the quarterfinal matchups to come together.

The result of the wild card matchup will be crucial to the next round because if Hassan wins, Team Garbrandt will put two fighters into the next round with Justin Edwards already in the quarterfinals. A win from Stevenson would mean that Team Dillashaw has seven fighters in the quarterfinals, which will put them into a very interesting situation with three separate matchups pitting teammate against teammate.
RECAP LAST WEEK'S EPISODE OF THE ULTIMATE FIGHTER

Tom Gallicchio, Jesse Taylor, Dhiego Lima, James Krause, Ramsey Nijem, and Gilbert Smith have already punched their tickets into the quarterfinals with Edwards currently the last man standing from Team Garbrandt. Even if Hassan gets the win, it will be interesting to see the two fights that will still take place between a pair of teammates to get into the next round.

One thing Garbrandt said earlier this season when matching Hassan up with Lima is that there are no teammates on this show and only one person will be able to live out their dream when this whole thing is over. It may be tough to see teammate face teammate, but with a shot at a UFC contract and $250,000 in prize money on the line, it's every man for himself.

In addition to the wild card matchup, the quarterfinals being announced and the first quarterfinal fight taking place this week, the coaches will also square off in the annual challenge, with Garbrandt and Dillashaw competing for a $10,000 grand prize as well as earning $1,500 for each of the fighters on their team. Dillashaw has taken a victory lap on the bantamweight champion when it comes to the competition while already putting six of his fighters into the next round, but can Garbrandt exact a little revenge in the challenge?

Many of these past competitions have been rather intense, so it will be interesting to see what White puts them up to this season.

Don't miss a minute of the action in this special episode, featuring two fights and the kickoff of the quarterfinals, tonight at 10pm ET on FS1.