This season of The Ultimate Fighter has already featured a couple massive upsets, but the past two weeks have seen a pair of heavy favorites move on to the next round of the tournament, with Jesse Taylor getting past Mehdi Baghdad a week ago and now No. 1 overall pick James Krause punching his ticket with a victory over Johnny Nunez.

Krause was actually supposed to take part in the second fight of the season, but unfortunately his original opponent, Hector Urbina, was unable to make weight, so he had to be replaced by Nunez, who was given extra time to prepare due to accepting the bout on late notice.

Krause was certainly an odds on favorite to do well in the competition considering he joined the cast as the only fighter this season who is already part of the UFC roster. The chance to return was really about redemption for Krause, who never got over his knockout loss to Justin Lawrence during season 15, when he was eliminated before event getting the opportunity to make it into the house.

As he recounted this week, Krause remembers an accidental clash of heads that knocked him senseless during one exchange with Lawrence and, at that point, he was fighting purely on instinct. It wasn't long after that Krause felt like he took an illegal knee as he was getting up from the ground, but the referee didn't pause the action and Lawrence went for the kill. A few seconds later, Krause was planted on the mat as the fight was stopped and Lawrence moved into the house.

"I feel robbed if you want the truth about it," Krause said about his first experience on The Ultimate Fighter.

That loss served as the only motivation Krause needed to accept an invitation to return to the show, despite already having a spot on the UFC roster. At home, Krause actually owns and operates a pair of gyms in Kansas City, where he works alongside several top UFC fighters, including last season's winner Tim Elliott, as well as current welterweight contender Zak Cummings. While the $250,000 grand prize for winning the tournament certainly wouldn't hurt his bank account, Krause promises that he didn't sign on to this season of the show just based on money. 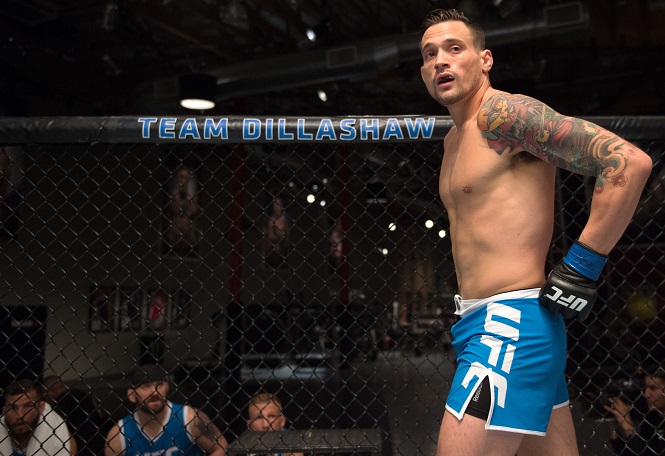 "I want to be exciting. I want people at home to want to watch me fight. That's why I'm here. I don't need the money," Krause said.

As Krause was preparing for his showdown with Nunez, Team Garbrandt was already in early preparations for the next fight of the season, as the bantamweight champion had control of the selection again this week. Rather than the outcome of the fights controlling the picks, the coaches alternate selections this season, and following Krause versus Nunez, it's up to Garbrandt to pair up the next set of opponents.
MORE ON JAMES KRAUSE: Krause returns to avenge first appearance | Krause: I'm here to win this tournament

Considering the string of bad luck Garbrandt and his team have suffered through during the first few weeks on the show, he doesn’t want anything more than as close to a guaranteed win as possible. When he asks his team who is ready to fight, season 21 finalist Hayder Hassan was the first one to raise his hand.

The American Top Team welterweight made quite an impressive during his season on the show with one of the most incredible runs in recent memory, but unfortunately he wasn't able to translate that success to his fights in the UFC. Hassan suffered back-to-back losses inside the Octagon, which prompted his release from the promotion last year.

Now he's back and itching for another chance to prove himself, so when Garbrandt was asking for a volunteer, Hassan was quick to say yes. What he didn't know, however, is that Garbrandt had designs on him fighting his American Top Team training partner Dhiego Lima, who is currently occupying a spot on Team Dillashaw.

As much as Hassan wanted to avoid fighting Lima in the opening round, he made an off-handed comment that it would be an “easy fight” if they actually stepped into the Octagon together and that immediately planted a seed in Garbrandt's mind. Before long, he was asking Hassan about the matchup because right now the bantamweight champion needs a guaranteed win to get back into the competition.

While Hassan was contemplating the possibility of fighting a friend, Krause and Nunez were finally ready to throw down.

ROUND 1
As soon as the fight gets underway, Nunez charges across the cage and starts head hunting on Krause, who has a significant reach and height advantage over him. By cutting off that distance immediately, Nunez looked to punish Krause before he even knew what hit him. The strategy nearly worked, as Nunez found a home for several hard shots that snapped Krause's head back as he tried to get his feet under him in the opening round.

Nunez did manage a takedown in the first round off a Krause stumble, but he couldn't do much with the position as the fighters worked back to the feet. While he was the smaller fighter, Nunez did an outstanding job of landing stiff punches again and again while Krause was doing his best to get out of the way. It looked like Nunez was primed for the upset until he made a crucial error charging inside when Krause grabbed his head and delivered a devastating knee strike. Nunez crumbled to the ground as Krause pounced on him, locking his legs around the back before looking for the rear naked choke.

Nunez tried to resist as best he could, but Krause was relentless until he finally wrapped up the submission and got the first-round finish. 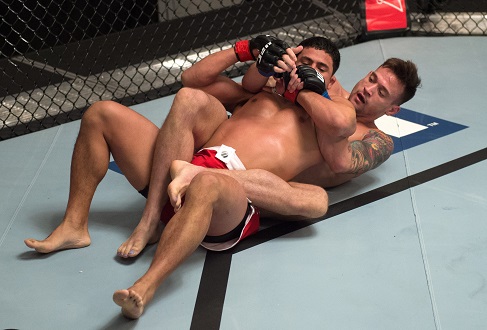 James Krause will now move into the second round following a rear naked choke victory over Johnny Nunez.

With Krause moving forward while putting Team Dillashaw up 4-0 in the competition, Garbrandt pulled the trigger on his controversial selection for the next fight.

He chose Hayder Hassan to take on his teammate Dhiego Lima next week.

"No friendships here," Garbrandt said after announcing the matchup.

Will Garbrandt's move finally earn his team their first win of the season or will the plan backfire with Lima keeping Dillashaw undefeated in the competition? Tune in to The Ultimate Fighter: Redemption next Wednesday night at 10pm ET to find out.