The final match for The Ultimate Fighter: Redemption is now set after Jesse Taylor and James Krause engaged in a battle to determine who would face Dhiego Lima for the season crown on July 7 in Las Vegas.

Ahead of the fight this week, Krause had plenty to celebrate after he was given clearance by the doctors from an eye injury that threatened to knock him out of the competition. Krause had suffered the injury during his previous fight with Ramsey Nijem. As it turned out, Krause's scratched cornea was healing nicely and the blurriness he experienced was just the result of the swelling from his eye getting better. So the good news was that Krause is cleared and he would be fighting Taylor for a spot in the finals.

Krause also got even more good news when TJ Dillashaw brought in Tim Elliott to serve as a guest coach for the week. Elliott is not only The Ultimate Fighter season 24 winner, but he's Krause's teammate back at home in Kansas City. Krause now has the added benefit of one of his own training partners in the corner when he steps into the fight with Taylor.

As time winds down this season, the fighters are all anxious to get out of the house and return home, but there are still a few days remaining, which means everybody is ready to party. That meant a trip to the hot tub with some cold beers for Julian Lane, Seth Baczynski and others who were having a few drinks ahead of the final bout with Krause and Taylor.

At one point, Lane and some of the other fighters ended up in a shouting match with Elliott, who was sitting a few feet away with Krause and UFC welterweight Zak Cummings. Elliott decided to take a shot at Lane and the fighters in the hot tub by pointing out that none of them were left in the competition and everybody sitting at the table was the "winner's circle."

The argument then boiled over to the house, where Lane ended up shoving Elliott and the other fighters intervened before a brawl broke out in the house. Justin Edwards also got involved as he went after Elliott for his loud mouth. Elliott was eventually pushed out of the house before the entire situation exploded, but that wasn't the end of things.

Then the chatter started between Baczynski and Krause, who were on opposite sides of the argument when it all unfolded. Krause took up for his teammates while Baczynski was irate over the taunts he received during the argument. Krause and Baczynski eventually went nose-to-nose, but thankfully cooler heads prevailed and the fighters separated before any punches were thrown.

Following an adventurous night at the house, it was finally time for the fight to begin as Taylor met Krause in the last semifinal matchup of the season. 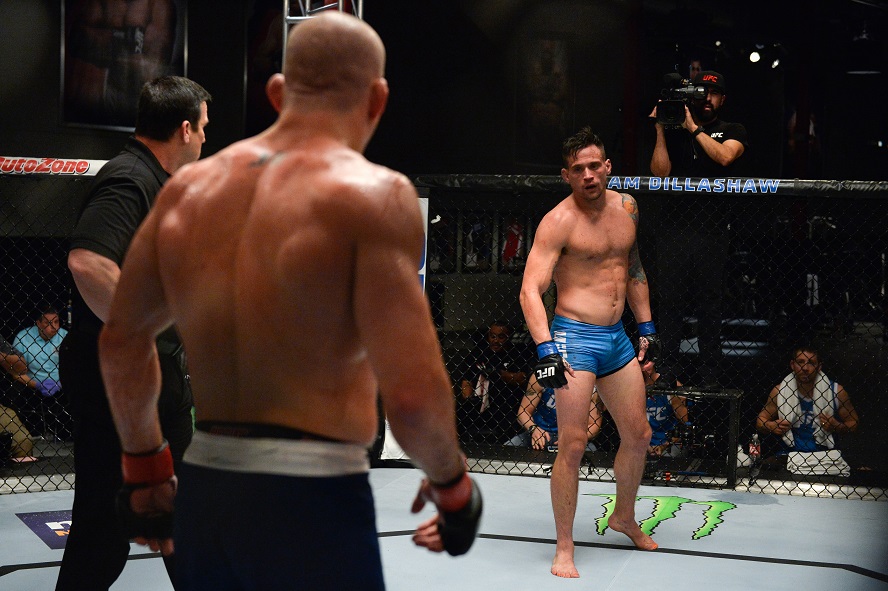 ROUND 1
Krause comes out of the gate with a surprising takedown of his own as he grabs a single leg and puts Taylor on the ground. Unfortunately, he's unable to hold the position for very long until Taylor reverses and he lands on top. Taylor methodically looks to pass the guard and lands a few short punches while not allowing Krause to gain a better position on the mat. In the scramble from the bottom, Krause is able to get a reversal of his own when he lands on top of Taylor. Krause starts looking for some hard ground-and-pound shots from the top while Taylor seems a little lost being stuck on the bottom. Krause engaged in a beautiful transition to take the back and it appeared he was going to get the rear naked choke, but Taylor pried a leg free and ended up with another reversal. Taylor is able to start to land some significant shots for the first time as he pins Krause against the fence. Once again, Krause wiggles free and he turns the position on Taylor, who is now stuck on the bottom against the cage. Krause backs out to get to his feet and it allows Taylor to dive forward for another takedown before the end of the round.

ROUND 2
Taylor wastes no time grabbing another takedown to put Krause on the mat, and this time he's able to maintain control while pressing the action against the cage. Taylor continues to pepper away while Krause plays defense from the bottom. Taylor is just smothering Krause while landing a few short punches and hammer fists. Finally, Krause is able to get his hips under him before getting free from the position while trying to take the back. Before Krause can get his hooks secured, Taylor once again turns into the position and gets back on top again. Taylor continues with a punishing performance through the end of the round, leaving Krause in dire straits going into the third round.

ROUND 3
Taylor blasts forward with another takedown to start the final round. Taylor is fighting at a grueling pace as Krause struggles to get out from under him. It's very much a carbon copy from the last round as Taylor just wears on Krause with short punches and inside elbows over and over again. Finally, Krause attempts to slip out, but while kicking his legs away he inadvertently leaves his head up, which allows Taylor to grab on to a guillotine choke. Taylor snatches the neck before moving into full mount as Krause attempts to wiggle free. A second later, Krause is no longer fighting back and it's clear that Taylor put him to sleep. The fight ends with Jesse Taylor winning by third-round submission due to a guillotine choke. 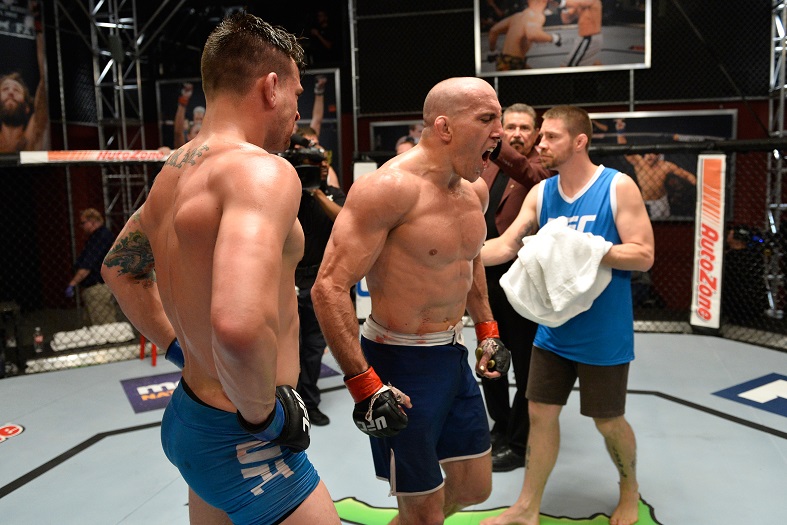 "I finally finished the job. It's been nine years in the making," Taylor said. "I feel exuberant. One more fight and it completes the ultimate redemption story."

With the win, Taylor moves back into the finals while also celebrating the rarest feat of all during his run this season. Taylor is now 7-0 in the fights taking place during The Ultimate Fighter over the course of his two seasons on the show. More importantly, Taylor was able to put the bad memories behind him from his first appearance on the show as he gets ready for the finals.

On July 7 in Las Vegas, Taylor will meet Dhiego Lima in a fight that will determine the winner of The Ultimate Fighter: Redemption. Don't miss a second of the action with The Ultimate Fighter Finale, as well as a lightweight main event pitting Michael Johnson against highly touted Justin Gaethje, who makes his UFC debut on the card.