The first finalist has been crowned on The Ultimate Fighter: Redemption, but questions still remain about whether or not the other semifinal matchup will still move ahead as scheduled.

Before Dhiego Lima stepped into the Octagon to battle it out with teammate Tom Gallicchio this week, James Krause became the center of attention because an eye injury he suffered during his fight with Ramsey Nijem put him in jeopardy of not being able to continue in the competition.

Krause suffered a scratched cornea, which probably wouldn't take too long to heal, but with time ticking down until his fight with Jesse Taylor, just about everybody was concerned whether or not he'd be able to participate in the semifinals. With uncertainty swirling, UFC President Dana White called a private meeting with Cody Garbrandt to instruct his team to stay ready, as he would choose the replacement if Krause was unable to fight next week.

Garbrandt celebrated the news with his team because Krause's misfortune could mean one of them could get another chance in the tournament. Meanwhile, over on TJ Dillashaw's side, his entire squad was dejected after hearing the news that Garbrandt would pick the replacement if Krause couldn't fight next week. Nijem was particularly upset, considering he just went three hard rounds with Krause, and if anybody should have been picked to re-enter the tournament, he believes it should be him.

"If I don’t get that [expletive] spot, I'm going to make some noise," Nijem said.

Nijem's complaints eventually got on Gilbert Smith's nerves and they ended up in a heated confrontation in the hallway after training was finished. The two fighters came nose-to-nose, with each of them seemingly just one move away from possibly throwing a punch before cooler heads eventually prevailed.

Tempers also flared back at the house as Krause faced a ton of questions from his fellow housemates about whether or not he'd be able to continue in the competition. Krause was still awaiting his doctor's appointment to get his eye injury checked out but, in the meantime, everybody seems a little too curious about the state of his ability to fight next week. Some of the concern was certainly genuine, but Krause felt like more than a few fighters were rooting for his downfall so it might open up an opportunity for them to get back into the semifinals.

The situation finally boiled over, with Krause exchanging words with Johnny Nunez in the middle of the house, although thankfully nothing turned physical between the two fighters.

Elsewhere this week, Dillashaw exacted some revenge on Garbrandt after he played a prank on him earlier in the season, and it looked like the former champion got the better of these exchanges. First, Dillashaw decided since there were no Team Garbrandt fighters left in the competition that he would redecorate the opposing locker room. Along with some help from his fighters, Dillashaw repainted the entire room to match his locker room while putting up his pictures all over the walls to replace the ones featuring Garbrandt.

When Team Garbrandt showed up for practice, even Seth Baczynski had to admit that it was a pretty clever prank to play. From there, Dillashaw ratcheted things up by then bringing in a nest of snakes, which he left sitting in the Team Garbrandt locker room. All season long, Garbrandt has been poking at Dillashaw by calling him a snake, which was a nickname given to him by Conor McGregor back on season 22. Dillashaw decided to embrace it by not only making team t-shirts featuring snakes, but then he dropped off a slew of them in Garbrandt's locker room and it's safe to say no one saw that coming.

Once the pranks had been played, it was time to turn the attention to the fight that would determine the first finalist moving on to the live finale on July 7 in Las Vegas.

ROUND 1
It was a slow start to the fight, as Lima and Gallicchio had a feeling out process early before starting to exchange some strikes. Lima begins to land some solid kicks, including a hard shot to the body before Gallicchio finally dives forward looking for a takedown. Unfortunately, Gallicchio didn't set up the shot and Lima easily moved out of the way. Lima did a good job avoiding Gallicchio's takedown attempts throughout the opening round while finally finding his range with a series of stinging, straight punches from the outside. It was a close round, but Lima definitely did more damage on the feet. 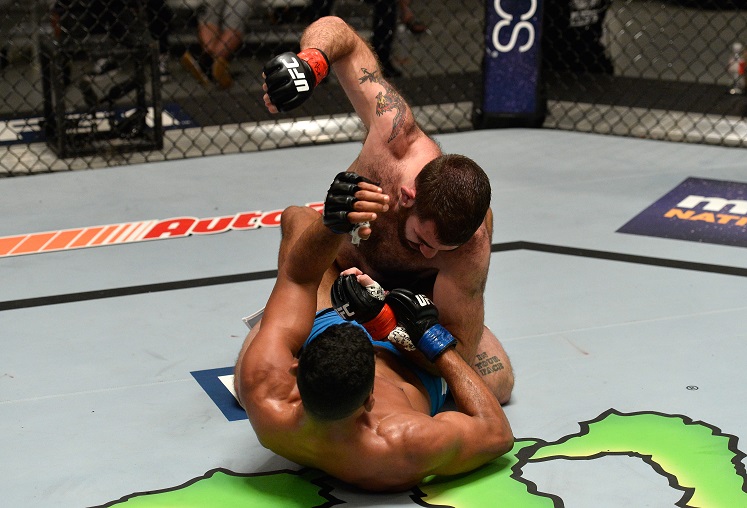 ROUND 2
Gallicchio opens the round by getting in deep on a single leg takedown, but Lima is still able to resist before landing a solid knee to the head on his escape. After trying to find his range during the opening round, Lima really seemed to start finding a home for his punches, including a nasty right hand that absolutely blasted Gallicchio in the jaw. From there, Lima really started opening up his combinations, with each set finishing with a hard, thudding kick to the leg. Lima seemed like he was going for the finish when Gallicchio was able to get deep on a takedown against the cage. Lima stopped the takedown by grabbing the fence, which forced referee Herb Dean to pause the action before taking a point away. Once the fight is restarted, Lima remains in control with another hard series of punches while Gallicchio clearly looks rattled by the time the horn sounds.

ROUND 3
Because he lost a point in the second round, Lima couldn't take any chances to give up the third, and he set the pace early by stopping Gallicchio's takedowns and again delivering several hard punches on the escapes. Gallicchio was desperate to put together any kind of offense when he finally landed a takedown before advancing his position on the ground. It looked like just the opening Gallicchio had needed, but his conditioning was waning and that allowed Lima to stay safe until he was able to work off the ground and back to the feet. From there, Lima stayed in control with his technical kickboxing game while Gallicchio was out of gas. Lima closed the fight with a takedown of his own and a few more hard shots landed on the mat, but it was clear he had done more than enough to get the win. 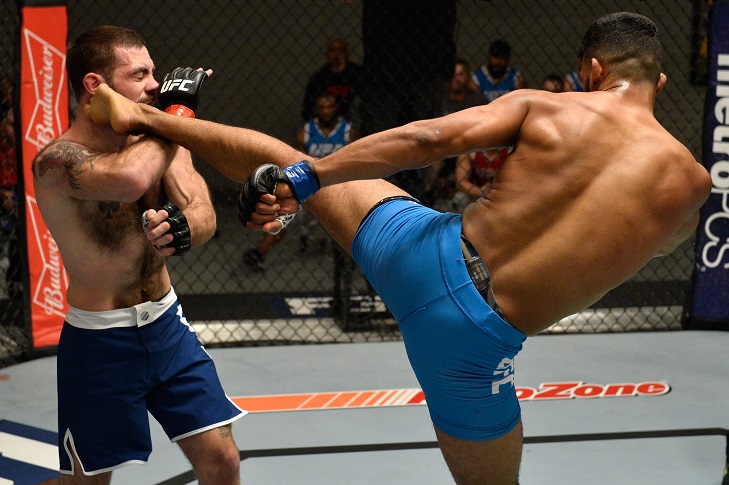 Dhiego Lima def. Tom Gallicchio by unanimous decision and he's moving on to the finals.

With Lima now set as one finalist, the other side of the bracket will be filled next week, but will Krause be able to continue in the competition or will Team Garbrandt get one final chance to put somebody into the fight with Jesse Taylor? It all goes down next week in The Ultimate Fighter: Redemption season finale.