It's only the first episode of The Ultimate Fighter: Redemption, and one fighter has already been eliminated, another went home after not being able to make weight, and coaches Cody Garbrandt and TJ Dillashaw got into a physical altercation that nearly erupted into a full-blown brawl.

It's safe to say the new season is off to an explosive start.

Before things turned volatile, the 14 fighters arrived on the show, with all of them looking for redemption after competing on a past season, as well as attempting to make a second run at the UFC. For some fighters like Joe Stevenson or Gilbert Smith, this season marks a potential last opportunity for one more run in the big show. For others like James Krause, this season affords them a chance to have a better outing on The Ultimate Fighter while also looking to cash in on the $250,000 grand prize for the winner of the competition.

As the season got underway, UFC President Dana White wasted no time announcing that he would be paying the fighters $10,000 each for a win, which then prompted Ramsey Nijem to ask about a bonus for finishes. The on-the-spot negotiations worked, because White then agreed to pay the fighters an additional $5,000 for every finish that takes place this season.

With the financial arrangement in place, it was then time for the coaches to put the fighters through a rigorous workout to find out who was going to be the best fit for their teams. Bantamweight champ Cody Garbrandt went one step further and actually interviewed all the fighters to get a better sense of their mentality and focus before making his team selections.

When it finally came time to make picks, Dillashaw won the coin toss, which allowed him to make the first selection while Garbrandt would get to make the first fight pick. The rules this season are different than many in the past because fight picks will alternate each week, regardless of which team is victorious in the previous bout. Also, this season will re-introduce the wild card format, where two losing fighters will be given a second chance to return and compete for a spot in the next round of the tournament. With that settled, here's how the team selections were made: 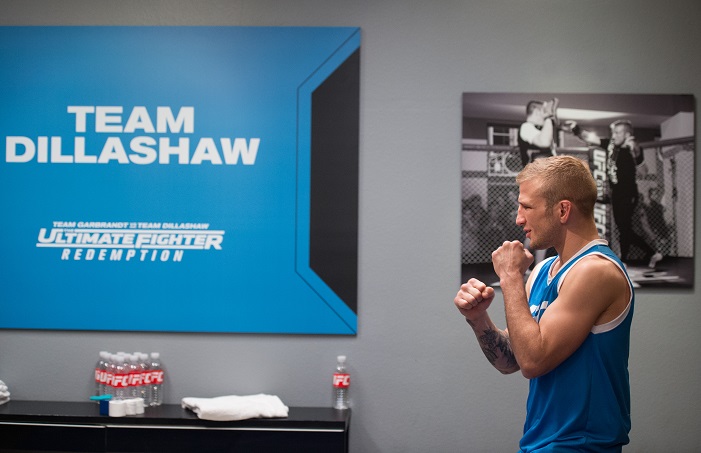 Immediately after team picks were made, Garbrandt made his first fight selection, pitting his No. 1 pick Seth Baczynski against Team Dillashaw's last selection, Gilbert Smith. In return, Dillashaw selected Hector Urbina from Garbrandt's team to take on his top pick, James Krause, and the first two fights of the season were made.

Once the fights were made, it was time for the competitors to move back into the house and start getting ready for battle, since the first bouts were only a few days away.

Immediately after the fight selection, Urbina started to express concerns about his weight because he came in more than 20 pounds over the welterweight limit and that's undoubtedly why Dillashaw picked him as the first opponent for his No. 1 pick, James Krause. While Krause wanted to get the first fight of the season so he could win and then get some rest before the next round of the tournament began, picking Urbina was a logical move considering how heavy he was coming on the show, which meant he was going to have get down in weight in a hurry.

Unfortunately, despite his best efforts, Urbina was unable to cut the weight, and as fight day was quickly approaching, he had to make the call to say he was not going to be able to continue in the competition. Urbina isn't the first fighter to leave the show over weight issues, but this is a particularly heartbreaking turn of events considering how everybody this season was looking for a second chance and now his is finished.

With Urbina gone, Garbrandt selected Johnny Nunez, who competed on season 22, as his replacement, and he is now set to face Krause in the opening round. Due to the change of opponent, Krause was given some additional time to prepare, while Nunez got acclimated to the show after getting off to a late start.

Urbina's exit left Baczynski and Smith as the featured bout on the debut episode, and these two veterans could barely wait until they got into the Octagon together to settle the score. Smith was ranting about how he was being underrated in the competition and he planned to take that out on Baczynski, while not realizing that his opponent was sitting a room away. That caused Baczynski to erupt, and the altercation nearly got physical, with several confrontations until they finally faced off after the weigh-ins.

Speaking of the weigh-ins, this also brought about an incident between the coaches when Garbrandt went after Dillashaw as the two of them started jabbing at each other about the altercation between Smith and Baczynski. While standing just a matter of inches apart, Garbrandt ended up grabbing Dillashaw by the throat, and other fighters and coaches quickly intervened before the situation could get any worse.

"An eagle latched up a snake," Garbrandt said about the situation.

Meanwhile, Dillashaw believes that Garbrandt was forced to get physical because he couldn't respond intelligently by using only his words.

"Cody's not very smart and he doesn't have anything he can say that's witty," Dillashaw fired back.

Cooler heads didn't exactly prevail, but Garbrandt and Dillashaw were pulled apart long enough for the focus to return to the fights, as Baczynski stepped into the Octagon to meet Smith in the opening round matchup.

ROUND 1
Knowing that Smith would eventually look for the takedown, Baczynski tried to implement his striking game early and 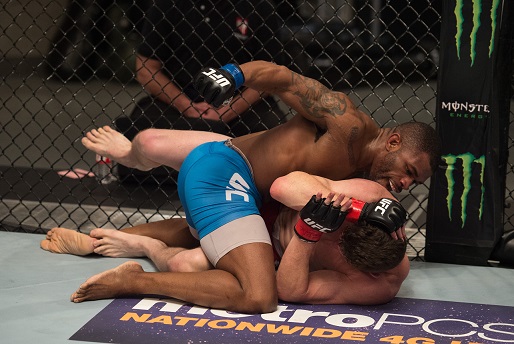 often as the first round got underway. Baczynski did manage to land a hard, stinging left hook that clipped Smith on the jaw, but that only sped up his game plan to drag this fight to the mat. Smith was tenacious with his takedowns as he took Baczynksi down a couple of times, the second of which was a body lock that resulted in him nearly taking his opponent's back. Smith finished the round looking for a rear naked choke, but Baczynski did a good job of avoiding the submission.

ROUND 2
Smith wasted no time taking Baczynski back down to the ground as the second round got underway, and it was clear that his control on top was going to be a big problem for Team Garbrandt's first pick. Baczysnki did manage to get a guillotine choke that looked deep for a moment, but Smith wiggled free and spent the majority of the round on top, raining down punches while in complete control of the action.

When it was over, there was no doubt that Smith had done more than enough to win, as Team Dillashaw gets on the board while Team Garbrandt loses its No. 1 selection. 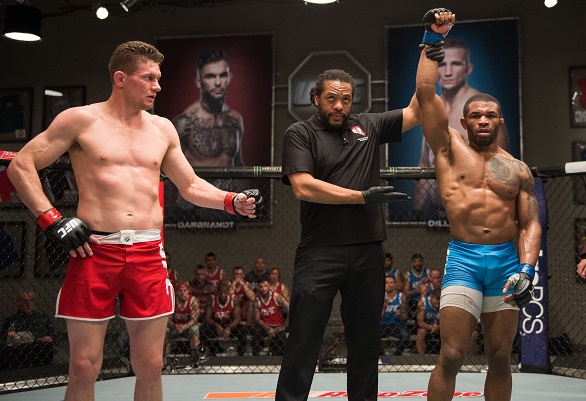 While Dillashaw's team was victorious, the fight selection went back to Garbrandt due to the alternating picks, and he opted for TUF 19 winner Eddie Gordon to take on Tom Gallicchio in the next bout of the season.

Don't miss a minute of the action when Gallicchio tries to pull a second straight upset for Team Dillashaw when he faces off with Team Garbrandt's Eddie Gordon next Wednesday night at 10 pm ET on FS1.