Read on to find out which fighter secured the last spot in the Ultimate Fighter Latin America Finale! 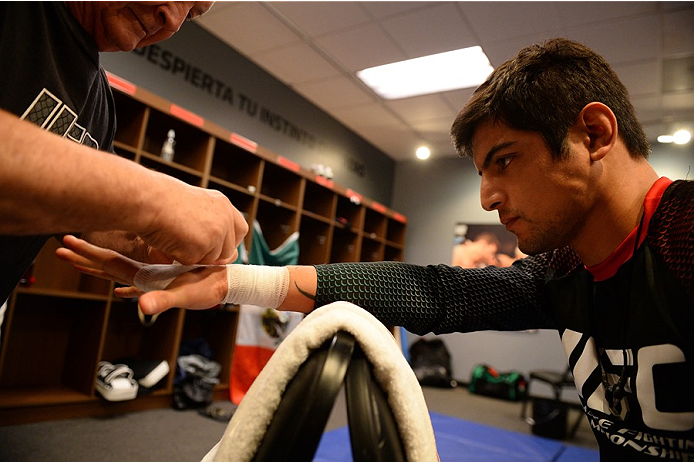 It’s the final episode of the season and one fight remains as Team Latin America’s last hope Leonardo “Chimy” Morales squares off against Team Mexico’s Gabriel “Moggly” Benitez. Coach Werdum calls Leo a “surprise,” and thinks the Nicaraguan’s impressive Muay Thai will lead him to the finals. Leo’s gameplan for the fight will be to use his range. He wants to attack with a lot of straight punches and finish his combinations with hard kicks. He also has to stay very active on his feet to avoid the takedown.
As Leo prepares for the biggest fight of his life, Marlon Vera receives some of the best news of his. Dana White calls Marlon into the office and tells him that he has “good news and bad news.” The bad news is that Marlon will not be able to go home on time. The reasons for this is that the UFC is flying out Marlon’s wife and daughter to Las Vegas. It’s not a simple vacation, though. The family will see a pediatric specialist and look into surgery that will cure her Moebius Syndrome.

Back at the TUF house, we learn more about Gabriel Benitez. In order to avoid a destructive environment of violence and drugs, Gabriel left home at the age of 14 and has been on his own ever since. He wound up devoting all his time to MMA and know finds himself on the cusp of a UFC contract. We see him drilling with Daniel Cormier. They’re working on backing Leo against the fence to neutralize the reach advantage. Once they have Leo backed up, he’ll be looking for the takedown. After he wears his opponent out on the ground, he’ll go for knockout on the feet. We cut back to the house, where they’re having a barbecue to celebrate their final night. Everyone behaves themselves (no tequila flowing) and then it’s fight time!
ROUND ONE
Gabriel comes out aggressive and pushes Leo to the fence just how he practiced. The two clinch up and trade knees. Gabriel reaches for a guillotine, but quickly loses it. The two continue to fight for position and Leo 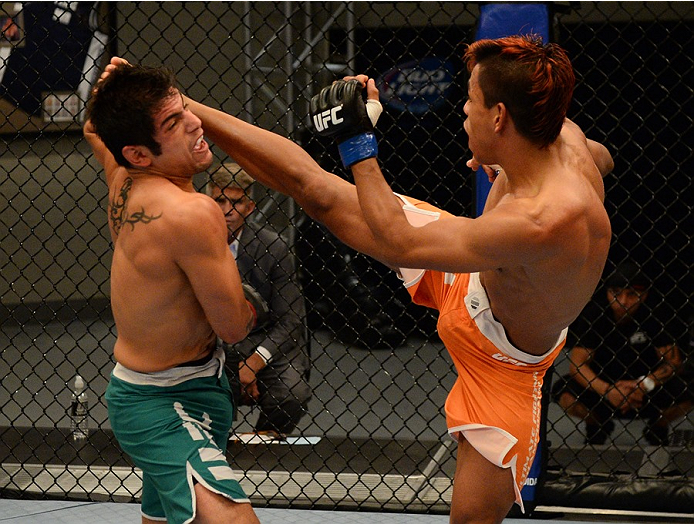 knees below the belt. They restart and Garbriel charges forward again. They clinch and Leo commits another foul. After the second restart, Gabriel continues with the same strategy. Leo starts to time him this time and connects with a few punches. Gabriel repeatedly forces the clinch, but fails to capitalize or advance position. The ref breaks them up, Leo lands a few punches and Gabriel initiates the clinch. This pattern repeats until the round ends.
ROUND TWO
Gabriel low kicks and Leo answers with a cross. Gabriel rushes forward, but eats another kick for his troubles. The strikes don’t deter him, though, and the two are back clinching against the fence. Leo reverses position, breaks the clinch and throws a flurry of punches. Gabriel absorbs them and charges right back with a few of his own. The two move to the center of the Octagon and Leo starts to find the mark with his straight punches. Gabriel walks right through them and slows the pace by clinching up again. The ref breaks them apart and Leo goes right back to work. He stands right in front of his opponent and lets Gabriel counter with a stiff left hand. Leo returns fire with a couple jabs, but he can’t stop Gabriel from advancing. Gabriel clinches, works some dirty boxing and the 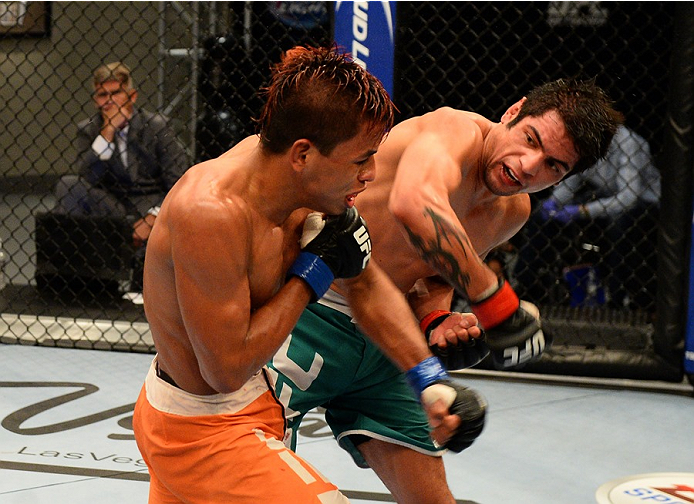 round ends.
ROUND THREE
Gabriel sticks to his strategy and moves forward. Leo finally remembers his footwork drill and circles away to avoid getting pinned against the cage. Now that he finally has some space to work, the Nicaraguan lets his hands loose and throws more kicks. He gets a little too loose, however, and Gabriel shoots in for a takedown. Leo recovers and the two tie up in the Thai clinch. The ref separates them with three minutes remaining. Leo works his boxing and Gabriel counters right back. They clinch and the ref separates them again. Two minutes are left in the round and Leo starts to come on strong. Gabriel appears to be the one that’s fatigued and Leo has an easier time controlling the distance. He kicks, avoids the takedown and finds a home for his left hand. Gabriel pushes through the strikes, but doesn’t generate any offense as the round ends.
The judges’ scorecards come back and they read: 29-28, 30-27 and 29-28 all for Leonardo Morales. No one seems to disagree with the decision and Dana White even has something positive to say about a referee. Gabriel feels that he did enough to win, but his face reveals that he’s not surprised by the decision.
We close out with a preview of this weekend’s finale live from Mexico City. Who will win the battle of strikers between Yair Rodriguez and Leonardo Morales? Can Alejandro Perez finally beat Jose Quinonez? Does Fabricio Werdum become the interim heavyweight champion? Find out this and more Saturday at UFC 180!