The back and forth war between Team Liddell and Team Griffin continued this week on The Ultimate Fighter Latin America, with a pair of fights once again split on the latest episode.

As things got started this week, the fallout continued after Miguel Villegas got a little too aggressive in his face off with Team Liddell fighter Ilianovich Chalo after their fight was announced. Villegas charged forward and ended up butting heads with his opponent, which led to some pushing and shoving, with even the coaches forced to get involved to separate the two angry competitors. Following the altercation, Chalo was clearly angry by Villegas' decision to turn their faceoff physical, but he promised to get his revenge once they stepped into the cage together.

As for Villegas, he didn't show much remorse for his decision to turn a customary staredown into a near brawl. Villegas also showed a ton of confidence coming into the fight, despite giving up some size and experience to his opponent from Team Liddell. For Villegas, this bout signified the start of his mixed martial arts career as he looked to make the UFC roster at just 21 years of age. For Chalo, the fight gave him the same opportunity but it also allowed him to honor his brother Boris, who died six years ago in a tragic motorcycle accident.

Chalo dedicated his performance to his brother, who he remembers with an honorary tattoo that he got after Boris passed away. 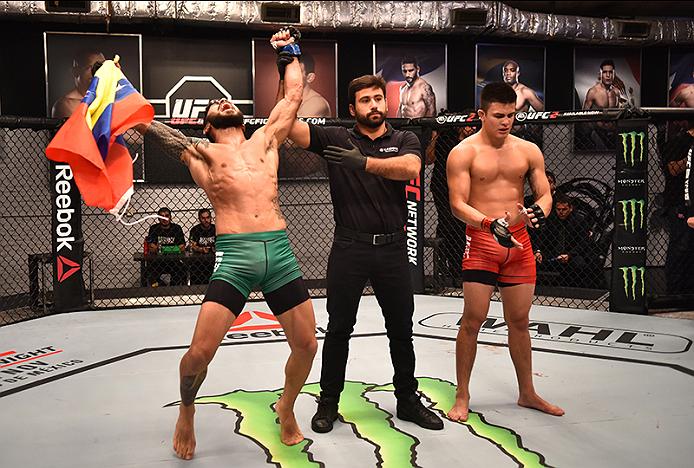 Heading into the fight, the two coaches had a set game plan for each competitor, with Chalo being the better striker and Villegas having a better chance to win on the ground. Following an initial exchange, Chalo slipped while going after Villegas, which gave the young Mexican fighter the chance to take the fight to the ground. The advantage only lasted for a few seconds, as Chalo scrambled to get back to his feet against the cage while Villegas attempted to hold on to the position while looking to take the back.

Despite his best efforts, Villegas came up short with his second takedown attempt and Chalo was able to escape before resetting in the center of the Octagon. From there it was all Chalo, as he pressed forward with an aggressive series of punches, and instead of looking for the clinch or attempting another takedown, Villegas was drawn into a firefight and he got burned. Chalo finally uncorked a huge left hook that crashed into Villegas' jaw and he face planted on the mat, which forced the referee to run in and stop the action before things got any uglier. Villegas fell and then stumbled back to the cage in a daze, so clearly he was quite rattled and it was a good stoppage. Chalo moves on to the next round as Team Liddell gets another win.

Immediately after the fight, the next bout was selected by coach Forrest Griffin, as he picked Marcelo Rojo from his team to take on Juan Villeseca from Team Liddell.

The two fighters facing off in the second bout of the episode came from very different backgrounds and journeys to make it to the show. Rojo was raised by his mother and his grandmother and he talked about the hardest moment in his entire life, which was coming to terms with the fact that his father didn't want him after he was born. That was an incredibly tough pill to swallow, but Rojo soldiered forward in life and luckily had an incredible mother and grandmother around to support him. Even when he made the decision to move to the United States for seven months to train in an attempt to chase his dream to make MMA a profession, they supported him.

As for Villeseca, he was raised with a full family around him, including three brothers who grew up with him. Villeseca explained that his father was martial arts enthusiast and got him involved at just four years of age. Since then, fighting has remained a family affair because Villeseca explained that his brother is actually his coach and one of his main sparring partners while getting ready for fights. 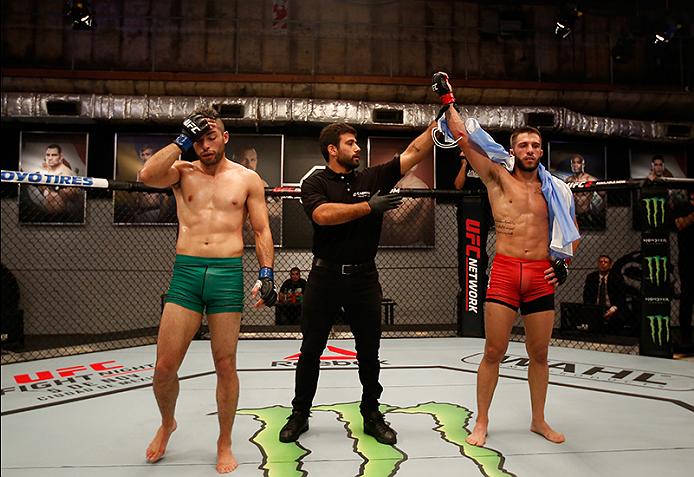 From the moment this fight started, Villeseca tried to go after Rojo with everything he had in his arsenal, as the two got into a few wild exchanges in just a few seconds’ time. An accidental knee to the groin paused the action early as Rojo was hurt, but after a few moments he was able to continue. From there, Villeseca once again engaged in a wild exchange, but Rojo countered with a body lock takedown to put the fight on the mat.

From there, it was all Rojo, as he quickly moved from half guard into the mount as he took complete control of the fight. Rojo transitioned once again while Villeseca attempted to escape, but he ended up with the Team Liddell fighter latched on to his back, looking for the rear naked choke. Rojo wasted no time locking up the submission and Villeseca had no choice but to tap out and signify the end of the contest. Marcelo Rojo now moves on to the next round of the tournament while giving Team Griffin another win.

Following the conclusion of the fight, the next matchup was announced, as Leonardo Rodriguez from Team Liddell will take on Yasser Castillo from Team Griffin.

The fight announcement wasn't the end of the episode, however, because soon after, coach Chuck Liddell informed his team that he was leaving the show to return home to the United States and would keep an eye on them through video, with the other coaches staying behind. It was a bombshell for the team, who really took to Liddell's training methods, but it seems the former light heavyweight champion was forced to return home.

Will Liddell's exit signify a shift in the tournament after the fighters have gone back and forth between wins all season long? Tune in to the next episode of The Ultimate Fighter Latin America next Wednesday on UFC FIGHT PASS to find out.