The latest episode of The Ultimate Fighter Latin America not only showcased the fight first teased on last week's offering, but a second bout was added as the competition between Team Liddell and Team Griffin continued to heat up.

While Griffin's fight pick from a week ago didn't necessarily pit his top fighter against Liddell's weakest link, it's clear the former light heavyweight champion and UFC Hall of Famer wants to take out the lowest rated fighters from his opponent's team to ensure his guys have an easier path to the second round.

Flores was certainly confident heading into the matchup, regardless of his standing in the team selections, but Puelles just wasn't convinced that the Team Griffin fighter was really there to win as much as he was there to put on a show.

"I think he likes partying, women, he doesn't crave this as much as I do. I want this, I want to win," Puelles said about Flores before the fight began.

In the final hours before Puelles and Flores faced off, Octagon Girl Jhenny Andrade made an unexpected stop by the house to visit with the fighters and give them a much-needed break after several days of seclusion after the show first started. Andrade came by to make food and drinks for the guys as she got to know some of them and Flores paid special attention to the Octagon Girl, even showing her a few of his dance moves before the evening was over.

It's a good thing Flores got to move his feet with Andrade because he didn't get to do much of anything in his fight with Puelles, who dominated this bout from start to finish.

As soon as the two fighters engaged in the Octagon, Puelles was shooting for a takedown to put Flores down on the mat and into his world of ground and pound and Brazilian jiu-jitsu. To his credit, Flores did a good job to continuously work his way back up to the feet, but each time he managed to do so, Puelles immediately planted him back down on the ground. Puelles continued to pour on the punishment with elbows and punches from the top while Flores could only play defense and hope to survive. Flores did manage to get back up one final time, but Puelles wasted no time taking him down again, and this time there was no getting up. Puelles quickly transitioned to the mount before taking Flores' back, and rather than looking for the choke, he just flattened out his opponent and started blasting away with shots until the referee had no other choice than to stop the bout.

Puelles punches his ticket into the quarterfinals with an incredibly impressive performance to dispatch Flores via first round TKO.

"Claudio was our first pick. We think he's got a great shot of winning this thing," Liddell said. 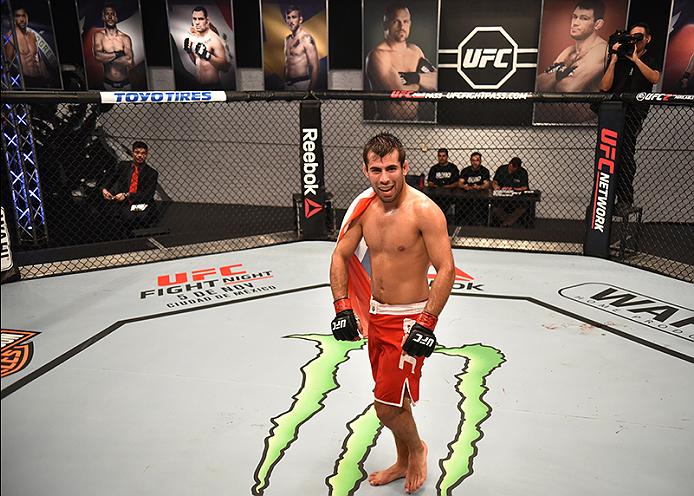 With Liddell's fighter victorious, Griffin was up to make the next fight selection and he went with Walter Zamora against John Bedoya. According to Griffin, this was the fight that Zamora requested and he's going to allow his fighters to pick the matchups they want when it comes time for them to compete and this is exactly what his athlete asked for.

There's no wasting time after the matchup is made, as Zamora and Bedoya are standing across from each other in the Octagon, ready to battle it out for a slot in the next round of the tournament.

In the early going, Bedoya looked confident on his feet as he cracked away at Zamora with some solid leg kicks, but it was clear after a few exchanges that both fighters were being rather timid when it came to trading strikes on the feet. Bedoya had a reach advantage, but he just kept coming up short with his punches and Zamora wasn't on target much better when he tried to put together combinations.

Finally, with about two minutes to go in the first round, Zamora found an opening to plant Bedoya on the ground with a big takedown and he secured the position until the horn sounded, which likely gave him the nod on the judges' scorecards. The second round saw much of the same from Zamora, as he was able to take Bedoya down to the ground and nearly take his back in the early going.

To his credit, Bedoya did manage to work back to his feet and it looked like he might land a standing guillotine choke, but he couldn't secure the hold and Zamora slipped free. From there, it was all Zamora looking for the takedown while Bedoya could only attempt to defend. Even in the closing moments, as the coaches were both screaming to get their fighter's attention, Zamora was looking to get the fight to the ground while Bedoya was going for an ill-fated kimura attempt that failed just as the horn sounded to signify the end.

After two rounds, Zamora was declared the winner by decision as he marks the second win for Team Griffin in the competition.

With Zamora's victory, the next fight was left to Liddell, who decided to go with Ilianovich Chalo against Miguel Villegas. As soon as the fighters were announced, Villegas came charging forward and put his head directly against Chalo's and it didn't take long for the simmering staredown to explode. Pushing and shoving ensued, and it forced Griffin to step in between them and Liddell actually ended up shoving Villegas out of the way as he continued to go after Chalo following the face off.

Liddell was clearly not happy with Villegas' actions while Chalo simply laughed off the poor attempt to intimidate him before the fight began. Either way, these two are going to throw down in the next matchup as The Ultimate Fighter Latin America gets halfway through the opening round on the next episode, which debuts every Wednesday on UFC FIGHT PASS.