The quarterfinals for the latest season of The Ultimate Fighter Latin America are now set, but not before the best fight of the season thus far took place in the final opening round matchup, while an injury changed the course for one competitor.

The final opening round bout took place on the new episode, as Alejandro Martinez from Team Griffin earned a hard fought decision over Fabian Quintanar from Team Liddell. The two rivals from Mexico were actually close to fighting on two previous occasions, but Quintanar didn't accept the bouts, and that didn't sit well with Martinez. He finally got the chance to prove he was a worthy opponent once they stepped inside the Octagon together.

And though Quintanar was very confident going into the fight, Martinez was definitely focused on getting the win and showcasing his skills in the Octagon.

ROUND 1: Despite his early prediction that Martinez would force the clinch and close the distance, it was actually Quintanar who constantly pressed forward and started working to push his opponent against the cage. Martinez did a good job to circle away and get off the cage while the two fighters engaged in a few sloppy exchanges on the feet. It was clear that Quintanar had the reach advantage while Martinez seemed faster and a bit more powerful on the feet. Martinez was able to grab one of Quintanar's early kicks and plant him on the mat with a nice takedown, but there wasn't a ton of action after that exchange. Martinez did manage to open a small cut on Quintanar's head, which started bleeding more and more as time ticked away. It was a very close fight after the first five minutes.

ROUND 2: As round two got started, Quintanar landed a very nice takedown to put Martinez on the mat, but unfortunately he couldn't hold him there for very long before they were back on the feet. While his striking was a little off in round one, Quintanar upped his volume in round two and started to land with better combinations and accuracy. Quintanar also cracked Martinez with a hard uppercut that snapped his head back with about a minute to go in the round. There was also a foul during this round after Martinez clipped Quintanar with a knee strike while he was grounded. The referee paused the fight to allow Quintanar to recover, but he definitely got dazed from the knee.

ROUND 3: Quintanar opens the round with a big overhand right that immediately drops Martinez on the ground. The Team Liddell fighter follows up with a swarm of strikes, trying to get the finish, but Martinez recovered quickly and grabbed on to the clinch to avoid any more damage. During a scramble near the cage, Martinez once again fired an ill-advised knee strike that caught Quintanar while he was still on the ground and the referee was forced to intervene once again. Upon the restart, Martinez took advantage and started opening up with a huge combination that appeared to stagger Quintanar as he was looking for the finish. Quintanar survived through the end of the round but not before Martinez planted him on the ground with another big takedown. 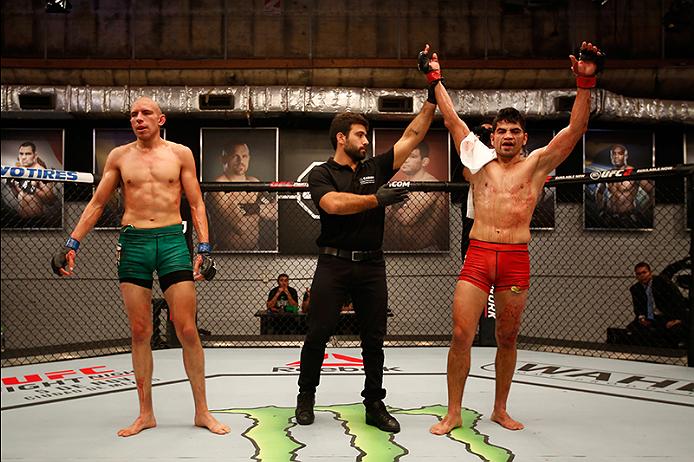 When the fight was over, Martinez was handed the victory by decision, although Liddell felt like the Team Griffin fighter should have been penalized for the two illegal knee strikes landed in rounds two and three.

"He didn't get a point taken, that's ridiculous," Liddell said

Martinez was excited to get the victory, but it was a short-lived celebration after the doctor began examining him after the fight. Martinez actually ended up with two huge gashes - one over each eyebrow - that forced him to have stitches to close the wounds. The cut on his right eyebrow nearly stretched across his whole eyelid as well and it was clear that this was going to be a serious problem if he moved forward in the competition. The doctor examined Martinez and determined that he would not be able to move into the quarterfinals due to the lacerations on his face.

It was a bittersweet moment for Martinez, who finally got to fight and beat Quintanar inside the cage, but thanks to the grueling, three round war, he was eliminated from the competition after the victory.

That meant a past competitor was going to have to replace Martinez in the quarterfinal round and both Liddell and Griffin had ideas about who it should be. The decision ultimately came down to UFC President Dana White, who also determined the quarterfinal matchups that were announced at the end of the episode.

The fights in the next round break down like this:

Bedoya was ultimately the choice to rejoin the competition after he lost a heartbreaking majority decision to Walter Zamora early in the opening round. Now Bedoya will return and face Marcelo Rojo in the final quarterfinal matchup on the show.

After the fights were announced, Griffin cautioned the competitors no longer involved in the tournament to stay in shape and be ready to fight because injuries happen all the time and there's always a chance one of them could re-enter the tournament down the road. Just like Martinez got knocked out after winning this week, it could certainly happen again and there could be another spot opened up for one of the eliminated fighters to return to the competition.

With the quarterfinals about to get underway, next week's episode will feature two fights, as Pablo Sabori faces off with Claudio Puelles while Walter Zamora takes on Leonardo Rodriguez. Don't miss a minute of the action as the next round of The Ultimate Fighter Latin America gets underway.