It's been a long road to get to the semifinals, but the last four fighters are now poised to face off, with two of them moving on to the finale on November 5 in Mexico City. This week's episode saw the last quarterfinal match unfold, as Marcelo Rojo from Team Griffin took on John Bedoya from Team Liddell.

Bedoya was drawn back into the competition after Alejandro Martinez was forced out of the tournament due to the cuts he suffered in his win over Fabian Quintanar in the opening round. Bedoya originally lost his fight to advance in the tournament, but when Martinez was unable to continue, he was given a second chance.

While Bedoya is the fighter who was chosen to face Rojo in the quarterfinals, most of Rojo’s training partners from Team Griffin didn't agree with the decision to give Bedoya the second chance. Most of them believed the nod should have gone to Yasser Castillo, who lost a very close majority decision in his fight as well. The consensus ahead of the rematch is that Bedoya isn't on Rojo's level and they believe that the Team Griffin fighter should have no problem exerting his will and getting the job done to move on to the semifinals. 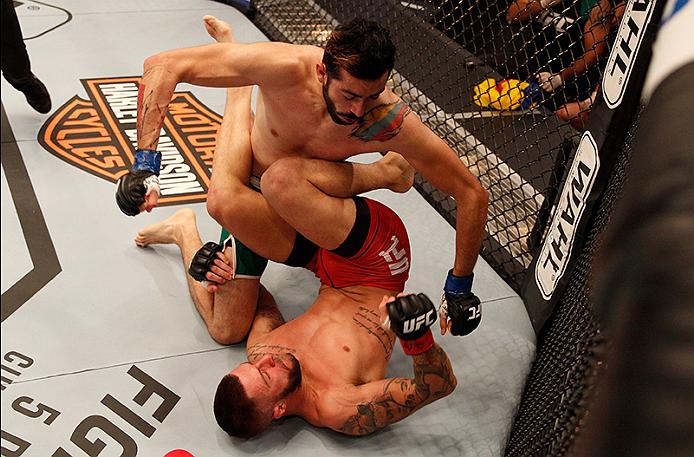 The Ultimate Fighter LATAM--Marcelo Rojo vs. John Bedoya in the semifinals." align="right" />
Meanwhile, during Team Liddell's training session, Bedoya is taking this second chance very seriously as he prepares for the showdown with Rojo. Bedoya is still very raw in his overall MMA skill set, but the coaches believe they can take advantage of his physical tools and craft him into a weapon ready for battle against Rojo. Bedoya said during the episode that even after he was eliminated, he never stopped training like he had another fight coming up because there was always a chance someone could get injured or would be unable to continue, and he wanted to stay ready.

That may have played a part in why Bedoya was picked to step back into the tournament, because he never lost the will to train and prepare even though he was already eliminated in the second fight of the season. While Bedoya is doing everything in his power to get ready for what lies ahead, his teammate Ilianovich Chalo actually believes that there's a bigger problem to deal with than his skill set.

Chalo expressed concerns about Bedoya's psychology going into the fight because he already suffered a loss, and a second defeat in the same tournament would be a tough pill to swallow. Chalo wonders if Bedoya has enough confidence to carry him through the fight with Rojo and get the win to move into the semifinals?

Outside of the fight this week, the rest of the competitors did enjoy some activities away from training after a professional sushi chef came to the house to teach them how to make the delicious delectable that had everybody's mouths watering. Some of the fighters even turned sushi rolling into a competition, although there was one face missing from the crowd. Claudio Puelles decided not to partake but not because he was being antisocial - the Team Liddell fighter was trying to maintain his weight ahead of the semifinals and he knew being around that much sushi would undoubtedly ruin his diet.

Food activities while some fighters are cutting weight must feel like a cruel trick.

While Puelles had to fight off the urge to drown in sushi, Rojo and Bedoya were ready for battle as they looked to move into the semifinals of the lightweight tournament this season

As soon as the fight got underway, Bedoya rushed forward with a series of strikes while looking to use his considerable reach advantage, but the aggression backfired and he was quickly countered with a takedown from Rojo. On the mat, Bedoya did a good job fighting off his back while looking for an omoplata counter and keeping Rojo from landing anything significant on the top. Still, Rojo spent a good chunk of the round on top while peppering away at Bedoya with short punches from inside the guard.

After the fighters were stood back up, Bedoya countered with a takedown of his own before getting locked down in Rojo's rubber guard. Bedoya couldn't mount a ton of offense but he did finish the round on top.

The second round saw Rojo breathing heavy as he immediately went after Bedoya to look for the takedown. This time, Bedoya reversed the takedown attempt and he put Rojo on the mat as he started looking for punches and elbows from the top. Coach Forrest Griffin constantly yelled at Rojo to stop playing with his jiu-jitsu and instead get up from the ground. Rojo eventually worked his way back to the feet, and this time he was able to plant Bedoya on the mat.

From there, Rojo maintains his top control while tagging Bedoya with some hard stinging shots as the fight came to an end. It was a back and forth battle that really came down to damage done on the ground as both fighters took advantage when they were on top.

When it was all over, Marcelo Rojo was handed the victory, much to the dismay of coach Chuck Liddell, who felt like there should have been a third round. Unfortunately, the judges disagreed and Rojo moved into the semifinals. 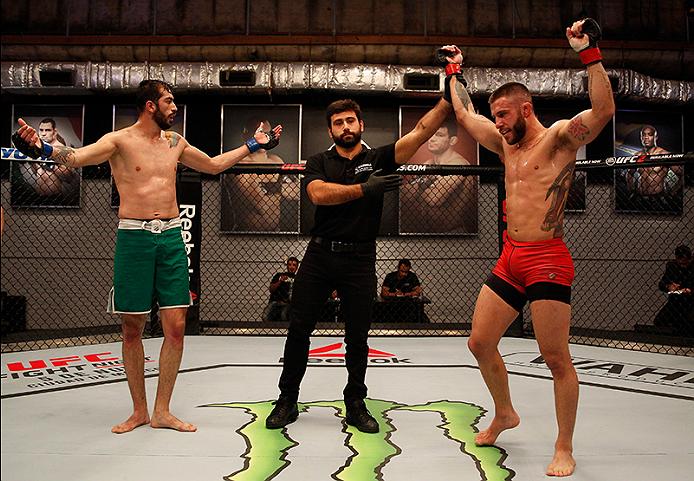 With that fight finished, it was time to announce the semifinal matchups that will ultimately determine the two competitors moving on to the finale in November.

It all comes down to these final two fights in the last two episodes, and it all kicks off next Wednesday when the new episode of The Ultimate Fighter Latin America debuts on UFC FIGHT PASS.