With only a few episodes left to go this season on The Ultimate Fighter: Latin America, the last semifinalist will be determined this week when Marcelo Rojo from Team Griffin takes on John Bedoya from Team Liddell.

So far, Team Liddell has put through two semifinalists with No. 1 pick Claudio Puelles and Leonardo Rodriguez getting wins in the first pair of fights in the quarterfinals while Martin Bravo from Team Griffin made his way to the next round after his win over Ilianovich Chalo in last week's episode. 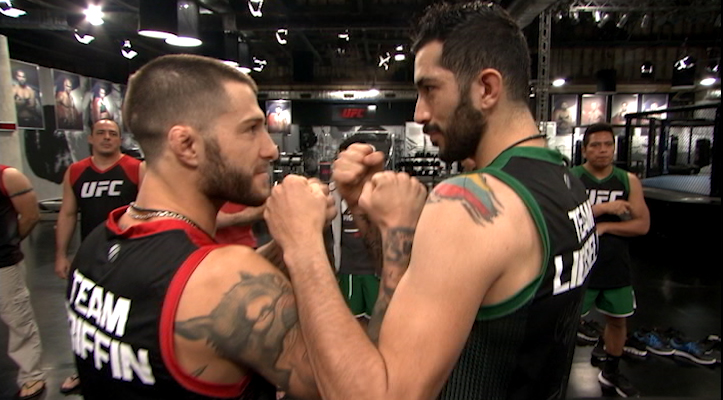 That means Rojo has to get a win over Bedoya to even up the score between Team Liddell and Team Griffin with the semifinals set to kick off on next week's episode.

Bedoya is actually back in the competition thanks to a pair of nasty cuts suffered by Alejandro Martinez during his victory over rival Fabian Quintanar a few weeks ago. Martinez actually had one of the best outings of anybody on the show after he walked into the matchup as an underdog, and then came through with flying colors to make it to the next round. Unfortunately, Martinez suffered some lacerations on his face - including one massive crater on his eyebrow line - that couldn't heal up in time for him to make it to the next round of the tournament.

So that left the coaches and UFC President Dana White with a decision to make on a replacement to step in for Martinez in the next round.

While there were several options available, the decision was eventually made that Bedoya would be the fighter to get a second chance in the tournament. Bedoya lost a majority decision in his opening round fight to Walter Zamora, who has already been eliminated in the quarterfinal round. Bedoya put up a good fight in defeat, but many of the competitors in the house felt like he wasn't the best choice to continue forward in the tournament.

As the show picks up this week, Rojo and some of his fellow fighters from Team Griffin lament about Bedoya getting a second chance while most believe Yasser Castillo should have been the person to earn another opportunity in the tournament. Castillo also lost a razor close decision in his fight with Leonardo Rodriguez, who is already in the semifinals, and he came away with minimal damage, so he could have replaced Martinez if given the opportunity.

The decision was ultimately made to go with Bedoya instead, perhaps to give Team Liddell one more fighter in the tournament, which ultimately evened up the sides going into the quarterfinal round.

Rojo is clearly confident going into his bout with Bedoya as he prepares for his matchup this week. Rojo made short work of Juan Villaseca with a first round submission in his opening round matchup, so he came away unscathed and ready for this next fight. Rojo is undoubtedly the favorite, but he certainly wouldn’t be the first fighter to be upset in this tournament.

Bedoya is a very long fighter for the lightweight division, so he'll have a reach and height advantage over Rojo going into this matchup. Bedoya is still undefeated in his professional career with a 4-0 record, but he's very much a raw prospect that still needs to be molded before he'll make any kind of real impact in the sport. Working with coaches like Hall of Famer Chuck Liddell will certainly be a huge benefit for him, and Bedoya has stayed dedicated to his craft despite being eliminated in one of the early fights during the season.

While some fighters have slowed down or stopped cutting weight after being eliminated, Bedoya stayed ready because he knew he could get another chance in this tournament, and now it's here. Of course, the last thing Bedoya wants is to get this opportunity and then face a second loss in the tournament with his fight against Rojo. Confidence could be a key factor for Bedoya considering he's still such a young prospect, and how he bounces back from the last loss could really impact his performance against Rojo this week.

Elsewhere outside of the fight, the competitors will get a little down time away from the gym this week as the UFC sends them a personal sushi chef to make food and teach them how to make the delectable dish themselves. Sushi is a favorite meal for a ton of UFC fighters so chances are the cast of The Ultimate Fighter Latin America will be no different.

Also this week, the fighters will get a chance to meet a group of young kids from Argentina who are interested in martial arts and they will get to visit the gym and work with the competitors before the quarterfinals are wrapped up. Many of the fighters on the show this season are still young and inexperienced by UFC standards but they will have a real chance to impact a group of kids - some of whom might just end up being the next generation of athletes to compete in the Octagon one day.

In the end, the episode all comes down to the fight between Rojo and Bedoya as each fighter looks to punch a ticket to the next round of the tournament with the semifinals announced after their bout is completed. Puelles, Rodriguez and Bravo will be watching closely as they find out who will be the fourth semifinalist ahead of the last pair of bouts of the season unfolding over the final two episodes.

Will Rojo give Team Griffin a second semifinalist or can Bedoya make the most of his opportunity and earn a spot in the final four?

Tune in to The Ultimate Fighter Latin America tonight, only on UFC FIGHT PASS, to see how it all unfolds.