It all came down to this.

Before the fight unfolded, Puelles had to deal with some of his old demons coming back to haunt him once again as he prepared for the final matchup with Rojo.

All season long, Puelles has been one of the most reserved fighters in the house, rarely hanging out with his teammates or even the competitors from the other side as he's stayed focused solely on the tournament. Puelles being slightly antisocial has led to a lot of the other fighters ultimately ostracizing him throughout the season because it was clear he wasn't looking to spend much time getting to know them, so they had no reason to get to know him either. 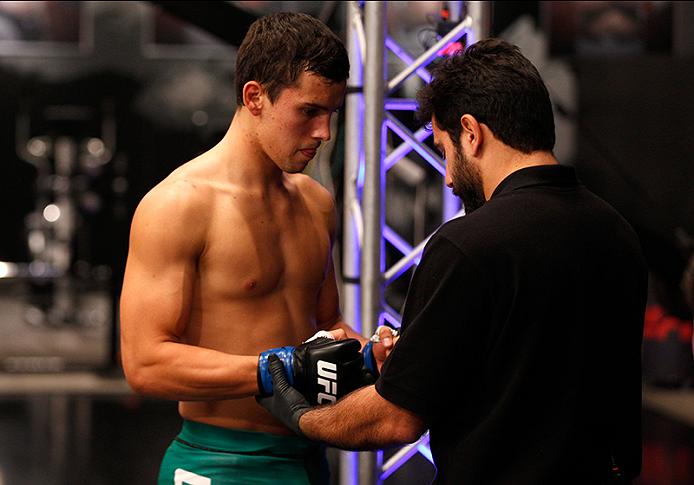 As the episode got underway this week, Puelles was once again reserved in his own room, far away from the other competitors as the days faded away until everyone was able to return home from filming. Puelles has rubbed more than a few of his fellow fighters the wrong way with his attitude, but the young Peruvian prospect has faced his own anxiety while being far away from home, where his friends and family are waiting for him.

Puelles being withdrawn from his teammates even forced the coaches from Team Liddell to tell the other fighters not to discuss this matchup with the guys from Team Griffin. Obviously, the fighters have all gotten close during the course of the season, so it's natural to banter back and forth about matchups and potential strengths or weaknesses. Thanks to Puelles rarely spending time with anybody in the house, the coaches felt compelled to make sure no one was pushing out information to the other side as Rojo looks for any advantage he could get going into the fight.

It didn't help matters much that this week saw Puelles once again stay away from his teammates during dinner after he fixed his own food and then retired upstairs, where he ate alone. Puelles also spent time reading a letter from his girlfriend in an emotional moment as he really started to feel the weight of the situation bearing down on him. All of this anxiety certainly didn't help Puelles as he got ready to make his final weight cut either.

For all the social problems Puelles has faced this season, his biggest battle may have been his own weight. Puelles was one of the true lightweights in the competition this year, which meant he had to cut down to the 155-pound limit three times over the course of six weeks. For most fighters, making weight one time after a grueling six or eight week training camp is enough, but for the competitors in the house, they have to do it far more often with a lot less time to prepare. That's why so many of the fighters on almost every season of the reality show are competing at a weight class above so the weight cut isn't as strenuous leading up to multiple bouts over the course of a six week tournament. That's exactly the case for Rojo, who isn't one of the bigger fighters in the house, but it's all paid off for him as he now prepares to compete in the semifinals. It's the exact opposite for Puelles, who had to cut a tremendous amount of weight and stay on a strict diet all season long to ensure he was able to defeat the scale before facing his opponent in the Octagon.

As difficult as the weight cut was for Puelles, he still hit the mark to make his fight with Rojo official as the last two competitors of the season prepared for a three round battle.

Heading into the fight, Puelles did manage to get a few tips from his teammate John Bedoya about Rojo's tendencies in the Octagon. Bedoya fought Rojo just a couple of weeks ago, so he advised his teammate to get the fight to the ground and look to wear out the Team Griffin fighter over three rounds. It didn't take long for Puelles to listen to Bedoya's advice as he twice picked up Rojo and put him on the mat in the opening round. To his credit, Rojo was able to wiggle free and work back to his feet on both occasions early in the fight.

Rojo decided to look for an explosive attack after getting up from the ground as he launched into a flying knee that clipped Puelles before he uncorked a spinning back elbow that also caught the Team Liddell fighter. To his credit, Puelles adjusted well and never took the full brunt of either strike, but it was a good confidence booster for Rojo. 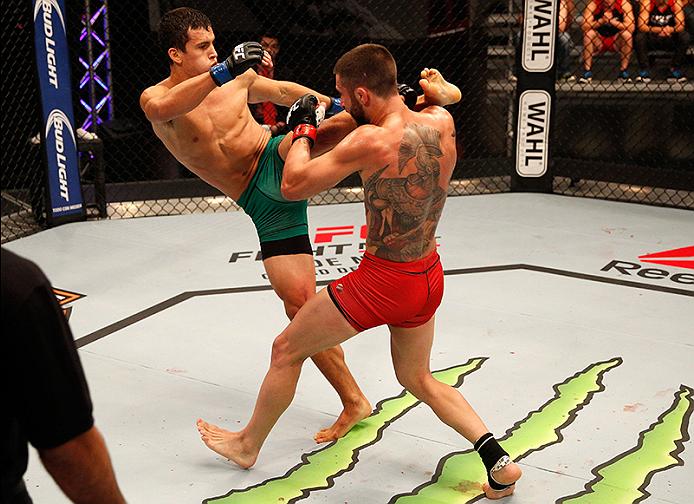 As round two got underway, Puelles decided to once again put Rojo down on the mat, but this time he wasn't going to let his opponent up quite as easy. Puelles did a good job maintaining control as he stayed patient on top of Rojo while landing some solid inside punches from the guard. Despite an active top game, the referee decided to stand the fighters up for some unknown reason, which clearly bugged Puelles, who was in control to that point in the round. Thankfully, Puelles made the adjustments on the feet and started to land with some hard shots that kept Rojo off balance. Puelles finally swooped in for another takedown before landing some more punches on the mat as the round came to a close.

It was clear that Rojo was down on the scorecards at this point and probably needed a finish, but round three just saw more of the same from Puelles.

Puelles continued to take Rojo down at will and punish him with hard strikes from the top. There was a moment when it appeared that Puelles might transition into an arm triangle choke, but Rojo did a good job of maintaining his position defensively. Sadly, staving off Puelles' versatile ground game did nothing more than help Rojo survive to the end of the round but didn't do much to win him the fight.

When it was over, Puelles was declared the victor by unanimous decision and now he meets Martin Bravo in the finals.

Puelles and Bravo were each the No. 1 pick for their coaches so it seems fitting that they will now meet in the finale this Saturday in Mexico City. Puelles will look to once again prove that he was the best fighter in the competition all along while Bravo will try to continue delivering his high intensity performances as he looks to bring another Ultimate Fighter trophy back to Mexico.