The first finalist in the women's featherweight division has been determined after a three-round battle between Pannie Kianzad and Julija Stoliarenko.

Ahead of the latest showdown between Team Gastelum and Team Whittaker, Maurice Greene once again took center stage, as his behavior has started to spiral out of control.

All season long, Greene has been enjoying his time on the show by drinking a little too much and he's become a disturbance to many of his housemates. Teammate Marciea Allen was so fed up with Greene's behavior that she contemplated leaving the show rather than deal with him any further.

This week saw Greene revert back to some bad habits he had at home by smoking cigarettes outside the house while trying to figure out why he keeps struggling to maintain his focus. Justin Frazier offered him some words of comfort while reminding Greene that eventually his friends and family were going to watch the show and see how he's been carrying himself all season long. Frazier adds that it's doubtful that Greene would be pleased if his children saw how he's been acting all season long and the message is finally starting to get through to him.

At the gym, coach Kelvin Gastelum has a final sitdown with Greene to address his behavior and essentially tell him that he needs to clean up his act before he blows this opportunity. Greene is one win away from the finals and potentially a chance to compete in the UFC, but that could all go away if he can't find the balance between his preparation and his constant acting out at home.

Gastelum and his coaching staff decide that sweating the booze out of Greene's system will be the best way to get him back in line so they put him through a brutal workout to ensure he's learned his lesson and that he's ready for his fight next week. 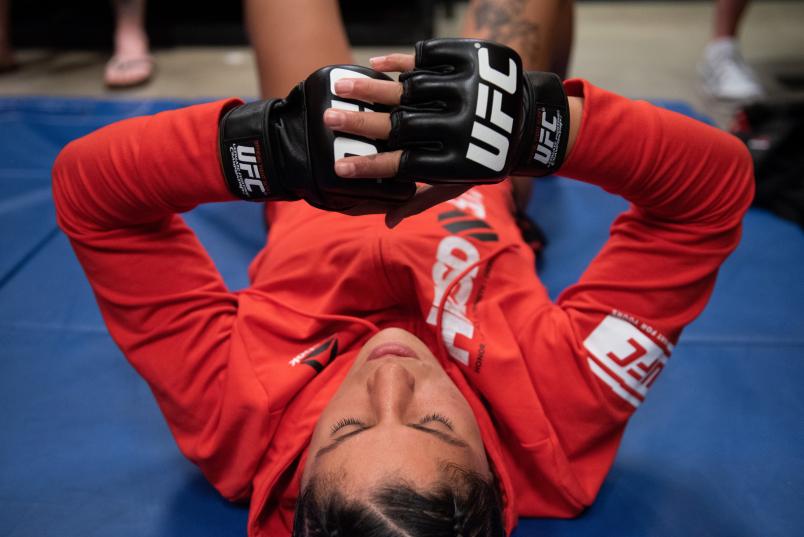 Stoliarenko is willing to engage with her strikes early while working from a distance, but she finally swoops in to look for the takedown. Kianzad quickly pivots and pushes her away. Stoliarenko still seems confident in her striking, but Kianzad is beginning to land with more regularity in every exchange. Kianzad is showing a lot of patience to counter strike Stoliarenko with her punches, moving in and out and never allowing herself to stay open for the takedown. Midway through the round, Stoliarenko dives for another takedown but fails to set it up whatsoever and Kianzad quickly shrugs her off and resets in the center of the Octagon. Kianzad is still landing solid counter strikes while throwing two or three shots with every exchange. Stoliarenko is finally able to get deep on a takedown after setting it up with a jab, but she can't drag Kianzad to the mat. Kianzad fights back from her position against the cage before moving back to the center to start unleashing her strikes. Kianzad lands her best punch of the round with a perfectly timed left-right combination, with the second punch tagging Stoliarenko hard on the jaw just before time expires. 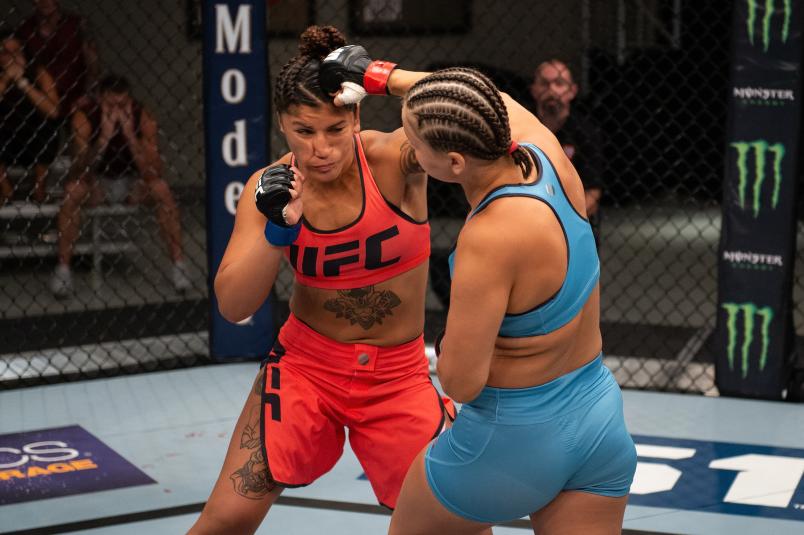 The fighters exchange heavy leg kicks to start the second round, with Kianzad still looking to work her boxing combinations. Kianzad's straight punches, along with the quickness of her counters, are giving Stoliarenko headaches whenever they engage in an exchange. Kianzad is starting to stalk Stoliarenko around the Octagon more and more, pressing her backwards and then unleashing her rapid fire combinations. Stoliarenko jumps in for a combination of her own, but she ends up catching a perfectly-timed counter left hand from Kianzad that drops her to the canvas for a split second. Stoliarenko is quick to get back to the feed and then swoop inside for a takedown attempt, but Kianzad shrugs her off and continues to punish her with punches. As time ticks away, Kianzad is starting to really land her punches in succession while staying on target with every combination. Kianzad is battering Stoliarenko with strikes and she's showing no fear whatsoever of the takedown at this point in the fight. Stoliarenko does manage to get deep on another attempt with just over a minute to go in the round, but Kianzad stays quick on her feet and avoids going to the ground. Kianzad uncorks a big head kick that nearly connects flush, but Stoliarenko is able to absorb the shot. She is definitely eating a lot of big shots this round, though. Time expires with Kianzad in control after a dominant showing that round. 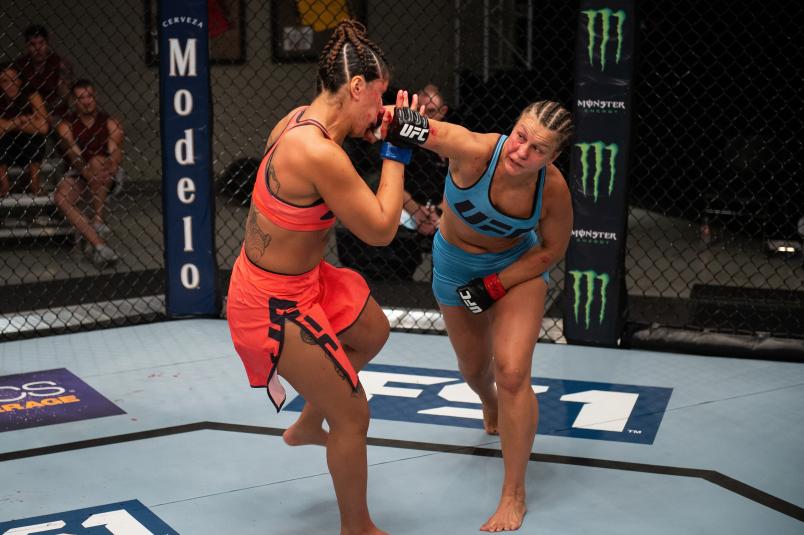 Kianzad is back to the center of the cage, looking to land her best strikes while keeping Stoliarenko on the end of her punches and kicks. Stoliarenko seems content to stay on the outside near the cage wall as she flicks out a single punch or kick without following it up with much more. Kianzad is able to walk through her strikes and then pop her with stinging combinations over and over again. Kianzad is really starting to find a home for her right hand as Stoliarenko stays focused on the left coming at her first. Kianzad throws a low kick and Stoliarenko pounces to look for the takedown, but again she can't get deep enough and she fails to get the fight to the ground. Kianzad is staying very composed in the line of fire, sticking to her game plan and just punishing Stoliarenko with every exchange. Stoliarenko's coaches are begging her to go for the takedown, but she seems content to stay on the outside while Kianzad is getting the better of her with her striking combinations. Kianzad continues to jump in with stinging punches in bunches, with that right hand constantly finding a home on Stoliarenko's jaw. The fighters engage in one final flurry before the round and the fight comes to an end. 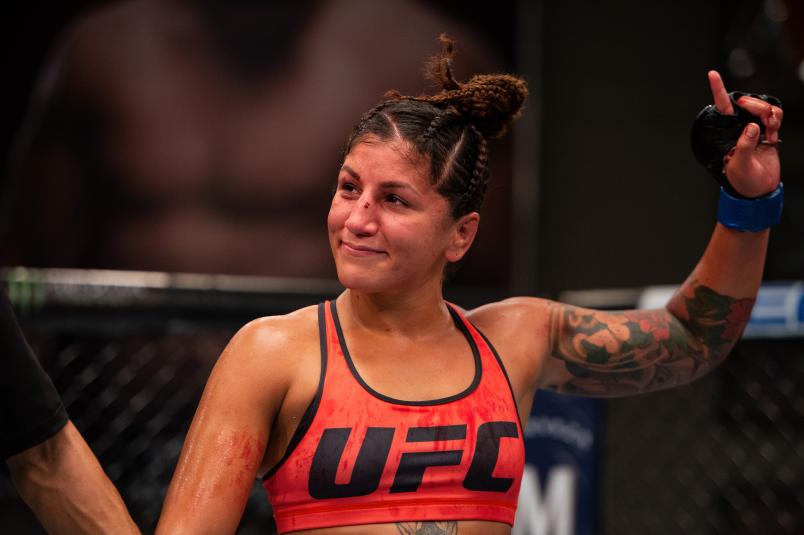 "I knew she wanted to take me down, but I am in way better condition and I was ready for it," Kianzad said after the win to move on to the finals. "I wanted to keep the fight standing. My nose was bleeding, but for me it is just one of those things when it starts bleeding it just doesn't stop! But I knew she couldn't hang with me standing wise.

"I am so proud of Team Kelvin and I love everything about training with them. I am going to give the rest of training my all and do everything in my power to be the next Ultimate Fighter."

With Kianzad now in the finals, the attention will shift back to the heavyweights next week with arguably the most anticipated fight of the entire season as Maurice Greene gets back in action against Juan Espino from Team Whittaker.

These two got into a verbal battle earlier this season and now they will clash with the winner moving on to the finals to face Justin Frazier on Nov. 30 in Las Vegas for that UFC contract.

Who will come out on top in this bitter battle in the heavyweight division?

Watch The Ultimate Fighter: Heavy Hitters next Wednesday night at 10pm ET on FS1 to find out what happens.