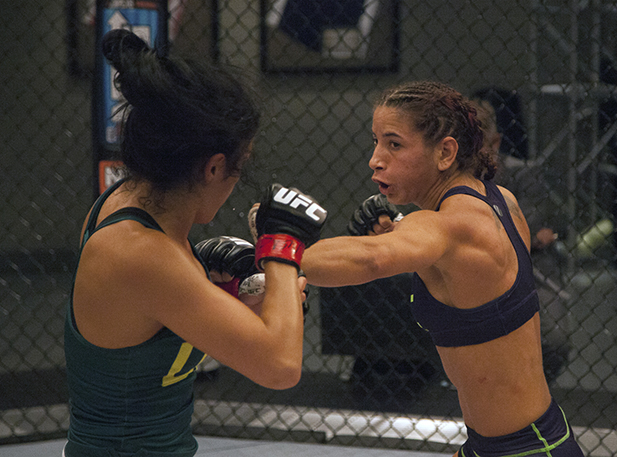 The newest season of The Ultimate Fighter featured 16 of the very best women's fighters on the planet as the UFC launched the 115-pound strawweight division. While only two competitors will get to fight for the title on Friday night, the cast was filled with talent, and many of them will face off this weekend in preliminary action.

Tecia Torres, who was ranked No. 3 in the world at 115 pounds when The Ultimate Fighter tournament started, will look to climb back up to the top of the contenders’ race when she takes on Angela Magana at the finale in Las Vegas.

Also in action is undefeated Muay Thai specialist Joanne Calderwood, who takes on newcomer Seohee Ham from Korea, who brings a wealth of experience into the Octagon.

As we gear up for all the action on Friday night in Las Vegas, today's fantasy preview will examine the preliminary card, including a few of the key matchups to keep an eye on for the UFC Pick Em game this weekend.

When Tecia Torres entered The Ultimate Fighter this season, she was one of the dark horse favorites to not only make it to the finals, but potentially be crowned as the first ever UFC women's strawweight champion. Her end came to a run on two occasions on the show, however, after she was upset by No. 14 seed Randa Markos and then eliminated again by top ranked fighter Carla Esparza.

Despite those bumps in the road, don't doubt for a second that Torres isn't one of the best fighters in the world at 115 pounds. Torres is a fierce combination striker, landing with huge volume in all of her fights, often putting together six and seven punches at a time. Torres showed in her bout with Esparza that she also possesses incredible takedown defense, which should bode well for her on Friday.

Magana is a real veteran of the sport and has faced a who's who list of top fighters during her day. She trains Muay Thai out of Thailand, so she definitely has legitimate stand-up credentials, but her biggest strengths remain on the ground. She's got one of the slickest transitions to armbar in the sport and she's always a danger when the fight hits the mat.
Where Magana runs into a brick wall in this fight is the fact that she’s going to struggle mightily to get Torres to the ground. Magana doesn't have the wrestling pedigree that Esparza does and she had to fight tooth and nail just to get Torres to the mat on a few occasions in their fight and once the bout hit the ground, there just wasn't much action before they were back on the feet again. Torres is incredibly fast, and after going through a tough time adjusting to a new team and coaches on the reality show, she should benefit from being back around her squad at American Top Team.

Torres is still a name to watch in the title hunt for 2015 and it starts with her fight on Friday night.

If you don’t know the name Seohee Ham yet, then Friday night should prove to be a treat for MMA fans. Ham is an exciting addition to the UFC strawweight division after making her mark fighting mostly overseas at 105 pounds. She has an exciting, blitzing style in the Octagon, and while she isn’t as technical as many strikers will be in the UFC, she lands with blunt force every time she steps in with a combination.

She's got a very tough matchup for her debut, taking on the No. 2 seed from The Ultimate Fighter, Joanne Calderwood.

The Scottish strawweight is still undefeated (her loss to Rose Namajunas on the show won't count towards her professional record) and she has some of the best striking in the entire division. Calderwood is fierce striker with power in her hands and brutality in her kicks. She will also punish an opponent inside with elbows and knees.

Calderwood has to be careful getting caught up in too many exchanges with Ham because that’s where the South Korea native thrives by drawing opponents into her style of matchup. If Calderwood can resist the urge to throw caution to the wind and just keeps composed, she should out strike and out land the unorthodox Ham over the course of all three rounds. This bout could be an early favorite for Fight of the Night as well, so don't sleep on this preliminary matchup.

Fierce rivals on the reality show, Bec Rawlings and Heather Jo Clark look to settle their differences in the Octagon this weekend. Both Rawlings and Clark are two of the bigger fighters for this weight class, so it's an evenly-matched showdown for the prelims.

Rawlings is one of the best boxers to come to the UFC with the addition of the strawweight division. She's got long reach and good technical knowledge of the striking arts. Rawlings has a good lead jab that she sets up for the left or right hand following behind it, and as long as she takes advantage of her range, she can keep almost every opponent at the end of her punches.

Clark is a little more well-rounded than Rawlings when it comes to her overall MMA game, but she tends to prefer a submission-heavy attack combined with wrestling. Clark trains with top ranked women's bantamweight star Miesha Tate, so her grappling and wrestling should be on point heading into this bout on Friday night. Clark also fought for most of her career at 125 pounds, so she's got good size for this weight class and should pack a solid punch if she lands.

The biggest factor to watch in this fight is Rawlings' emotional state when the bout begins. She has allowed herself to get too charged up in the past and it's affected her performances when it actually comes time to fight. Rawlings was not a big fan of Clark on the reality show, but she has to keep her emotions in check this time around. Rawlings should be the superior fighter, especially if she employs a boxing-heavy attack while avoiding takedowns.

It's Ireland vs. Australia in this preliminary card matchup, as veteran fighter Aisling Daly takes on Alex Chambers at The Ultimate Fighter finale.

Daly is one of the most experienced fighters on the roster at 115 pounds, and was a pioneer of mixed martial arts in her home country. Before Conor McGregor was headlining shows and selling out arenas, Daly was on the grind each day at her home gym on the Emerald Isle, trying to get recognized for being a standout MMA fighter. Daly is a very well-rounded mixed martial artist to boot, with power in her hands and a good base with wrestling and jiu-jitsu.

Chambers is no slouch when it comes to the ground game, as she tends to prefer a grappling battle as well, but she might be at a slight size disadvantage taking on Daly at the finale. Chambers is naturally a fighter built for 105 pounds, while Daly has spent a big chunk of her career competing at flyweight. Daly even has a win over top 10 ranked women's bantamweight fighter Jessica Eye.

Daly is strong in the clinch and should be able to muscle Chambers around on the mat until she can sink her hooks in and either apply a choke or finish with strikes. Either way, it ends with the Irish fighter besting Chambers before the final horn sounds.