Who were the winners at The Ultimate Fighter season 23 Finale: Jedrzejczyk vs Gadelha 2? Click below to get the results for all the fights at the MGM Grand Garden Arena in Las Vegas on Friday, July 8, 2016. 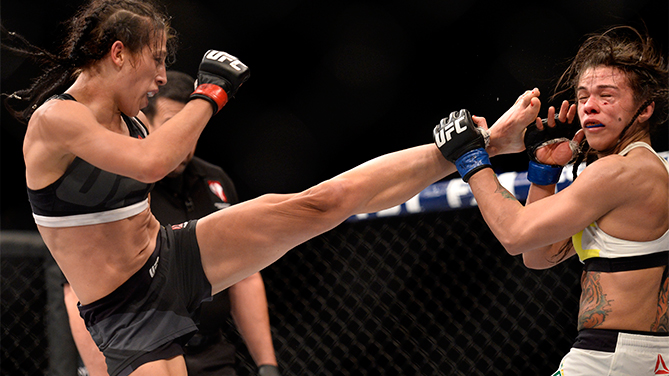 In an instant classic, Joanna Jedrzejczyk retained her UFC strawweight title against Claudia Gadelha in an unanimous decision, 48-46, 48-45, 48-46. It was a back-and-forth affair that started in Gadelha’s favor. The Brazilian knocked Jedrzejczyk down early in the first and then landed some ground & pound with a pair of takedowns. After winning the first two rounds and controlling the champ on the ground for almost seven of the first 10 minutes, Gadelha just couldn’t keep the pace. Jedrzejczyk weathered the storm and then turned up the volume, landing 176 significant strikes in the final 15 minutes to cruise to the win. Jedrzejczyk remains undefeated and improves to 12-0, while Gadelha suffers only her second career loss – both have been to Jedrzejczyk. 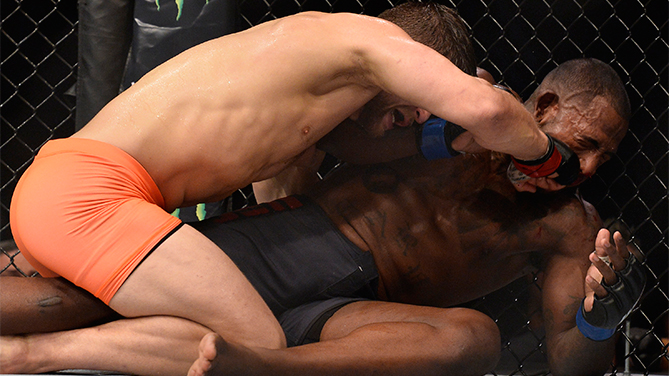 Andrew Sanchez grinded his way to a dominant unanimous decision win against Khalil Roundtree (30-25, 30-25, 30-26) to capture The Ultimate Fighter light heavyweight crown. Sanchez scored six takedowns total and controlled the action for 11:52 of the 15 minutes. 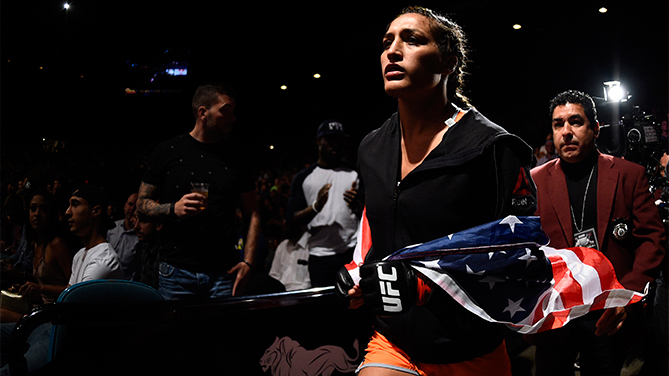 In a thrilling Ultimate Fighter strawweight final, Tatiana Suarez submitted Amanda Cooper by D’Arce Choke at 3:43 of the first round. It was a grappling show the two put on, as wrestling expert Suarez looked to get the fight to the ground almost immediately. Cooper attacked off her back and looked close to an armbar and even a triangle at one point, but Suarez stayed the course and eventually was able to lock in a submission of her own to get the finish.. 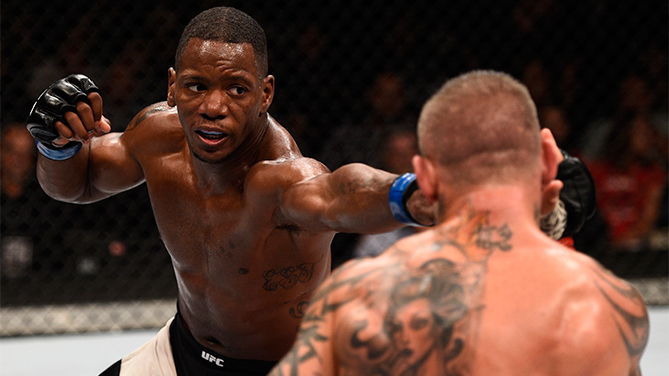 It was the takedowns that ultimately led to the unanimous decision win (29-28, 29-28, 29-28) for Will Brooks over Ross Pearson in the debut for the former world champion in his previous promotion. Brooks and Pearson landed virtually the same amount of strikes – Pearson the more significant strikes and Brooks the more total shots. But in the end it was Brooks’ well-rounded attack and wrestling that made the difference.

They said it:
Will Brooks: "I feel pretty good overall. There was more I wanted to do, but I only had three weeks to prepare, so did the best I could. I'm happy, I'll get better. I had a nagging thumb injury. I jammed my thumb during training and jammed it again during the fight. Fighting tonight was an incredible experience. I had a lot of fun with it. But now it's time to move forward and get on track to fight for that UFC gold. This whole week has been incredible. Everybody is super nice, I didn't feel like I was new to the program, so that felt really good. You take the win for what it is, my coaches and I put together the best game plan we could. Next I'm going to keep moving forward and get better. Before I fight next, I'm getting married I'm going on my honeymoon to Italy and Greece."
Ross Pearson: “I could have been a little more active with my boxing. I kind of respected his pressure as a wrestler but I could’ve been more active with my hands and let it flow. I kind of feel like my work rhythm would take him out eventually. I found that my pace was way faster than his, I was getting after him but I needed a little less rhythm and more combinations. I was just weary of his wrestling at the beginning I was just cautious of that. I knew he didn’t want to stand with me. If I had believed in my own wrestling a little more and just went off and let my combinations go I feel that I would have taken him out.” 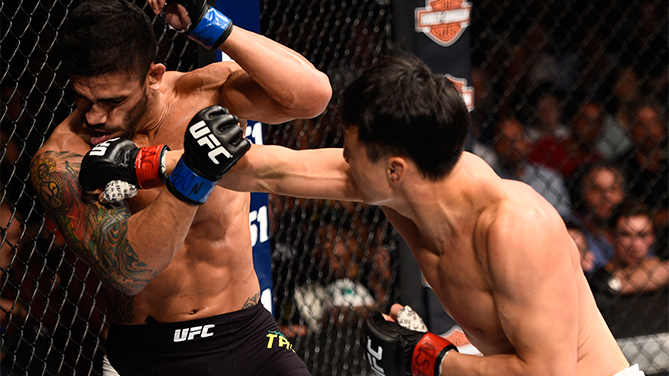 Doo Ho Choi landed a blistering straight right hand that floored Thiago Tavares and Choi jumped on Tavares to earn the TKO finish at 2:42 of the very first round. Tavares landed three takedowns but Choi stayed focused and took advantage of the opportunity when he got back to his feet.

They said it:
Doo Ho Choi: “It went exactly as I expected it to and if you’re confident in your abilities there’s no reason to doubt yourself and there’s no reason to be nervous. My big strength is striking, but honestly when I’m practicing I actually enjoy the ground game more than I do striking. There’s a lot further I can go from here. I want to work my way to the top as quickly as possible. I think the more I fight the more recognition I’ll get, especially in my home country. I really feel like I’m fighting for Korea as well as for Asia.”
Thiago Tavares: "I was confident in my takedowns, I thought I could take him down a hundred times. But he had a good defensive ground game, next time I'll put him down and progress on the ground. I felt confident in my standup but he hit me with the fast right. After this is will go back home to see my family, see my friends and get ready for my next fight." 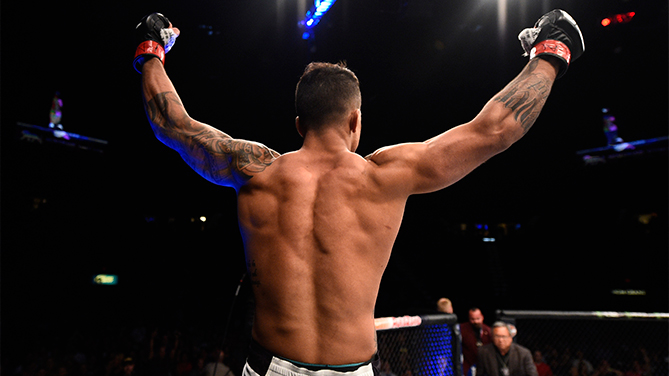 Joaquim Silva landed the finishing blow just 34 seconds into his fight with Andrew Holbrook, knocking him out cold to open the FS1 main card in Las Vegas on The Ultimate Fighter Finale. Silva caught a kick from Holbrook and as they scrambled Silva blasted Holbrook and the rest was history.

They said it:
Joaquim Silva: “I’m very happy with my victory, but if you look at my record I always get quick wins and I always train for this. I train every day, I never take a day off and this is a reflection of my training. I was hoping to end the fight with a punch, I didn’t know how long it would take, but I knew it would be one punch. I was hoping for the first round and I got it. I want to come to America to train in wrestling, I didn’t come here just to be another fighter.”
Andrew Holbrook: “The game plan was to circle to the right and move a lot. I expected that big right. I want to fight again soon, really, really soon.” 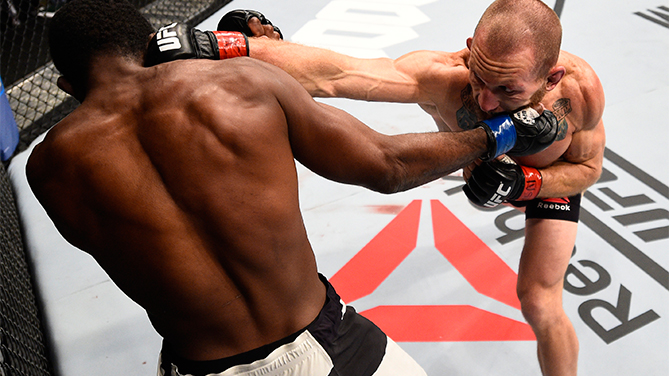 Gray Maynard did just enough each round against Fernando Bruno to take a unanimous decision win (30-27, 30-27, 30-27) to halt a four-fight losing streak in his featherweight debut.

They said it:
Gray Maynard: “That was a tough win. I’m expecting to get better and better in the weight class. The last four years I’ve taken a lot of time off, so it’s not really ring rust, it’s just been getting my training camp organized. This was the best training camp I’ve had in four years, but it’s hard to prepare for a fight like that when your opponent is just winging punches. It’s hard to look good against that kind of stuff because he’s just trying to swing and really wasn’t about technique. I’m going to step back in there. I’d like to be on the Cleveland card. I went to high school back there and I have all kinds of aunts and uncles. I want to keep active, all these long layoffs year after year, I want to keep active and fight three more times.” 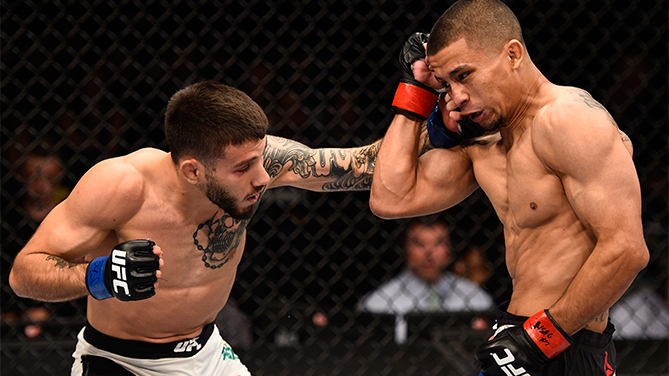 Neither fighter was very accurate in this one, but Matheus Nicolau did enough to sway the judges to earn a split decision win (29-28, 28-29, 29-28) in his flyweight debut.

They said it:
WINNING FIGHTER: “This was my first victory in the flyweight division and I beat the number-six guy in the division. I’m really happy, but I think I can do better. I expected him to come forward more, but I think he respected me too much because he knows that I am a counter puncher. If either of us made one mistake, that could cost us the fight. I was surprised he didn’t go for more takedowns too. I want another big challenge next, I don’t care who it is.” 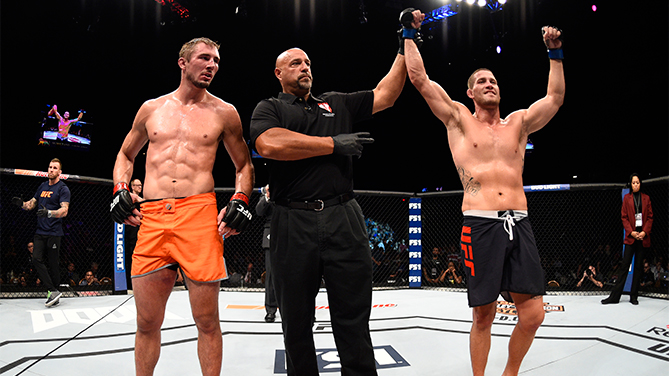 They said it:
Josh Stansbury: “The win definitely means a lot to me. Like I said earlier, I’ve pictured this a million times before and now I’m living my dream. It was kind of bittersweet though. I was supposed to fight Cory in the semi-finals in the TUF house, so I feel like I should be fighting Andrew Sanchez in the co-main event tonight. I just want to continue fighting in the UFC. I’m 31-years-old and I want to move up fast. I’m not going to say what everyone else says: ‘I want whatever the UFC has in store for me.’ I want something bigger than that. I want the winner of The Ultimate Fighter season 23.”
Cory Hendricks: “If I could do it over again I would have gone for that takedown or would have done it better. Josh had good top pressure, he moved really well. I was a little tired when he was on top. I tried to go for a few different things, but it didn’t work and I ended up expending more energy. I need to improve. My takedowns need work, I should’ve kept my range better, I should’ve put combos together better.” 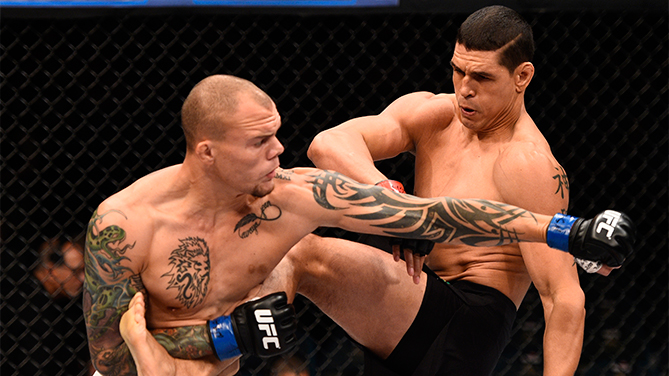 They said it:
Cezar Ferreira: “In the second round I felt the hit and I felt the blood, but it didn’t affect me at all. That was a hard fight, but I want a top-10 guy next.”
Anthony Smith: “I know I had him rocked in the second, I just tried not to over commit. Maybe I should’ve pulled the trigger a little bit more. I have no idea what I would have done differently in the third to pull off the win, but I know I don’t want that to happen again.”

Miss the fights? Watch them on UFC FIGHT PASS now!

Kevin Lee defeats Jake Matthews
Kevin Lee was expected to have the wrestling advantage against Australian prospect Jake Matthews and he proved that to be the case, landing a pair of takedowns and finishing Matthews by TKO at 4:06 of the first round. Matthews was able to get the fight back up after the first takedown and started to land some punches, but Lee didn’t like that at all on took the fight right back to his world and ended it quick once he did.

They said it:
Kevin Lee: “"It was a good win, it was over a tough kid, the youngest kid in the UFC. I just heard he's the youngest guy on the roster, and I was the youngest when I got started. He'll be back, he'll be a top ten contender. Jake keeps going, he’s not one of these guys that's just going to give up. That's why he was the right opponent for me. I used my experience. I knew he was going to come hard for it. But in Australia they don't wrestle like they do in the USA, Midwest style! What's next? We want Iaquinta. I'm going to show up at Times Square with a poster, I want to face Iaquinta this November."
Jake Matthews: “This was my first fight in the United States but the travel nor the time difference made a difference tonight. The only thing I would have changed is that I wish I had won the fight.” 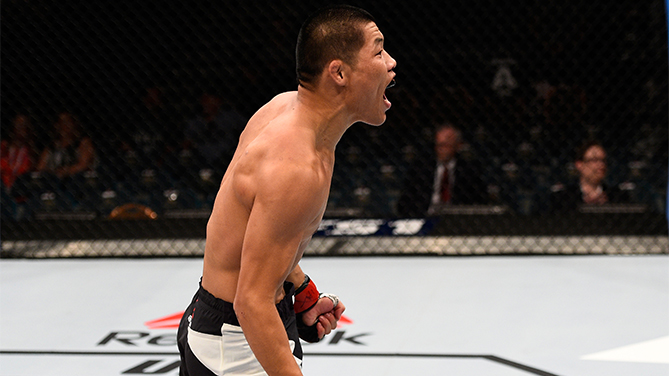 Li Jingliang defeated Anton Zafir by knockout after landing some lethal ground and pound after landing his only takedown of the fight. Jingliang ended the fight at 2:46 of the first round to win his third fight in the UFC.

They said it:
Li Jingliang: “I feel amazing! Thank you to all of my coaches. This is exactly how I wanted it to go down. A beautiful, beautiful knockout.”