Read on for the all the action from episode three of The Ultimate Fighter: A Champion Will Be Crowned. 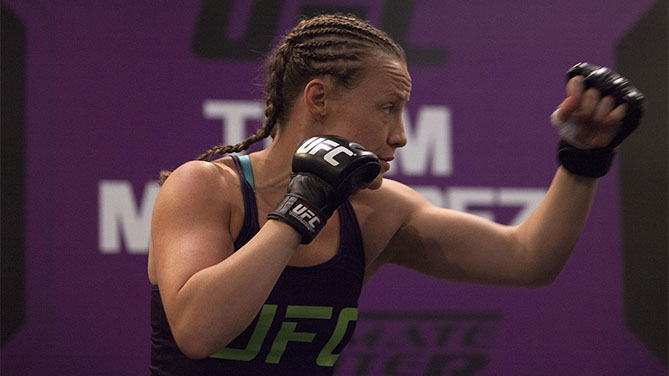 The episode begins on a somber note. Dana White comes into the locker room looking for Bec Rawlings. He takes her into a side room and gives the bad news. After a long bout with Parkinson’s disease, her stepfather passed away. Bec knew that there was a chance of this happening when she left Australia, but the news still hits her hard. Her stepfather was a big fan of her career and she laments that, “I was hoping he could hold on a little longer so he could see my UFC debut.”
The focus then shifts to this weeks fight between #4 Jessica Penne and #13 Lisa Ellis. The two have previously fought under the Invicta banner in what many deemed one of the bloodiest fights in WMMA history. Despite losing the first bout, Lisa looks forward to the rematch. She has more on her mind than simple revenge, though. This will be Lisa’s first fight since giving birth to a baby daughter and her mind is elsewhere. Coach Melendez worries about this distraction and feels that Lisa isn’t 100% mentally there.
> Watch: Lisa Ellis Film Session | Lisa Ellis Practice Highlights
Back at Team Pettis, the mood is considerably better. Jessica is beaming confidence and we see her tap out many of her training partners. Later we hear Jessica speak about how, “fighting changed my life for the positive.” The victim of bullying growing up, Jessica used martial arts as a way to build confidence. If there’s one person that doesn’t lack confidence in Jessica, it’s Coach Pettis. He tells us that Jessica “doesn't realize how good she is,” and thinks that her superior striking ability will lead her to victory. We’ll see how accurate his prediction is because it’s fight time!
> Watch: Jessica Penne Film Session | Jessica Penne Practice Highlights
ROUND ONE
After a short feeling out process, Lisa moves in for the takedown. She drops for a hip toss and Jessica defends. The fight 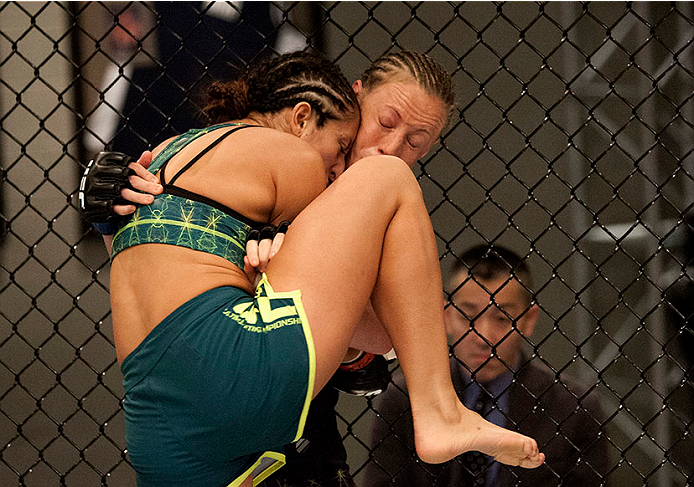 moves to the fence where the two fight in the clinch. After reversing dominant position a number of times, Jessica throws her opponent to the ground. Jessica maintains top control from half guard, but doesn’t generate much offense. Lisa uses this lull to explode from bottom and reverse position. The victory is short lived, though, and Jessica reverses to take back dominant position. She takes back mount and starts to work her hooks into her opponent. She’s too high and Lisa tries to shrug her off, but to no avail. Jessica throws some punches, stretches Lisa out and locks up the rear naked choke. Lisa holds out momentarily, but she ultimately taps out with 1:14 remaining in the first round. 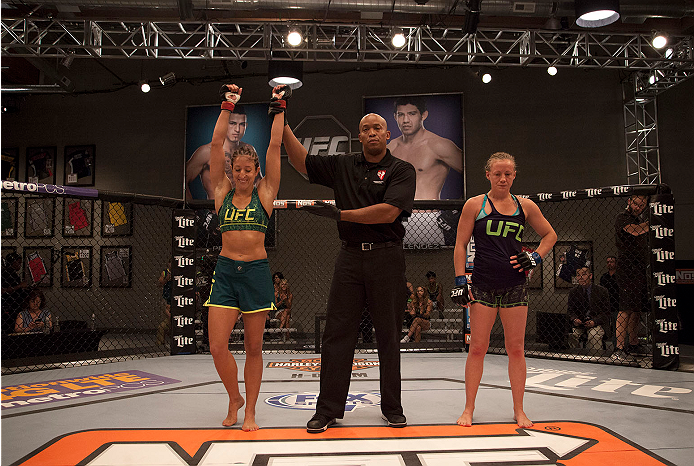 > Watch: The Ultimate Fighter Episode Three Action Gallery
Anthony Pettis is beaming at his third straight win. Gilbert Melendez blames Lisa’s loss on her not mentally being there. There’s not a lot of time to focus on the fight because we quickly move to next week’s fight announcement. It’ll be Team Pettis’s #1 ranked fighter Carla Esparza taking on the inexperienced #16 fighter Angela Hill.
Can Carla overcome the pressure of being the highest ranked fighter? Does Angela Hill pull off one of the biggest upsets in TUF history? Why can’t anyone get along in the ice bath? Find out this and more next week on The Ultimate Fighter!