Read on to find out who won the heated fight between Felice Herrig and Randa Markos. 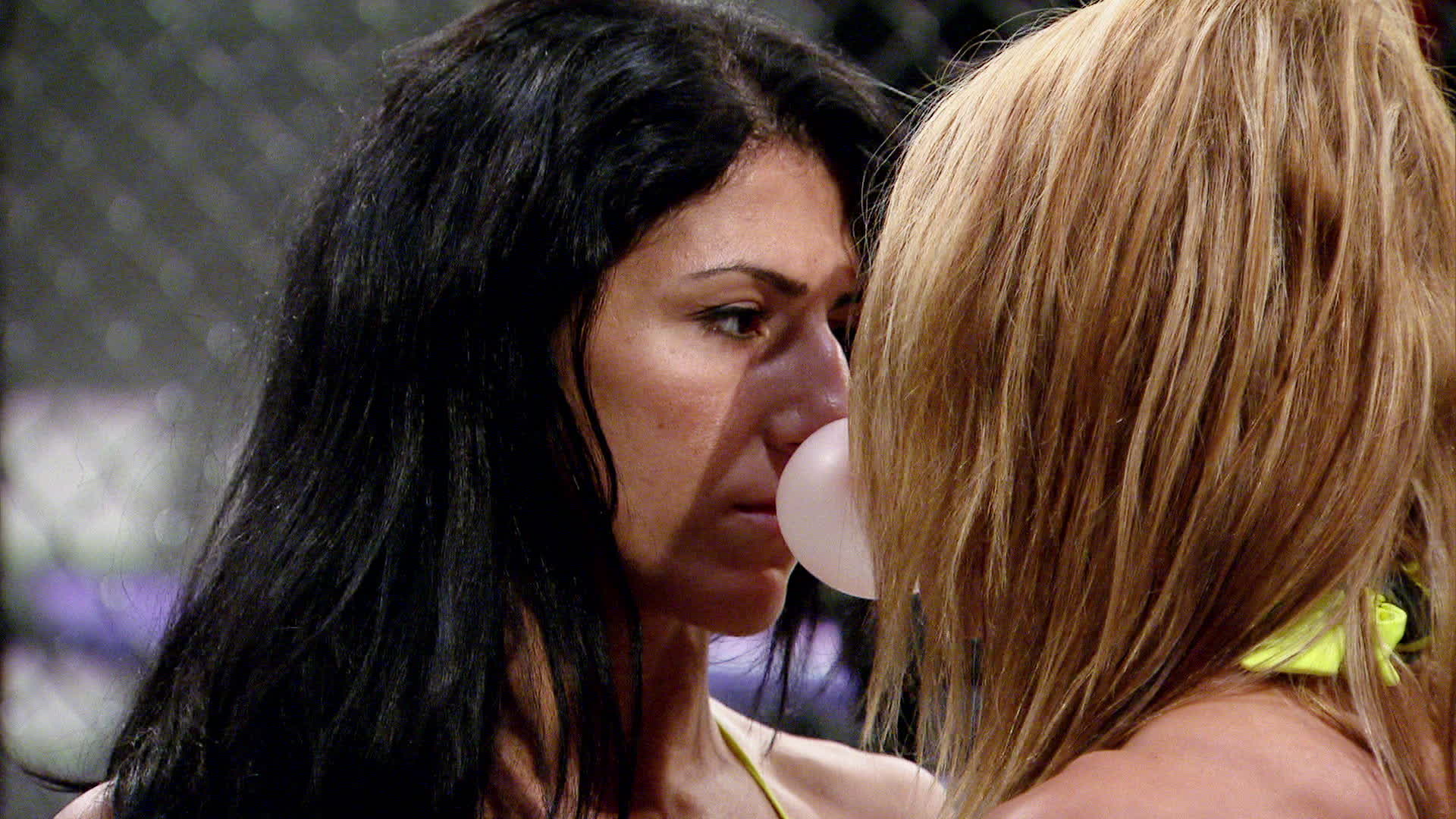 We begin this week’s episode with Team Melendez. After advancing to the quarterfinals, Rose Namajunas “sees the light at the end of the tunnel.” She calls the fact that she’s the only member of her team to advance “bittersweet,” but adds, “[MMA] isn’t a team sport.” As Rose prepares for her next fight, the rest of Team Melendez cracks open a couple bottles of wine and have a party. As Angela Magana puts it, her and Bec Rawlings “went all out.” They even drag in their mattresses to their teammates’ room to have a slumber party. Tecia Torres doesn’t care for all the noise before bed time and sleeps somewhere else for the night. This appears to be the last straw and Tecia finally relents and switches rooms with Angela the next day.
> Watch: Randa Markos Practice Highlights | Felice Herrig Practice Highlights
Back on Team Pettis, they’re having problems of their own. They have 7 of the last 8 fighters in the tournament, and the first among them is between Randa Markos and Felice Herrig. Some of the women feel uncomfortable training alongside potential opponents. Coach Pettis feels the tension in the room and decides to call a team meeting. He asks the women how they want to go about training, and majority chooses to split the team into two separate groups. One group will practice in the evening while the other practices in the morning. The two groups will then alternate day and evening training. Felicia and Carla seem pleased with the deal. Tecia says she doesn’t care, but calls the women who won’t train with their opponent in the room “princess-y.” 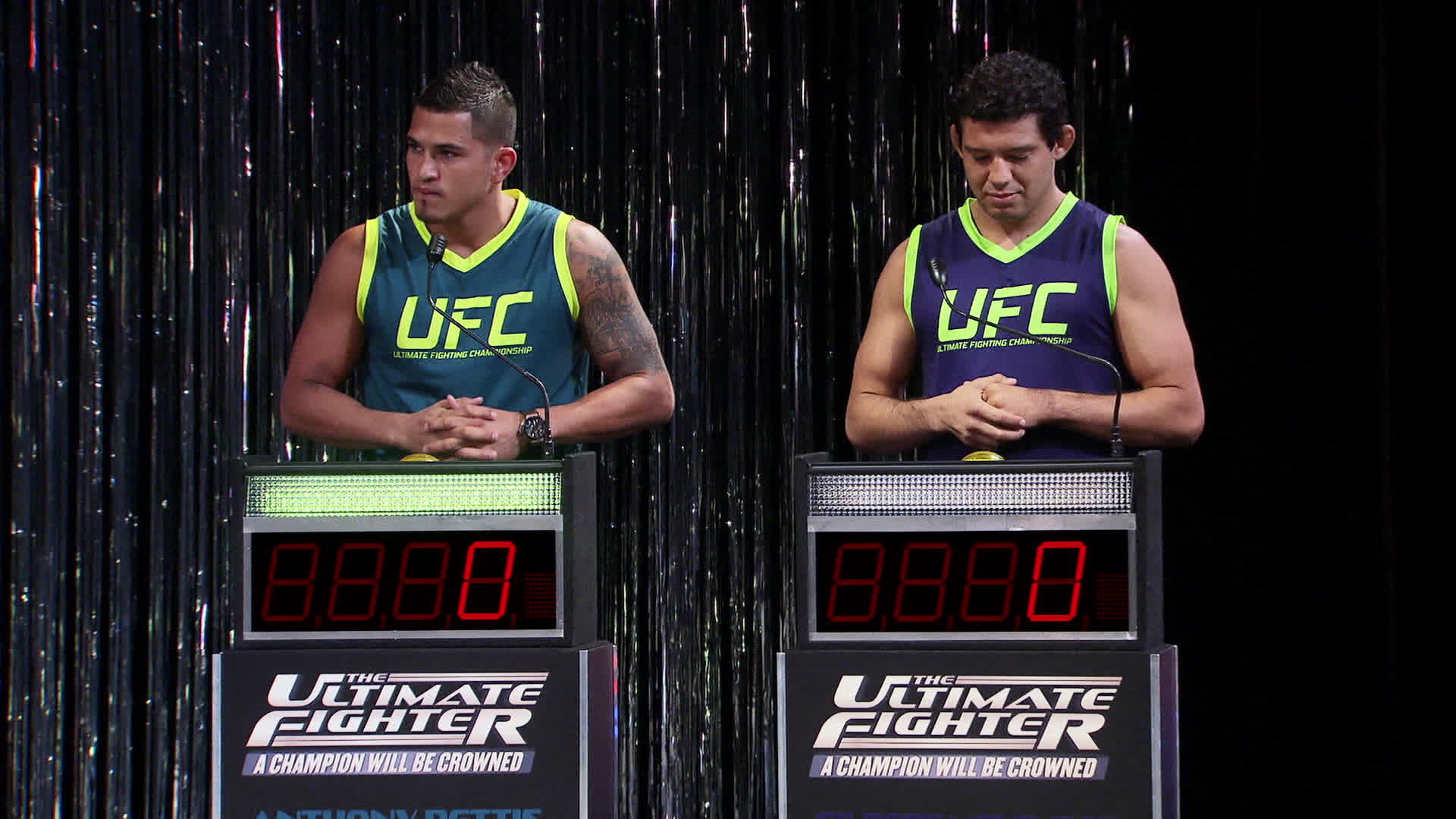 As Anthony Pettis struggles with how to organize practice, he has another challenge in front of him. Specifically, this season’s coaches’ challenge! If an Ultimate Fighter first,
the competing coaches battle wits instead of athleticism. Bruce Buffer shows up and reveals that they’ll be doing battle in three rounds of trivia. After testing their knowledge in trivia on The Ultimate Fighter, UFC history and “Famous Finishes” inside the Octagon, Gilbert Melendez leads 1800 to 900. Neither fighter answers the sudden victory round question correctly, but Melendez’s holds on to earn the win. He takes home $10,000 or himself and $1500 for each member of his team.
> Watch: The Ultimate Fighter season 20 Coaches Challenge
We cut back to Team Pettis as Randa prepares for her fight. She plans on going for the takedown because “there aren’t too many girls here that can defend my ground game.” She also doesn’t plan on abiding by the team agreement from earlier. She won’t be deterred from practicing and says she’ll stick to training twice a day. Felice doesn’t appreciate her
disobeying the agreement. Randa had the chance to speak up during the team meeting and she wouldn’t do it. Felice calls Randa a “coward” right to her face and uses this personal disdain to fuel her training. She adds, “I really dislike this girl. When the cage door shuts, I’m going to make her face very sore.” Randa is unfazed by Felice’s words and can’t wait to climb into the Octagon with her. After an intense weigh-in, we’ll see if the personal animosity affects their performance because it’s fight time!

ROUND ONE
Felice opens with her jab. She works her straight punches and maintains distance. Randa finally slips one and forces the collar tie. They battle inside the clinch and move against the fence. Randa moves for an outside trip, but Felice reverses and takes top position. Randa quickly recovers and the two fight for under-hooks. Felice then moves for a trip takedown of her own. Randa defends and throws Felice to the ground with a hip toss. Randa advances and traps Felice’s arm between her legs. She extends her hips and finishes the straight armbar with 2:46 remaining in the round.
> Watch: Felice Herrig vs. Randa Markos Fight Replay
After the fight Randa tells a teammate, “I hope this shuts her up.” Unfortunately, she says this right next to Felice’s friend Carla. Not willing to let her friend get insulted, Carla fires back, “Maybe if you weren’t such a bitch, she would.” Randa simply replies, “You’re next.”
We close with a sneak preview into next week’s episode. Can Aisling Daly defeat teammate Jessica Penne? Does the tension around Team Pettis continue to rise? How much does Conor McGregor talk? Find out this and more next week on The Ultimate Fighter!