Read on for the results from the seventh episode of The Ultimate Fighter: A Champion Will Be Crowned. 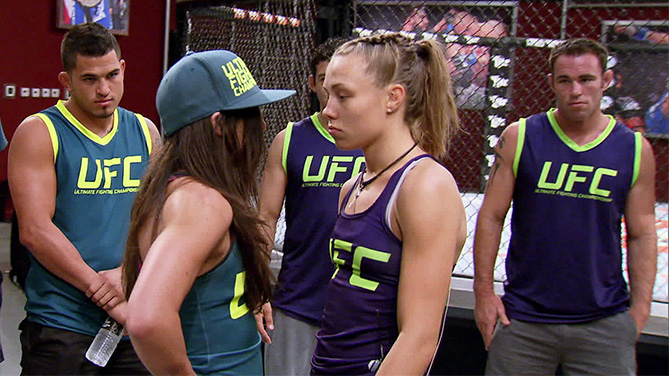 The tension between the members of Team Melendez continues to rise as we open this week’s episode. Lisa Ellis is the latest member to join Heather Clark as persona non grata among the team. The major issue seems to be the fact that both Lisa and Heather do not fully participate in practice. Heather’s knee has bothered her for awhile, but Angela Magana and others think she’s faking. Coach Melendez places some of the blame on the six fight losing streak. He’s still holds out hope that the team can come together.
That shift in team unity needs to begin with #7 ranked Rose Namajunas. As she prepares for her fight against #10 Alex Chambers, she knows the added pressure exists. Bust she’s quick to dismiss it because, “At the end of the day, this is not a team sport.” Rose thrives on pressure, and thanks it with getting her this far in her career. At the same time, this pressure wears her down, and we later see footage of her crying during practice. Gilbert and guest coach Kron Gracie consider Rose to the best member of the team, but she doesn’t have that same confidence. She wants to be even better. Later in the episode we hear about how Rose has battled through sexual harassment and other difficulties growing up. She admits that her “Thug Rose” persona was a way of hiding that fear and shame, but wants people to know that it’s ok to talk about those feelings. Oftentimes victims of abuse feel like it’s their fault and Rose pleads for them to stop thinking that way.
Back at the TUF house we learn more about Team Pettis’s Alex Chambers. Born in Sydney, Australia, she was exposed to martial arts at a young age. Her passion for karate soon morphed into one for MMA and she’s on the cusp of becoming UFC champion. Given her education in physics and engineering, she confesses that her parents are less than pleased with her career choice. She understands their opposition, but refuses to let it sway her. “[Fighting] is my dream,” she tells us, “Why not do what you love?” At 35 years old, though, she knows that her timeline is limited.

We cut to a Team Pettis training session and it looks like their undefeated streak has made them immune to team conflicts. Anthony says he can “feel the tension in the room” and attributes it the fact that many of them will have to fight one another in the later rounds of the tournament. The true answer isn’t quite that simple. Carla says that many of the girls are “not cool” training partners and unhelpful. Randa finds Carla, Felice and Jessica to be too clique-y and says that she’s looking forward to fighting one of them. As far as the gameplan for Alex, Anthony Pettis is familiar with Rose. They used to be teammates on Roufusport in Milwaukee with one another, and spent a lot of time on the mat together. He admits that Rose is dangerous everywhere, so he wants Alex to “fight smart,” counter off Rose’s kicks and look for the takedown.

We return to Team Melendez and the results of Heather Clark’s MRI have arrived. It looks like she has a full ACL tear and will require surgery. Heather tries to remain positive and see the silver lining, but it’s definitely going to take time. She also announces the results to the rest of the team and asks anyone who thought she was “faking” to check the results themselves. There aren’t any takers. Angela Magana and Bec Rawlings admit they were wrong and offer their apologies. Megan Rapinoe and Sydney Leroux from the US Women’s National Soccer Team stop by for a Q&A and then it’s fight time!
ROUND ONE
Alex keeps her distance in the early moments. The two trade jabs and clinch. Alex connects with a sharp overhand right that causes Rose to retreat. After she shakes it off, Rose throws a right hand of her own and 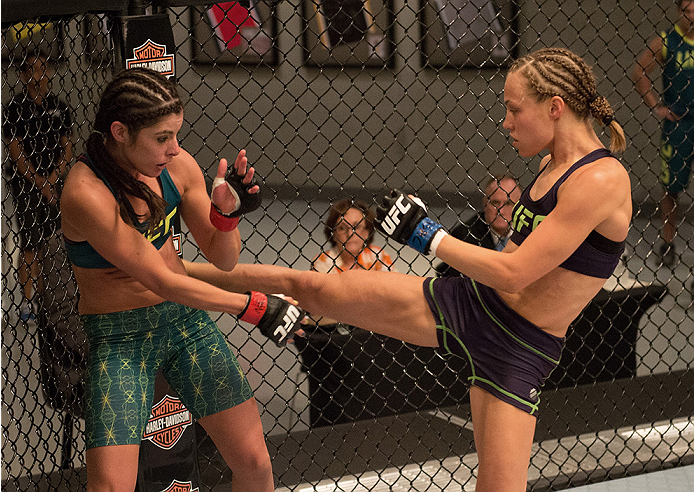 shoots in for the takedown. She backs Alex against the fence, but can’t finish it. Instead of wasting energy, Rose breaks the hold and lets loose with a barrage of punches. Alex tries to return fire, but Rose lands a greater volume of strikes. Rose then moves in for another takedown and finishes. Working from half guard, Rose is unable to advance position and Alex makes it back to her feet. Rose kicks again and Alex counters with a double leg attempt. Rose defends and grabs a waist lock. She struggles to get position, but finally jumps on Alex’s back and gets her hooks in with 27 seconds to go. After a few short punches, Rose locks up the rear naked choke hold and Alex Chambers taps out at the 4:38 mark of the first round. 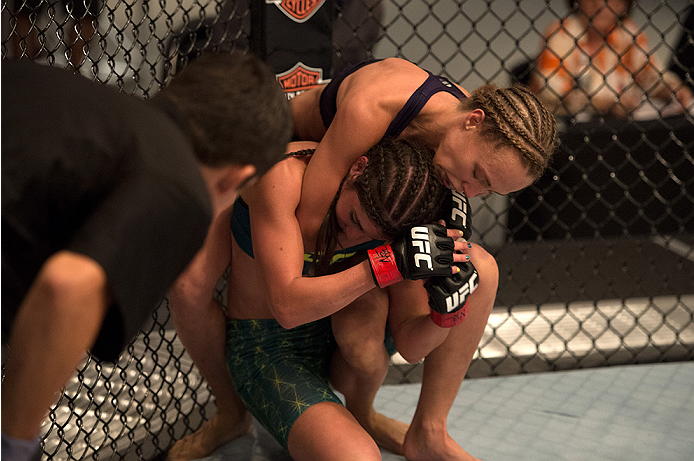 After Gilbert Melendez lets out a “Yes...finally” sigh of relief, he heaps praise on Rose’s performance. He credits her creative attacks and well versed kicking arsenal with keeping Alex off rhythm. Anthony thinks that Alex lost her confidence before she even stepped into the cage. He calls it a “mental loss,” and thinks she let Rose get into her head.
Team Melendez finally has control for the first time this season, and it’s worthless. The eighth and final first round fight fight will be Tecia Torres and Bec Rawlings. Can Tecia capitalize on her second chance? Does Bec give Team Melendez some extra momentum heading into the next round? How can you possibly be unhappy at a pool party? Find out this and more next week on The Ultimate Fighter!