Read on to see who moved on in the sixth episode of The Ultimate Fighter: A Champion Will Be Crowned! 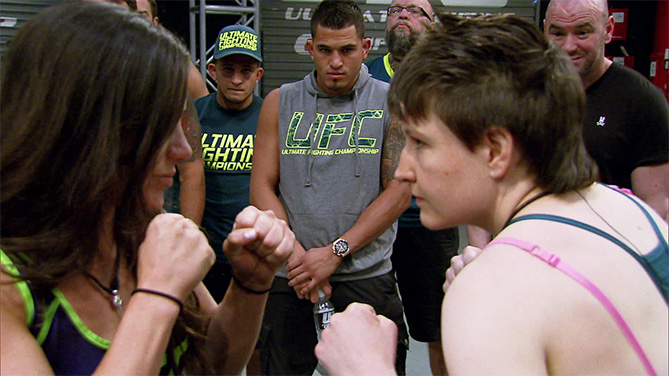 We start this week’s episode with the focus firmly on No. 12 Angela Magana as she prepares for her fight against No. 5 Aisling Daly. Born to drug addicted parents, she tells us that, in many ways, she’s been a fighter since day one. She doesn’t let her difficult past sidetrack her from her goal, though. She’s firmly focused on her fight, and certainly doesn’t lack confidence. Every fighter says they’ll knock their opponent out, but Angela goes a step further. She says that she has a “premonition of a TKO.” It’ll be a tall order to knock out the Irish scrapper, but Angela dismisses her opponent as a “brawler,” and feels that her superior skill set will lead her to victory.
Back on Team Pettis, Aisling Day struggles with the desert climate. They don’t get Las Vegas style heat back on the Emerald Isle, so it’s been taking a toll on her ability to train. If the heat wasn’t enough, she also feels that Matt (the strength and conditioning coach) has been overly negative towards her accusative. It’s here that Aisling tells us that she has a history of anxiety and depression and currently takes medication to deal with these issues. She realizes that a stigma may still exist around mental health, but she wants everyone to know, “It’s ok to talk about it.”
We shift back to Angela Magana, who shed more light on her past. She’s suffered a broken back, car accidents and the death of a fiancé and many other tragic events in her life. It’s been a long, arduous path, but she credits MMA with keeping her focused.  She tells us that “MMA has been my saving grace,” and kept her from succumbing to drug and alcohol abuse. Coach Gilbert Melendez knows that Angela is a survivor and likes her chances despite being the lower ranked fighter. He wants Angela to use her footwork and throw punch combinations. He sees Aisling as more of a single punch boxer and would like Angela to close distance, get the bodylock and finish the takedown. Angela, on the other hand, has a much simpler strategy. “My game plan is to beat your ass no matter what your style is.”

We return to Aisling who describes her path to MMA as a “fluke.” She started training at a karate dojo, learned a little jiu jitsu and has been “hooked” ever since. She also mentions that watching UFC fights on VHS (what’s that?) lead her to a career in mixed martial arts. Competing professionally since she was 18 years old, Aisling should be considered a pioneer of Irish MMA period -- male or female. Coach Anthony Pettis calls Aisling’s style “unorthodox,” but admits that “she probably hits me the most in sparring.” He doesn’t worry about Angela’s striking prowess and calls her Muay Thai abilities “basic.” As far as tactics are concerned, Aisling seems to share Angela’s view. “I don’t know my game plan,” she states, “but I know I’m better than her.” We’ll see whether or not this confidence is misplaced because it’s fight time!

ROUND ONE
Aisling throws a big haymaker and the two soon clinch. Angela finishes the takedown and moves directly to side mount. A few short punches cause Aisling to roll over, expose her back and Angela quickly takes advantage. She tries for the rear naked choke, but Aisling wisely tucks her chin to her chest. Aisling attempts to stand up and shake her opponent off, but Angela shifts her weight and drags Aisling back to the mat. 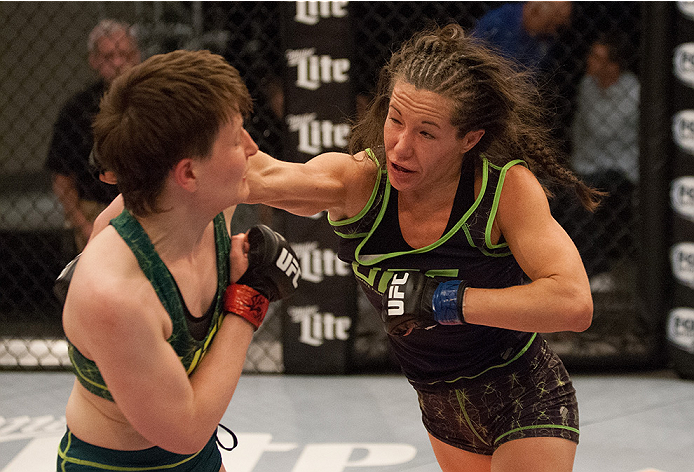 Angela keeps fighting for the choke and Aisling tries to shake her off again. This time, Angela transitions to an armbar, but stalls. The referee warns her to “advance position,” but in a controversial move (considering Angela still has Aisling’s back) he decides to stand them up. Soon after the restart, the two fighters clinch again. Aisling goes for a hip toss, but Angela defends and returns to the middle of the cage. Aisling finds a home for her right hand, Angela moves in for a single-leg takedown and the round ends with a scramble.
ROUND TWO
Despite spending most of the first round fighting off submission attempts, Aisling comes out hard, landing her punches with a high accuracy. This forces Angela to go for the takedown, but Aisling sprawls and continues her assault. Jabs, crosses, hooks and any other punch Aisling throws find their mark. Angela drops for 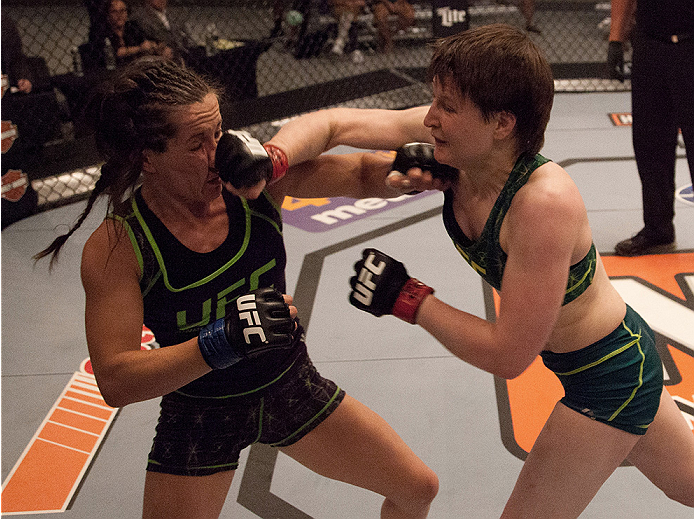 another takedown, but Aisling defends again. The Irishwoman then shoots for a takedown of her own and succeeds. Angela returns to her feet, but Aisling remains on top of her. She jumps up to take a standing back mount and forces Angela back down. Aisling works a couple different submissions, but Angela holds on tight until the end of the round. Angela has round one, Aisling has round two. We’re heading to sudden victory!
ROUND THREE
Both women meet in the middle to start the third round and exchange kicks. Angela tries to grab on of the kicks and move into a single leg, but Aisling brushes her aside. Aisling grabs a waist lock, pulls Angela to the ground and searches for another rear naked choke. Now it’s Angela’s turn to shake Aisling off, but she can’t do it. Aisling flattens her out and brings the ground and pound. She gains control of one of Angela’s wrists and there’s nothing the Team Melendez fighter can do to defend herself. The referee calls the fight with 2:34 remaining. Aisling Daly continues Team Pettis’s undefeated streak with a TKO victory.
Both coaches admit Angela’s conditioning played a major part. She fatigued as the fight progressed and that allowed Aisling to take advantage. The referee’s decision to stand them up in the first round also played a role. Angela vents her frustration while Melendez calls it “a mistake.”
> Read: Conor McGregor talks Aisling Daly
We move to the fight announcement and it will be Team Pettis’s #10 ranked fighter Alex Chambers taking on #7 Rose Namajunas. Can Rose give Team Melendez their first win? Does Alex Chambers stifle her opponent’s explosive offense? How come nobody yelled at Heather Clark this episode? Find out this and more next week on The Ultimate Fighter!