Read on for the results fromthe fourth episode of The Ultimate Fighter: A Champion Will Be Crowned.... 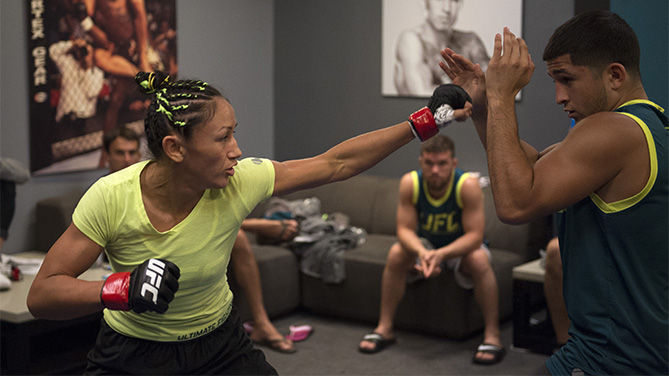 The episode begins inside the a Team Pettis training session. This week, though, we’ll have to call it Team Faber. Due to a “prior engagement,” Coach Pettis asked Urijah Faber to come in to drill the team. A former TUF coach of his own, Faber was more than happy to take up Showtime’s offer. After working with the team, Faber singles out Joanne Calderwood as “the lead horse.” He might want to use different language the next time around, but I’m sure Joanne appreciates the compliment anyway.
> Read: Coach's Corner Q&A -- Urijah Faber
We then shift to Team Melendez where #16 Angela Hill prepares for her fight against #1 seed Carla Esparza. In a sound bite on par with “Let me bang bro” in terms of TUF greatness, Angela tells us, “[Women] can vote now, but we can’t fart in public.” Besides flatulence empowerment, Angela plans on pulling the biggest upset of the season. Her greatest weapon in the fight will be her striking. Despite only having one professional MMA fight, Angela has an undefeated Muay Thai record. Coach Melendez plans on using her kickboxing and KO power to “sprawl and brawl” her way to victory.
> Watch: Angela Hill Practice Highlights | Angela Hill Film Session
As Carla and Angela prepare for their fights, two other housemates have to battle with injuries. Both Heather Clark and Justine Kish are having knee problems and can’t fully participate in practice. Heather’s knee problems are compounded by the fact that she’s not getting along with teammates. Other members of Team Melendez are annoyed with her, and their patience is wearing thin. Angela Magana is especially tired of hearing Heather’s “whining,” and blows up at her for not sharing the ice bath.
Back at Team Pettis, Carla “Cookie Monster” Esparza tells us a bit more about her background. She started wrestling her junior year, and despite the boys on the team placing bets on when she would quit, she actually earned a scholarship to wrestle. While she was on her way to becoming a 2x All-American, she trained other martial arts in the summer to stay busy. One day she decided to put it all together and those skills propelled her to the Invicta championship. She has all the tools, but Carla still seems to be having a crisis of confidence. She hasn’t competed in over a year and a half, and she wonders how she’ll react to the ring rust. We’ll see if it has any effect because it’s fight time!
> Watch: Carla Esparza Practice Highlights | Carla Esparza Film Session
ROUND ONE
Both fighters move to the center of the Octagon and remain patient. Carla connects with the first strikes of the fight and 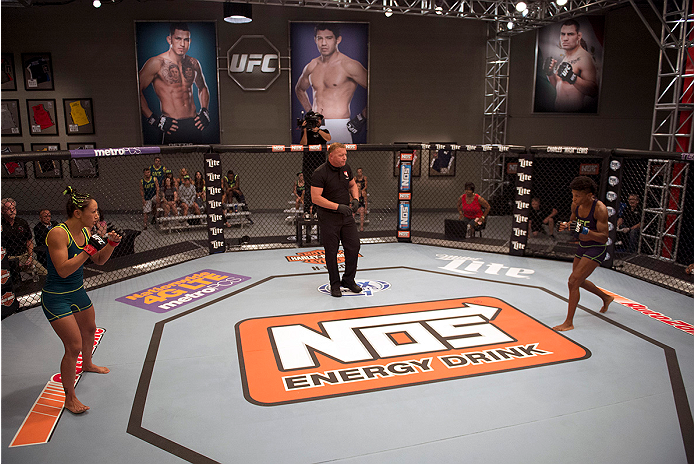 backs off. She attempts a shot from too far away and Angela easily side-steps it. Angela lets her hands go and finishes the combo with a kick. Carla blocks the kick and then grabs the leg to score the first takedown of the fight. Working from guard, Carla slams Angela on the ground to get some separation. Angela tries to escape to her feet, but Carla uses the opening to take back mount. Angela rolls through and changes positions, but Carla is clung to her tight. Carla throws a few punches to soften Angela up, and then looks for the rear naked choke. She slowly advances, but just can’t seem to get her forearm under the chin to finish. Angela scrambles to her feet, but Carla firmly plants her back down to the mat. Angela returns to her feet, but Carla jumps on her back and locks up the rear mount standing up. This time, the arms are in the right place. Angela falls to her knees and taps out with 1:18 left in the first round. 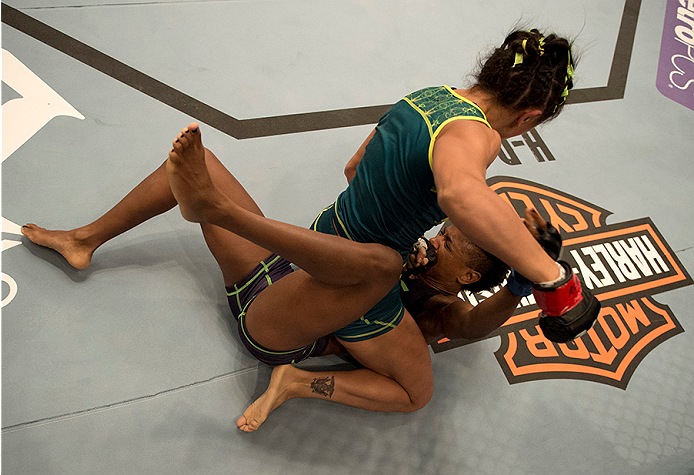 Pleased with his fourth straight victory, Coach Pettis says that everything went according to plan. Angela came out in a “defensive stance” and her fear or the takedown prevented her from really opening up her striking game. Coach Melendez thinks that Angela got a little overexcited and made a tactical error when she decided to kick. He gives Carla credit, though, and says she “showed why she’s the #1 pick.”
We move to the fight announcement and it will be the highly anticipated rematch between Felice Herrig and Heather Clark. Will Heather’s emotions and knee injury get the better of her? Is Felice Herrig a little too overconfident? What injured fighter will have to leave the show? Find out this and more next week on The Ultimate Fighter!