On the second episode of The Ultimate Fighter 26, DeAnna Bennett punched her ticket into the next round following a rousing performance against Karine Gevorgyan in the latest battle between Team Alvarez and Team Gaethje.

Before the fight kicked off this week, lightweight contender Justin Gaethje found out the hard way how tough it was going to be to communicate his message to Gevorgyan, considering she spoke very limited English. Gevorgyan joined the show from her native Armenia, but required a translator throughout filming of the show to help her talk to coaches and the other fighters.

Unfortunately, Gaethje struggled to relay his messages to Gevorgyan after arriving at the house just a few days before the fight as he started to put together a game plan for the matchup. In Gaethje's mind, Gevorgyan was one of the strongest strikers in the house, and if she could keep the fight standing against Bennett, it would greatly increase her chances of walking away victorious. 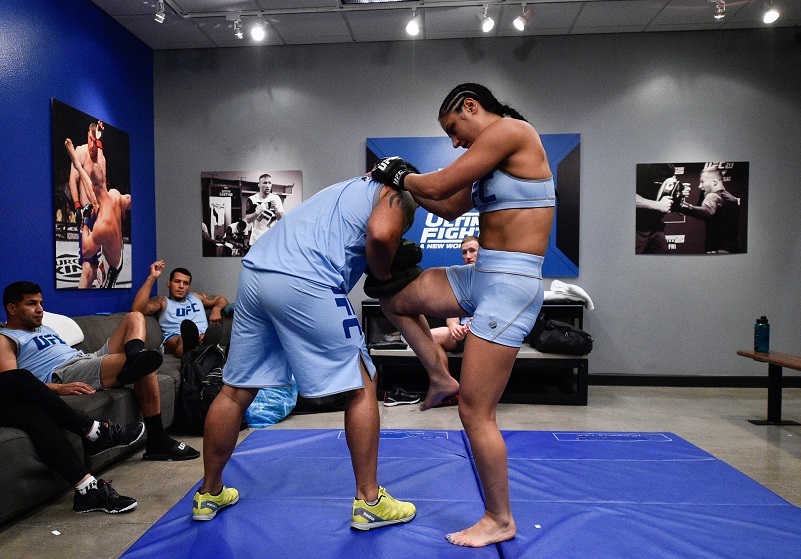 Meanwhile, Team Alvarez was dealing with an entirely different problem after the fighters took a good look at the tournament format that was pre-selected before they arrived on the show. Because this season was set up to crown a new champion, UFC matchmakers had already seeded the fighters ranked from No. 1 to No. 16, with the fighters being divvied up to their respective teams based on the picks from the coaches. While past seasons have allowed the coaches to dictate the matchups through the opening round before teaming up with UFC President Dana White to determine the quarterfinals, this tournament is already set up for each round all the way through the finals.

That means the next round of the tournament could see several fighters from Team Alvarez against opponents also representing Team Alvarez. The tension about training with a teammate one day and then fighting them the next has already raised some problems after Lauren Murphy asks to work with her coaches on a specific takedown she wants to use in a potential matchup against Barb Honchak, who is also part of Team Alvarez. Needless to say, that will put a lot of pressure on Alvarez to ensure his fighters are getting all the necessary help and instruction without ever showing favoritism to any one fighter preparing for battle.

Over on Team Gaethje, the fighters went through an intense grappling session to help them brush up on submissions and ground defense, but one particular matchup ended in injury.

Emily Whitmire, the No. 8-ranked flyweight in the tournament, let out a horrific shriek in pain after suffering some sort of rib injury in her grappling session. The pain was so intense that Whitmire was nearly brought to tears while lying on the ground until medical personnel could arrive to check her out. Back in the training room, Whitmire was forced to concede that a trip to the doctor's office would be necessary to find out if she actually fractured a rib, which would all but guarantee she'd be knocked out of the competition.

Thankfully, an x-ray showed no actual damage to the bones, but instead the doctor revealed that Whitmire likely suffered some sort of strain to the muscle or cartilage surrounding the ribs. It's still a painful injury, but nothing that would necessarily knock her out of the tournament. The only bad news, however, is that Whitmire will almost certainly need a few days to recover before she can train again, and there's always the chance that she could be selected to fight next before she's fully healed.

From there, it was time for the fight between Bennett and Gevorgyan, and each one of them had a lot on the line.

Bennett was a former flyweight prospect who started out her career with a very impressive undefeated run until she decided to take a shot at moving down to strawweight in an attempt to catch the UFC's attention. Unfortunately, the move resulted in three losses in a row and so Bennett is now trying to reclaim her spot atop the flyweight division by vying for a championship this season. As for Gevorgyan, she flew halfway around the world for the opportunity to compete in the UFC, and now she's got her shot as a dark horse candidate in the tournament. 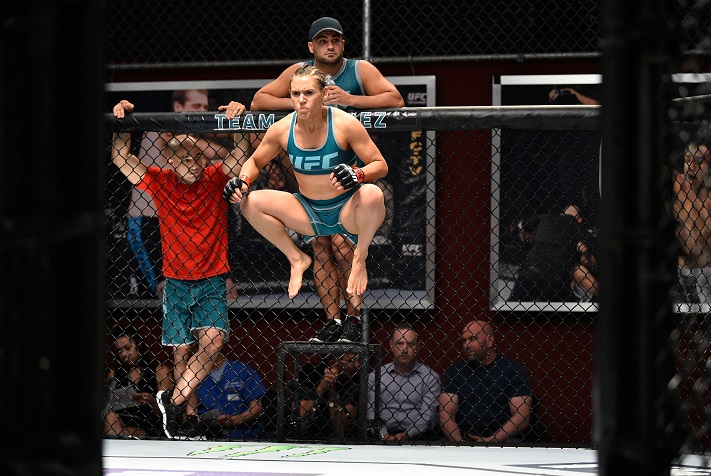 ROUND 1
Bennett opens with strong kicks to the legs, pawing away at Gevorgyan from the outside. The Armenian fires back with a solid overhand right that clips Bennett during one exchange. It seems each time Bennett presses forward, Gevorgyan continues to land that overhand right. Bennett finally lands her own punches with a big combination that backs Gevorgyan up against the cage wall as Eddie Alvarez screams that she's hurt. Gevorgyan recovers nicely but Bennett has her timing down now and she's landing with more regularity.

Just about two minutes into the round, Bennett leaps into a beautiful takedown that plants Gevorgyan on the ground and pinned against the Octagon wall. Bennett starts unloading with punches on the ground and Gevorgyan has no answer. Bennett just continues the assault, with nasty punches slipping through her opponent’s defense. Finally, the referee sees enough and steps in to stop the fight before Gevorgyan can take any more damage. 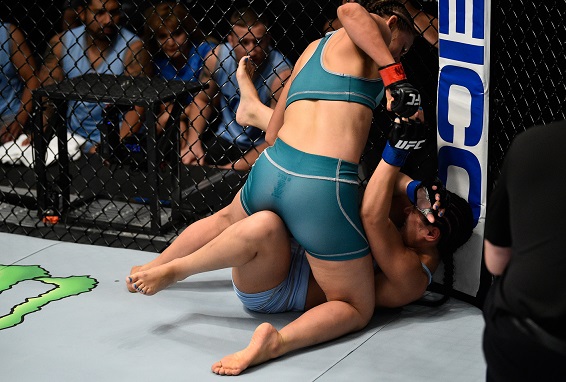 DeAnna Bennett def. Karine Gevorgyan by TKO (strikes) in Round 1

Bennett celebrated the victory while Gevorgyan was brought to tears following an emotional loss in the opening round of the tournament. Bennett will now move on to the next round after delivering a very impressive showing in her first fight of the season.

Following that fight, the next matchup was announced, as No. 6 seed Montana Stewart will take on No. 11 seed Ariel Beck to determine the next fighter moving on in the tournament to crown the first ever women's flyweight champion in the UFC.

Don't miss a minute of the action when The Ultimate Fighter returns next Wednesday night at 10pm ET on FS1.