Read on to find out who won the bout between Joanne Calderwood and Emily Kagan. 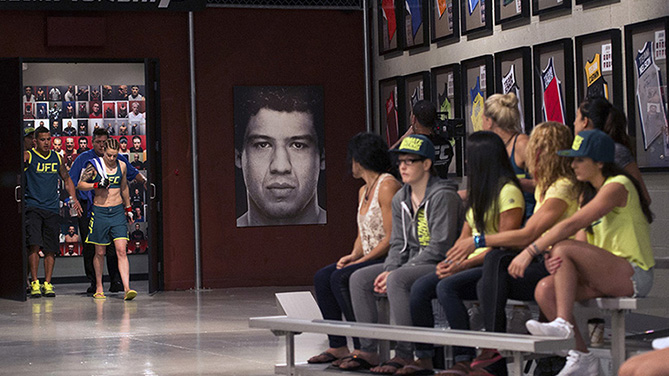 The show beings in the aftermath of Randa Markos’s huge upset last week. Team Pettis is back at the TUF house taking some celebratory shots. Even though they’re non-alcoholic, they still cause the women to recoil worse than cheap tequila. Anthony Pettis and the rest of his coaching staff also show up to celebrate, bringing Randa’s celebratory carne asada fries in tow. Felice Herrig gives assistant coach Sergio Pettis a friendship bracelet she made, but that’s the spirit of friendship doesn’t appear to be present in the practice room.
We cut to footage of a Team Pettis training session, and many of the women have complaints with the structure. Coach Pettis’s emphasis on technique (and the criticisms that accompany it) has frustrated a lot of the fighters. Jessica Penne dislikes the sop-and-go pace of practice and feels “over-coached.” Coach Pettis chalks this up to Penne being in a new place and not trusting the coaching staff. Later in the episode we see Felicer Herrig take charge of a team meeting where she and the other fighters air their grievances. Anthony Pettis feels a little blindsided by the whole thing. He’s open to altering the training, but he thought things were going great.
> Watch: Joanne Calderwood Practice Highlights
While the Team Pettis coaching staff isn’t too popular, neither is Team Melendez’s Heather Clark. Bec Rawlings thinks that Heather “whines too much,” and she’s starting to get on her nerves. Angela Hill predicts that the team will start to turn against Heather while Rose Namjunas takes the more diplomatic approach when she says, “I can see why somebody wouldn’t be keen to her.” Well, we’ll see how conciliatory Rose is feeling after the latest training session. As Heather and Rose are grappling during practice, they stumble off the mat and each one of them knock their heads. Heather earns a cut over her left eye, but she soon might earn the title persona non grata.
Watch: Emily Kagan Practice Highlights
Next we shift the focus to this week’s fight between Joanne Calderwood and Emily Kagan. Based out of Glasgow, Scotland, Joanne Calderwood got her start taking muay thai classes with her brother. From there, her love of martial arts continued to grow and now she finds herself with an undefeated record and a few fights away from a world championship. Coach Pettis calls her “quiet,” but knows that when she steps in the cage she can it a switch. Their gameplan for the fight is for Calderwood to keep her distance and makes this a striking affair.
> Watch: Joanne Calderwood Film Session
Back on the Team Melendez side, Emily Kagan channels her focus with yoga. A product of the Team Jackson/Winkeljohn camp, Kagan has wanted to fight Calderwood since both were under the Invicta banner. She sees the Scotswoman as an excellent stepping stone. If she can hand Calderwood the first loss of her career, it could catapult her profile. As far as the strategy to accomplish this is concerned, Emily believes her more aggressive style will be the difference maker. Coach Melendez wants her to close the distance, avoid the knees and take the fight to the ground. We’ll see if the plan works, because it’s fight time!
> Watch: Emily Kagan Film Session
ROUND ONE
The match opens with both fighters keeping distance and bouncing on their feet. Joanne kicks at different levels, but 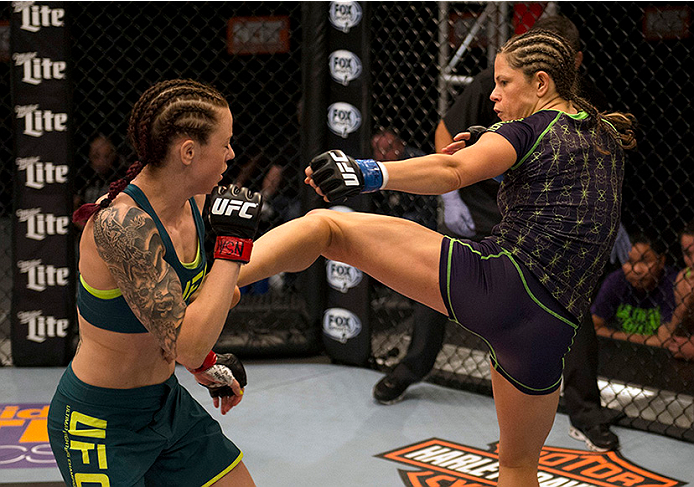 Emily’s footwork prevents and solid connections. Emily lands a stiff left hand from the southpaw stance, but can’t capitalize. The two exchange kicks and then Emily blasts Joanne with another hard left. This puts Emily into a groove and she starts to open up more. She throws a couple flurries, and Joanne clinches, knees and releases. Joanne scores another knee and follows up with some close range punches. Now it’s Emily’s turn to be on the defensive and she initiates the clinch. The two fight against the fence with Joanne’s knees making contact and Emily countering with some dirty boxing. They finally separate with 10 seconds to go, but the round ends before either opens up.
ROUND TWO 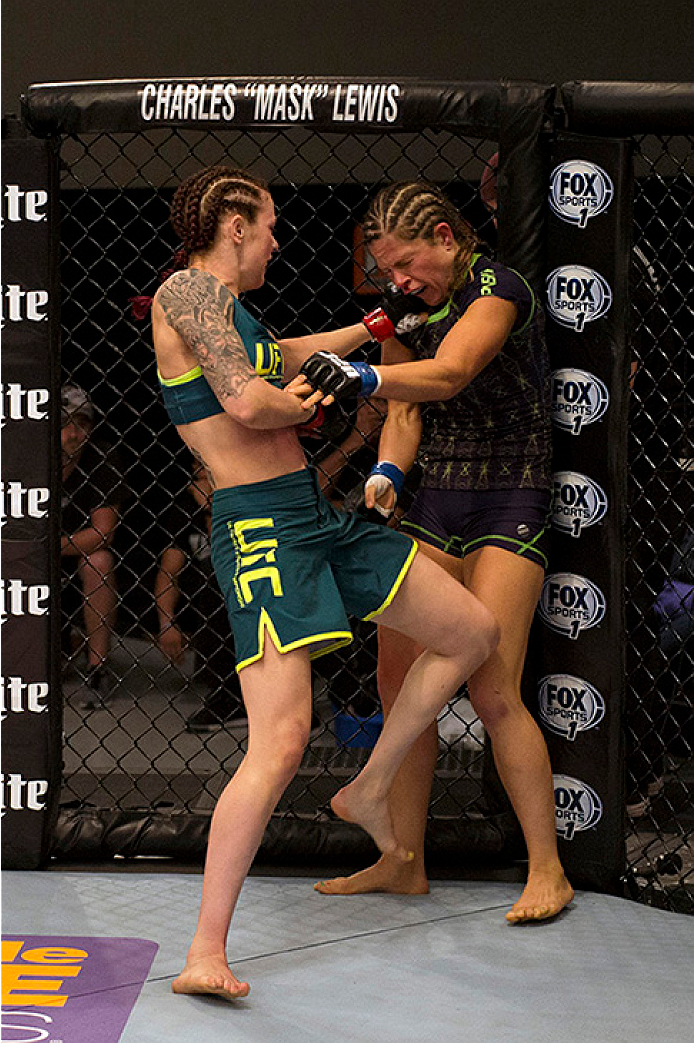 Joanne returns to a kick heavy attack while Emily tries to time them and counter punch. Another left hand from Emily finds its mark and Joanne returns to the clinch. Joanne takes the dominant position and then lands a takedown. She starts to attack from side control, but can’t hold her opponent down. As Emily scrambles up, she leaves her arm out and Joanne goes for kimura. Coach Melendez yells out, “You can squat her!” and that’s exactly what Emily does. She throws Joanne on her shoulders and slams her on the mat. Emily gets her arm free, but Joanne locks up a reverse triangle in the process. Emily spends the rest of the round trying to escape, but Joanne has it cinched up tight. The round ends with both fighters throwing ineffective body punches.
Both coaches expect the fight to go to a third round, but the judges have come to a decision. The scorecards read: 19-19, 20-18, 20-18. Joanne Calderwood advances to the second round via majority decision. Coach Pettis is pleased with the win, but feels that Joanne “couldn’t get her rhythm” and wishes she showed more aggression. Coach Melendez thinks the fight should have gone to a third round, but admits that a lot of the rounds were too close to call.
Team Pettis retains control and the next fight will be #4 fighter Jessica Penne facing off against Team Melendez’s #13 ranked Lisa Ellis. We close out with a sneak peek for next week? Will Bec Rawlings leave the show? Can Team Melendez break the losing streak? Where else will Felice Herrig decide to put her underwear? Find out this and more next week on The Ultimate Fighter!