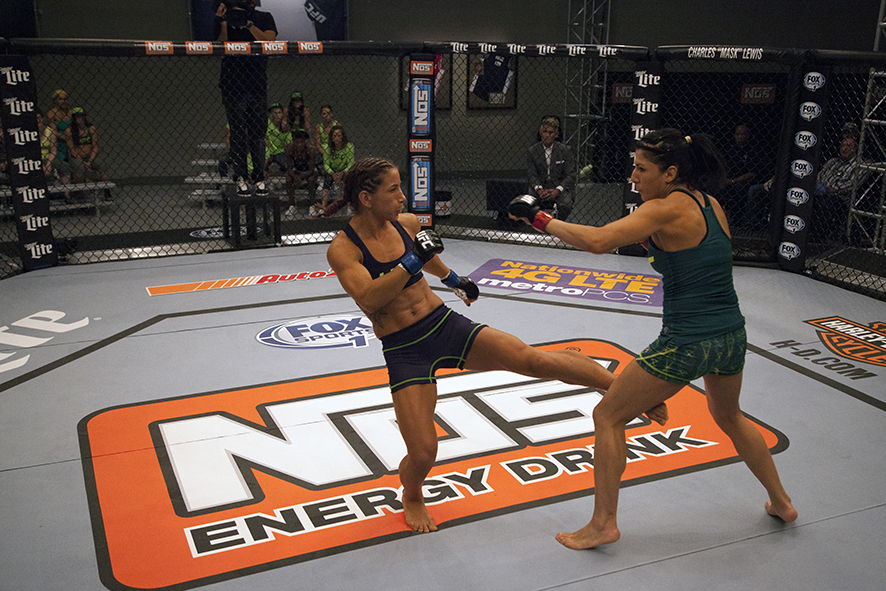 Upsets have been a part of The Ultimate Fighter since the very beginning.  If anybody told Chris Leben that he would be eliminated from the inaugural season, not once but twice, by far smaller and lesser-experienced opponents, he would have called you crazy on the spot.

The newest season of The Ultimate Fighter kicked off with a massive upset as No. 14 ranked Randa Markos -- a relative unknown in the strawweight field -- knocked off No. 3 seed Tecia Torres, who was a heavy favorite to win the entire series and claim the 115-pound women's title.  Now her run is over and like a good March Madness story, Markos is moving on in the tournament.

The win by Markos gave Team Pettis control of the fight selection, so they went with No. 2 overall seed Joanne Calderwood, who takes on No. 15 Emily Kagan on the latest episode airing Wednesday night on FOX Sports 1.

TOO MANY COOKS IN THE KITCHEN

Before the fight happens, the fighters get a little more acquainted with the coaches they'll be working with this season, but it doesn't take long before friction sets in on one of the teams.

The coaches on The Ultimate Fighter have all approached the show with different ideas in mind about how to work with the competitors on their respective teams.  With only six weeks to work together, many coaches have preferred a solid workout routine mixed with sparring and technique training to hopefully add on to a fighter's repertoire without totally trying to reinvent the wheel.

The other approach often comes a little more heavy-handed, with real adjustments being made to the fighter's style and technique ahead of a bout on the show.  There's no right or wrong answer necessarily, but many fighters during the more than 20-plus seasons on the show have definitely voiced their opinions about what they prefer.

The latest season is a true anomaly in this practice, however, because the 16 women on the show this year aren't rookies or novice fighters just hoping to make it to the UFC to kickstart their careers. These women are the absolute best of the best at 115 pounds and the rankings that put them from No. 1 to No. 16 are essentially how they stack up if the division was pushed into the UFC right now.

In other words, it's going to be a little more difficult to convince an undefeated fighter or a veteran with a title run under her belt to change something in her style or technique with only six weeks of total time on the show.  Let's also not forget that in six weeks, the winner will also compete on three occasions so time is really limited with learning versus simply just getting ready to fight.

It will be interesting to see how this plays out as the season continues as one head coach deals with a little bit of a revolt in the next episode.

The drama in the house also amps up this week as well -- as expected -- with at least one fighter rubbing their roommates raw with a little bit too much complaining and whining and it's starting to get on everyone's nerves.  If this is happening during the first week of filming, imagine what it's going to be like by week six!

GET TO KNOW YOUR ULTIMATE FIGHTERS

The matchup this week pits No. 2 ranked fighter Joanne Calderwood (most often times known as JoJo on the show) from Team Pettis against Emily Kagan out of Team Melendez.

Calderwood was another of the early favorites to make it to the finals this season and with good reason.  The Scottish born fighter is a fierce Muay Thai striker with an unblemished 8-0 record overall with four knockouts to her credit.  Calderwood might be one of the most soft-spoken individuals on the series, but don't let that fool you into believing she's anything but a predator in the cage.  Calderwood is probably the most dangerous striker at 115 pounds, with vicious kicks and knees and a style a bit reminiscent of Donald “Cowboy” Cerrone with the way she stalks an opponent down and annihilates them with her excellent stand-up.

Her opponent, Emily Kagan, comes into the fight with far less experience but a phenomenal team behind her.  Kagan trains out of the Team Jackson-Winkeljohn facility in New Mexico, where she learns from some of the best coaches in the business, including Greg Jackson, Mike Winkeljohn, Brandon Gibson, and other top names in the industry.  Of course, that doesn't even begin to cover the amount of top women who train at the gym.  Names such as Sarah Kaufman, Julie Kedzie, Holly Holm and Michelle Waterson all work out of the New Mexico-based facility, so Kagan has been prepared the right way, but she's got a tall mountain to climb facing Calderwood.

It's going to be hard to pick against Calderwood against most of the fighters in this house short of wrestling-heavy competitors such as Carla Esparza or maybe Randa Markos.  Calderwood has incredible hand and footwork, range and she hits like a truck with quite possibly the heaviest punches and kicks out of any woman on the show.  Kagan is ultra scrappy and she won't just fade away because she's facing the No. 2 seed, but she has to get inside early and try to rattle Calderwood with some dirty boxing or maybe even attempt a takedown or two to get in her head and possibly eliminate her kicks.

If those things don't happen, Kagan might be in for a long night against a fighter like Calderwood.

Just like the debut episode, anything can happen, and how shocking would it be to see the No. 15 seed pull off a win just a week after the No. 14 seed did the same thing.  The only way to know for sure is to tune into the next episode of The Ultimate Fighter this Wednesday night at 10pm ET on FOX Sports 1.