Read on to find out which two fighters will move on to The Ultimate Fighter Finale! 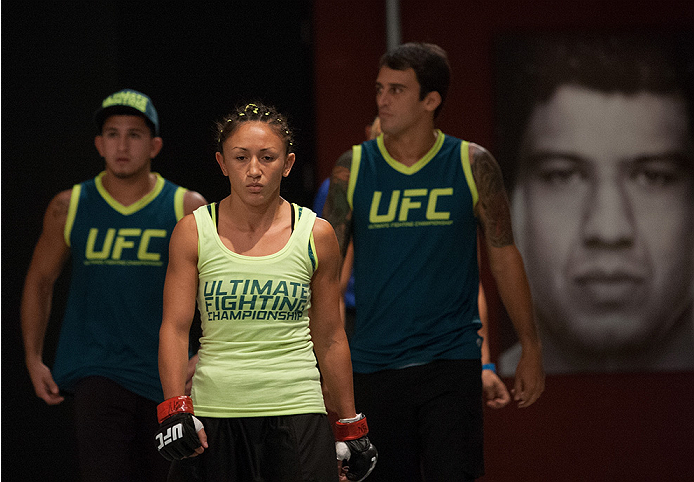 This week’s episode wastes no time getting right to the action. The first semifinal fight features #4 Jessica Penne facing off against #1 Carla Esparza. They are close friends who have trained together in the past, but they’ll have to fight one another to earn a shot at the strawweight championship. Carla admits that it’s hard to “let go” and go all out when you fight a friend. As for her game plan, she plans on scoring a couple takedowns and avoid Jessica’s submission game. Jessica wants to use her reach to avoid the wrestling, but feels comfortable working off her back.
> Watch: Jessica Penne Film Session | Jessica Penne Practice Highlights | Carla Esparza Film Session | Carla Esparza Practice Highlights

ROUND ONE
Carla strikes first. She’s the aggressor and lets her hand go. Jessica works her jab, but Carla slips and counters with a flurry of punches. Carla especially finds a home for her right hand and Jessica can’t find any defense. Jessica wants to use her straight punches, but Carla throws 2-3 punches and angles away from the counter attack. Carla finally shoots for her first takedown with two minutes to go. Jessica quickly rolls to her feet, but can’t change the momentum. Carla keeps connecting with her right hand and finishes another takedown with 20 seconds remaining. Carla can’t advance, the two stand back up, but the round ends before either can attack.
ROUND TWO
Jessica can’t find an answer for Carla’s right cross as the second round begins. Jessica doesn’t retreat her jab fast 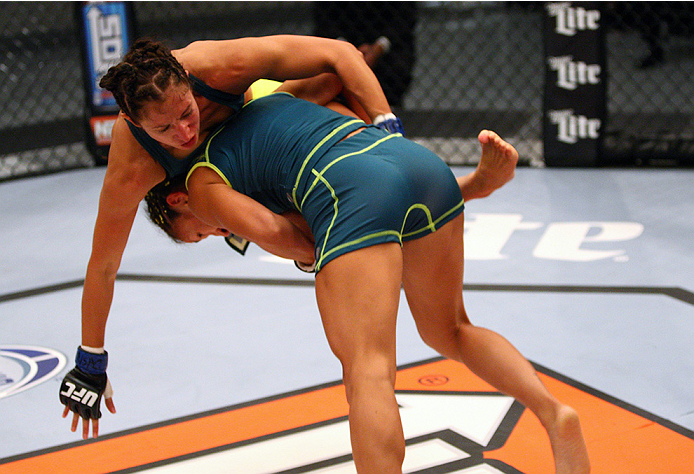 enough and Carla comes back with another flurry of punches. Carla throws more volume while Jessica sticks to single shots. Jessica starts to get her timing and lands some right hands of her own. Carla continues to beat her to the punch, though. Carla hits another takedown halfway through the round, but sticks her to strategy. She doesn’t want to mess with Jessica’s jiu jitsu and lets her stand up. Jessica pressures more, but gives up another takedown. Jessica works a high guard, but the action stalls. The ref stands them up and the Carla hits some more right hands until the round ends.
ROUND THREE
Jessica pushes forward and Carla’s cross keeps hitting the mark. Carla works different levels, but strictly maintains the attack with
her boxing. Jessica’s corner implores her to pick up the tempo, but she doesn’t respond. Carla’s punches start to lose their pop, but they keep connecting. The rest of the third round looks like the first two and Carla controls the exchanges until the end of the round.
The judges’ scorecards come back and they’re all 30-27 for Carla Esparza. Dana White calls it “an absolute clinic,” and praises her performance.
> Watch: Carla Esparza vs. Jessica Penne Fight Replay!
We move to the second fight between #7 Rose Namajunas and #14 Randa Markos.

ROUND ONE
Both fighters come out patient. They feel each other out and look for openings. Randa is the first to push the action and 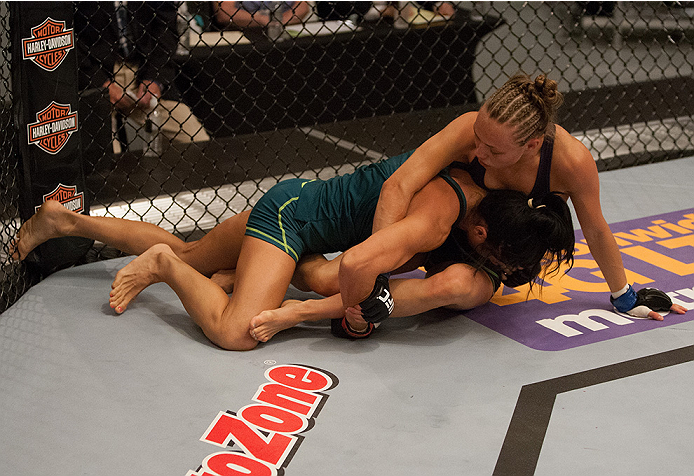 charges forward. She chases Rose the length of the cage and lands a couple hard shots. They clinch against the fence and Randa moves for an outside trip. Rose reverses and takes top position. Randa tries to roll her over, but only gets halfway. Randa locks on one of Rose’s legs and stretches her out. There’s a scramble, Randa moves back on top. Rose moves for a kimura and uses it to roll Randa over. She finishes the submission and secures the tapout with 2:16 to go.
> Watch: Rose Namajunas vs. Randa Markos Fight Replay
Rose and Carla faceoff in the cage and that wraps up the twentieth season of The Ultimate Fighter. Can Carla wrestle her way to victory? Does Rose get another submission win? Who will be the first ever 115-pound champion? Find out this and more this weekend at The Ultimate Fighter finale!