Read on to find out who won the quarterfinals bout between teammates Jessica Penne and Aisling Daly. 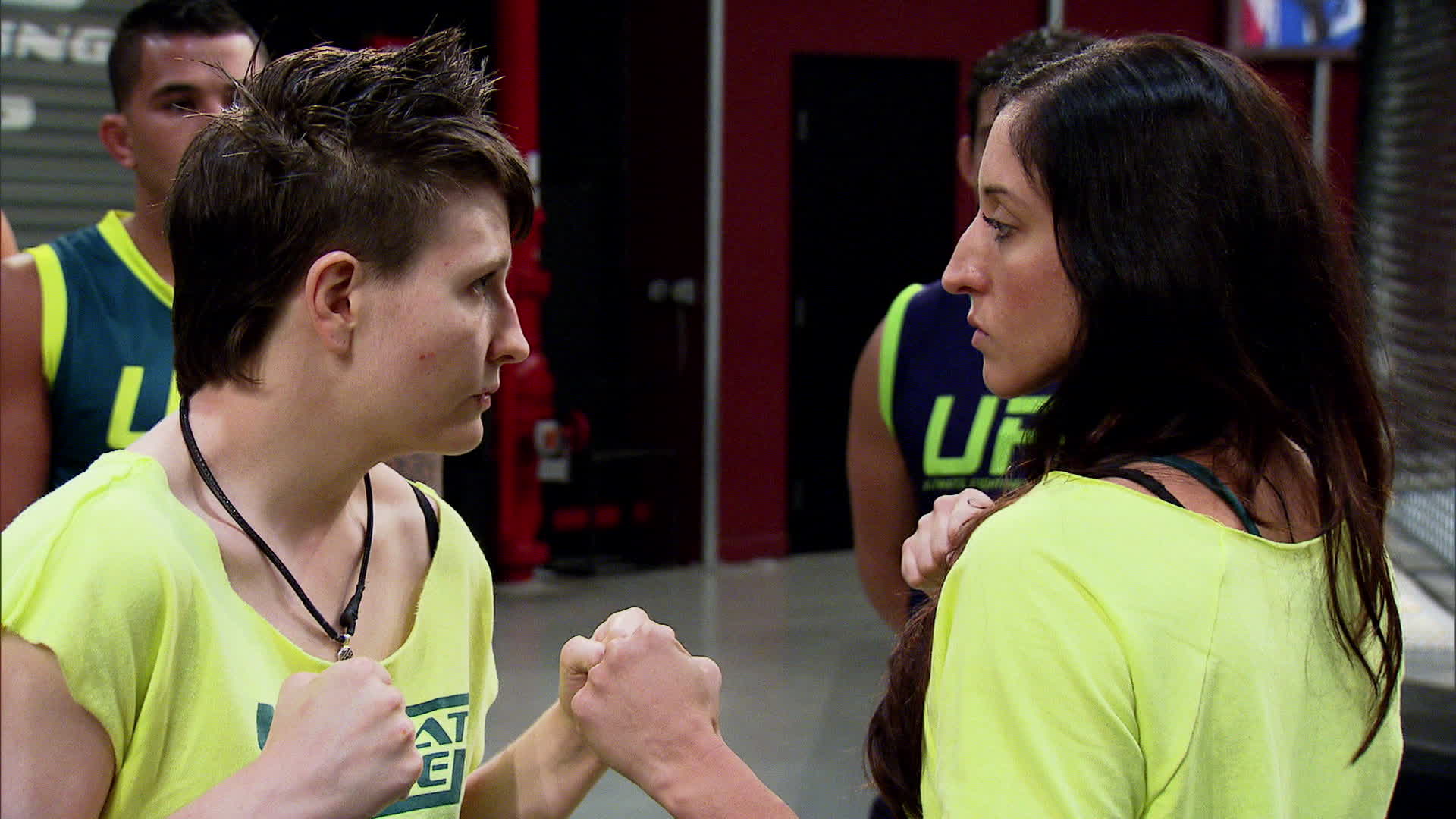 The quarterfinals continue as we this week’s episode showcases #4 Jessica Penne and #5 Aisling Daly. Ireland’s Daly has had a hard time adjusting to life in the house. She tells us that she hasn’t been “particularly outgoing or chatty.” She rationalizes this buy saying, “I’m here to do a job...not to make friends.” So far her strategy seems to be working. Her roommate Justine Kish says that the two have a “awkward relationship” and that, “I’m pretty sure she hates me”
Aisling’s opponent Jessica Penne feels similarly about the house dynamic. She considers herself a loner and wants to focus on her fight. She has no interest in the house dynamics or other distractions. As far as the fight is concerned, Jessica says that she doesn’t like to step into fights with a game plan. This time around, that strategy is even easier. Aisling has an unorthodox fight style that makes it even more difficult. If we can glean anything from her training montage, it looks like she plans on using the clinch and attacking with knees.
> Watch: Aisling Daly Practice Highlights | Aisling Daly Film Session | Jessica Penne Practice Highlights | Jessica Penne Film Session | Weigh-in Highlights
After a trip to Harley Davidson boot camp, we’re back at Team Pettis training session where Aisling feels further isolated. She calls the team “completely splintered” and thinks that the coaches have a better relationship with Jessica. She receives a much needed morale boost when the “Notorious” Conor McGregor walks through the door. One of Aisling’s teammates back in Ireland, he made a pit stop while on a press tour for his fight against Dustin Poirier. We’ll see if his visit helps Aisling conquer all her emotions because it’s fight time!

ROUND ONE
The two meet each other in the center of the Octagon and let the leather fly. In the midst of the punches, there’s an eye poke. After the restart, Jessica works her jab while 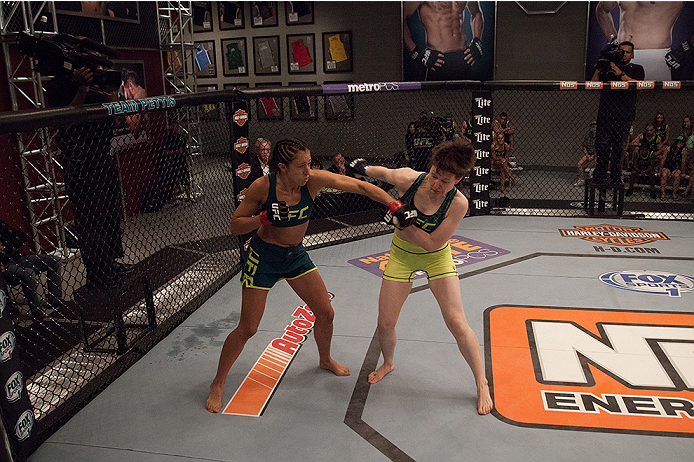 Aisling switches stances trying to find the right angle to attack. As Aisling punches, Jessica slips and moves for the takedown. They fight for position on the fence and each throws short punches. Jessica lands a couple knees, but Aisling finds success with her dirty boxing. They break with 1:40 remaining and Jessica continues to pump her jab. She shoots in for another takedown and Aisling defends. They find themselves back against the cage and fight in the clinch. They break apart with 20 seconds to go. Jessica flurries, Aisling counters with a right hand and the round ends.
ROUND TWO
Aisling continues to switch stances and connects with an overhand right. She follows up with a left hook and stings Jessica. Penne has enough with the striking exchanges and moves in for another takedown. Aisling defends and puts Jessica on the mat. She doesn’t want to go on the ground with the Brazilian Jiu-Jitsu brown belt, so she lets her get back to her feet. The two are back standing and Jessica starts to find her range. She connects with her straight punches and moves out of the way to avoid the counter attacks. With a minute to go, Jessica hits an outside trip and moves straight to mount. A few punches cause Aisling to give up her back and Jessica moves for the rear naked choke. The round ends 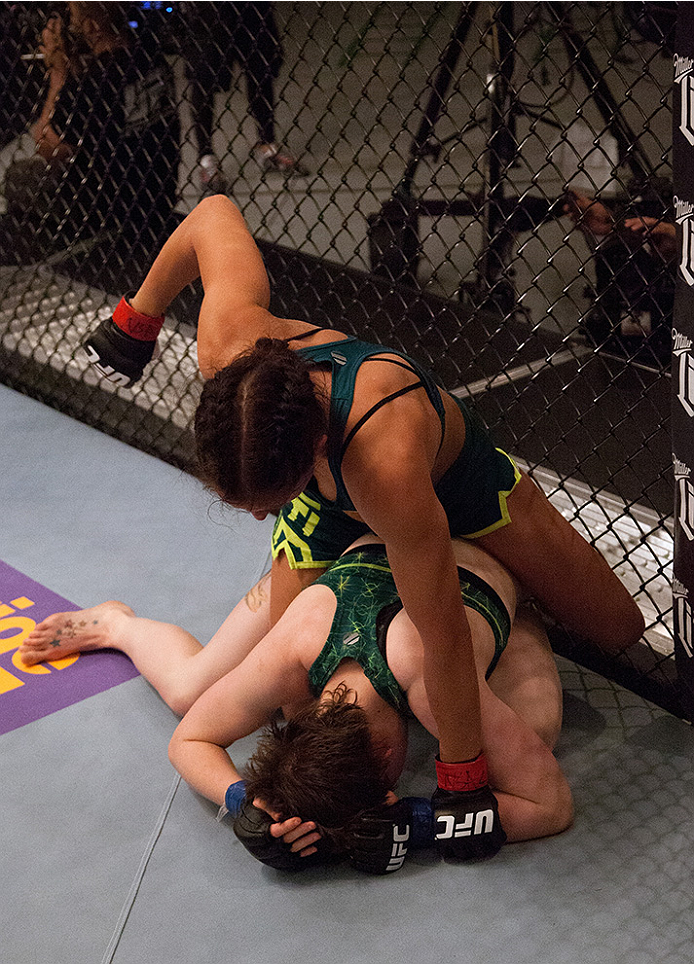 before she can finish.
The judges have it tied on the scorecards. We’re headed to sudden victory!
ROUND THREE
Jessica goes back to her jab and Aisling walks right through it. She secures her under-hooks and tries to wrestle Jessica against the fence. Jessica counters with another trip and takes Aisling’s back. She’s too high, though, and slips off. She throws up a triangle attempt, a scramble ensues and Jessica winds up with Aisling in a beatdown position. Jessica ties a few more submission attempts, but Aising defends and makes it back to her feet. With only 42 seconds to go, Aisling tries to even the scorecards up with a takedown of her own. She grabs a waistlock, but can’t finish before the round ends.
> Watch: Jessica Penne vs. Aisling Daly Fight Replay!
The judges’ decision comes back and they give it to Jessica Penne. We wrap up with a sneak peek into next week’s episode. Can Carla prove that she deserves the #1 seed against Tecia Torres? Does Joanne Calderwood finish Rose Namajunas? Will Team Pettis continue its disintegration? Find out this and more next week on The Ultimate Fighter!