So start off by letting us know what it felt like when Anthony Pettis asked you to be an assistant coach?
It was awesome. When it was brought to my attention that I was going to be an assistant coach, I thought it was an awesome opportunity and great learning experience. I’ve never done anything like this. I remember watching the show and now I’m coaching it. I love giving the knowledge I have, to other people, especially if I’m helping them further their career. One of these girls is going to be champion after this, so the opportunity to help with that is awesome. When he asked me, I was like, ‘heck yea, let’s do it.’ *laughs*
You mentioned watching the show, what is your favorite season?
I haven’t been keeping up with them lately because I’ve been training so much, so I’d have to say one of the earlier seasons because I remember watching the show and then, during the commercials, me and my 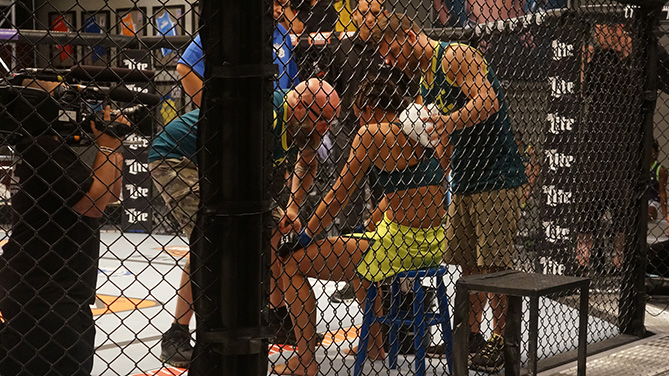 brother would be wrestling on the couches, on the bed, back and forth until it came back on. Now, I don’t have TV or Cable and all I do it train, so I don’t get to keep up with it as much as I’d like to. So it’d have to be one of those first seasons with Chuck Liddell, Forrest Griffin, and all those old school guys.
So what have you been helping the contestants with during your time as coach?
I’ve been helping the girls mostly with wrestling and ground game. As bad as it sounds, I’m like their size; my weight class is only 10 pounds heavier than what they are, so I’m the best training partner for them coach-wise. I’m also helping them with game planning and keeping them uplifted with good, positive vibes.
What part of your game do you think they can implement or take with them?
Well, my game is all over the place. I love standing up, wrestling, jiu-jitsu. So I think the biggest thing they are taking away from me is believing in themselves and sticking to their game plan. Because their coaches are different than what they’re used to and no one really know what they were being taught before they got to the show. So I think going in there, being confident, sticking to the game plan, and really listening to the corner is kind of what I’ve been telling them the whole time.
So who are some fighters who have stood out to you so far?
They are all different in their own ways. They’re all unique. I like them all, they all have great attitudes. We had a rough patch for a while where the girls started fighting each other. They did was to be expected, separate, get in their own cliques. But I understand that, you don’t want to be hanging out with the person you’re going to fight – at least I wouldn’t want to. Just dealing with that process, having that over with, and now everyone is coming in and having fun, and enjoying the sport.
What kind of advice did you give them for dealing with so many personalities? 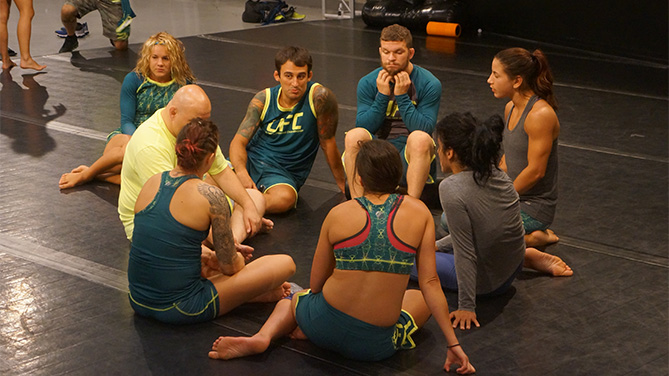 Just go with it and learn from this experience. I don’t foresee them going and living with their competition anytime soon. So, it’s just an experience. Be respectful, do your thing, and have fun with the sport. Learn to enjoy the process. Somebody told me right before my very first weigh-in, ‘enjoy this, it’s going to pass by before you know it.’ And it did! I was so focused on standing on the X, and weigh-in, and being on mark. It happened so fast and I was thinking ‘man, I want to do that again!’ So my biggest advice is to enjoy it and be happy with what you’re doing, especially when you’re around opponents. There’s no need to put on this front like some people do and just be mean and stuff. Just do your thing, let them do their thing and what is going to happen is going to happen.
Right, you’re going to have to fight anyway…
Absolutely! That’s another big thing! Some of these girls are getting super nervous before their fight, even when they come into the gym to train. But it’s like, hey, you know you’re going to fight, might as well go in there, give it all you got, and get the win. If you try to win every situation, try to win all the exchanges, you’re going to win the fight. So don’t worry about winning fight, worry about winning positions.
You fight at flyweight, which is a pretty tough weight to make for a lot of people. Talk a little bit about the importance of nutrition. Because, I mean, the girls are in a house with little restriction, there is liquor available, and they could eat burgers every day if they wanted to.
Nutrition for me is huge. Just because 125 is no joke, and I take my hat off to all the guys who do make 125. It’s never an easy process. You really have to dedicate yourself to being smart with what you eat, and when you eat. But everyone is different! I’ve got to have a little cheat here and there just to keep sane. It’s nothing bad because I’m sure dedicated to this. It might be even harder outside the house because your buddies are doing stuff, going out to watching the game, to the bar to watch the fights. Here, they know they are in the house for a certain reason. As long as they keep their eye on the prize and what they are here for, it shouldn’t be that tempting. But when you have your boys out in the real world like ‘hey let’s go out.’ You want to go out because you’ve been in a training camp for however many weeks and you want to take your mind off it. But it all comes down to how bad you want it.
How can they parlay this spotlight into a successful career?
They have to take advantage of every situation. This is big. It’s on TV, everyone is going to be watching, and it’s the first time in history the entire cast is all females. They have to make it bigger than what it is. When they do interviews, photoshoots, anything like that, just blow it up and take advantage of every opportunity. That will definitely make them bigger than they can even imagine. They’re all here for a reason. Stay dedicated and win fights because no one is going to remember the loser.
So you’ve won three of your last four…
Yea, or four of four *laughs* (Ortiz lost a split decision to John Moraga at Fight Night Atlanta)
Well what’s next for you?
During my fight I was caught in an armbar, and then I had the show, so I already planned on taking a break since I had fought four times over the last 10 months. And I’m not complaining, that’s my style, I stay in 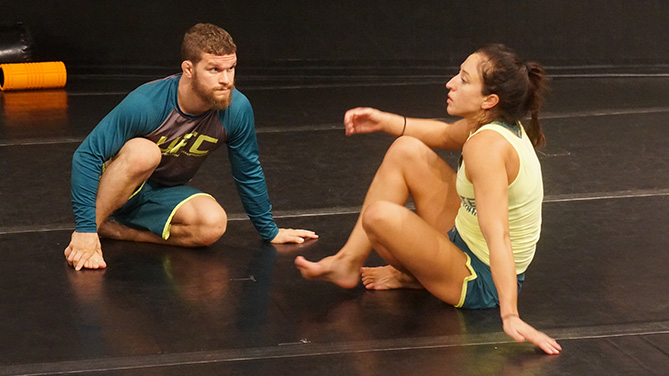 shape and love to fight but I know I needed a little bit of a break. Getting in that armbar didn’t do much damage, but slowed me down and allowed me to take some time, rest, and give something back to these girls on the show. I expect a very elite opponent for this next fight and said I want a title shot after I whoop the next guy. I think I deserve it – I’ve fought all tough guys. Ray Borg was undefeated, Justin Scoggins, super tough kid and undefeated as well. Those are two undefeated guys I’ve just fought. I went to Brazil for my very first fight in the UFC and beat a super tough guy there. I’ve had nothing but tough fights and I’ve won. I’m coming after it.
Any names you want to through out there?
No! The last time I did that, the guy got a title shot! I’ll call out myself if it gets me a title shot. Because the only person I have to be better than is myself. I go out there, and I put these guys on a pedestal. When I fought Moraga, I was thinking, ‘man this guy is coming off a title shot, why did they put me with him?’ I kind of had self-doubt. But after I controlled the first round, I was like whoa. So winning, but losing, that fight opened my eyes. I’m here and ready to make that run for the belt. I’ll fight anybody who will get me one step closer to the belt.
MORE: Coach's Corner - Urijah Faber | Coach's Corner - Conor McGregor | The Ultimate Fighter Episode 9 Recap | The Ultimate Fighter: Sydney Leroux and Megan Rapinoe Q&A
Shortly after this interview, the UFC announced that Ortiz will take on flyweight contender Joseph Benavidez at Fight Night Austin. Catch him in action this weekend on FOX Sports 1!