Read on for a preview of episode three of The Ultimate Fighter Brazil 4...available exclusively on UFC FIGHT PASS

This season marks the first time the fighters from Brazil have traveled to Las Vegas, where they will live and train for six weeks with the tournament eventually dwindling down to four competitors who will face off for a six-figure contract with the UFC in the lightweight and bantamweight divisions. 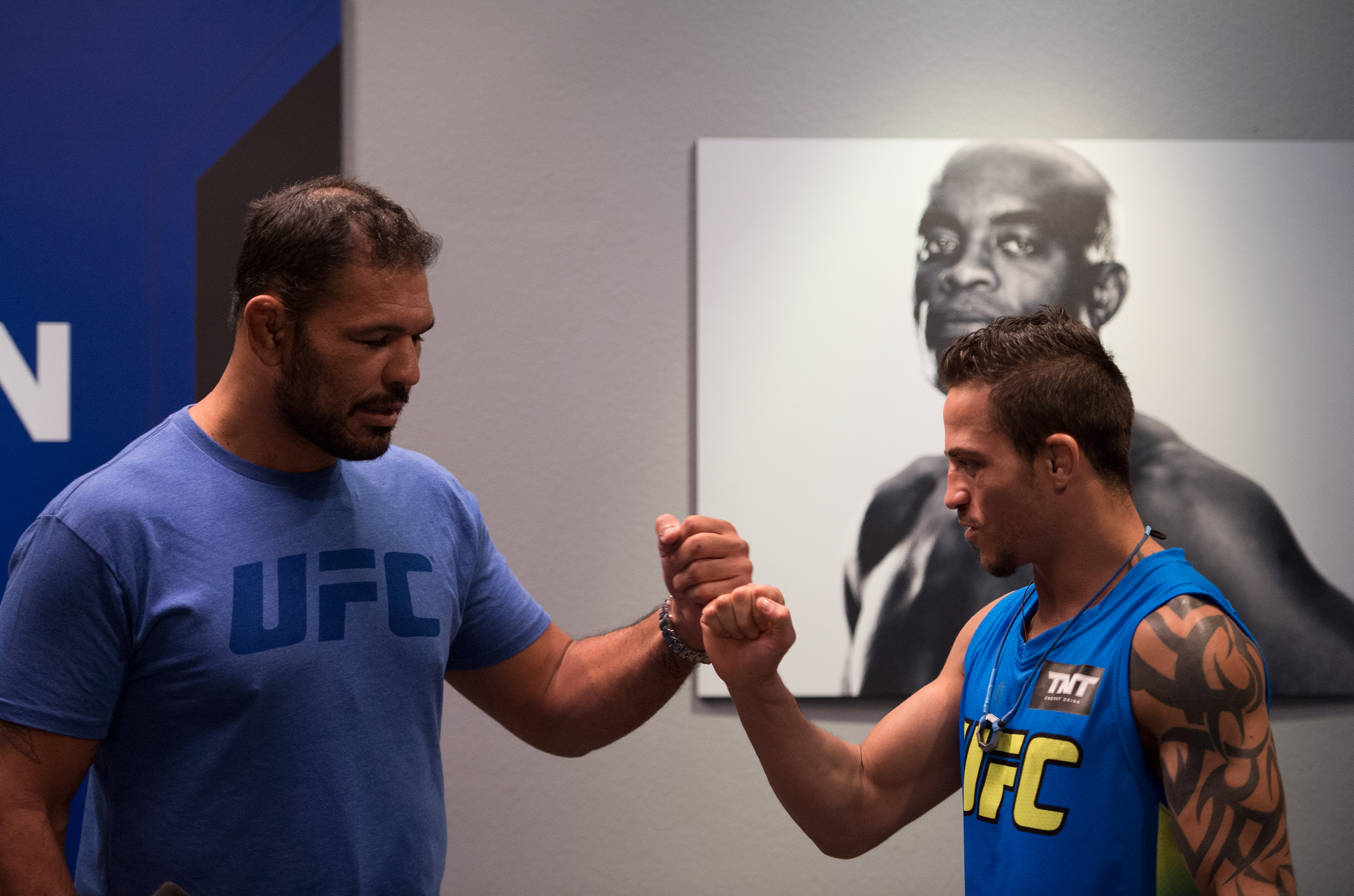 The coaches selected their teams last week, but this week will also see a huge upheaval amongst everybody involved with the show as a piece of news rocks The Ultimate Fighter Brazil in the latest episode.

It's been well documented since February that future UFC Hall of Famer Anderson Silva tested positive for banned substances in the lead up to his fight against Nick Diaz at UFC 183 as well as after the bout. The original plan when Silva received the news was to have him remain as coach on the series, but the Nevada State Athletic Commission intervened and ultimately he was pulled from the show and replaced by “Minotauro” Nogueira and his brother Rogerio Nogueira.

Following months of speculation about how the entire situation played out when it happened, this week's episode of The Ultimate Fighter Brazil will feature the entire ordeal as Silva receives the initial call that he failed a drug test and his immediate reaction to the news.

"I've never taken any of that. Are you crazy?" Silva said during the latest episode. 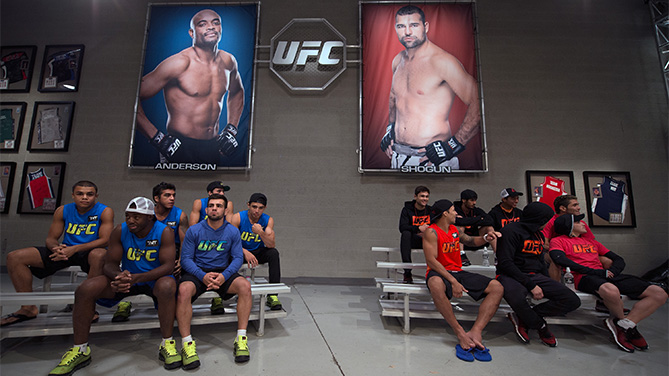 If the must-see moment between the coaches on the previous season of The Ultimate Fighter Brazil was watching Wanderlei Silva and Chael Sonnen explode into a fight just before their fighters weighed in, then this year the time to watch is definitely the upcoming episode, where Silva finds out about his test results and the reaction his team faces just days after celebrating him as their coach.

Silva's candid reaction when finding out about the test results to the moment he tells his team the news to facing the music based on the judgment of the commission is definitely a riveting set of scenes this week, so don't miss a moment of it on The Ultimate Fighter Brazil 4.

One of the most popular segments added to The Ultimate Fighter Brazil last year was the Octagon Girl competition that ran alongside the fighters facing off against each other in the cage. The idea is simple - a slew of potential Octagon Girls all try out for a chance to join the UFC, and just like the team competition, the ladies are put to the test throughout the season until the numbers are whittled down to just a few.  At that point, fans are able to vote on which Octagon Girl deserves the opportunity to walk around the Octagon at The Ultimate Fighter Brazil 4 finale later this year.

The upcoming episode introduces the latest Octagon Girl hopefuls while the two teams involved on the series this year enjoy some downtime at the Red Rock Casino in Las Vegas.

Combining 16 fighters, a bunch of gorgeous women, games, drinking and food pretty much guarantees that something interesting is bound to happen.  Can the fighters keep their focus in the face of this latest potential distraction?

With the first fight taking place before the end of this episode, they better hope so!

The fighters will also have a chance to win additional prizes this year based on a series of games that will take place between Team Shogun and Team Nogueira.  The competition kicks off this week and just like all the previous games that have been played, the teams must work together to come away victorious or risk watching the other guys enjoy the spoils of war while they are still stuck in a house every hour of every day until training comes back around again.

These team competitions are not only a fun way to see how the guys can work together, but the winners certainly do enjoy bragging rights and usually an enjoyable prize as a result of their victory.

The latest installment is no different. 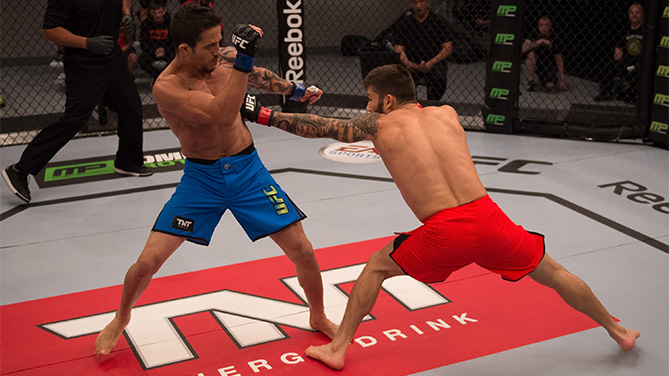 The fight this week matches up Matheus Nicolau against Reginaldo Vieira in a fight between two of the most experienced members of the show this season.

Nicolau and Vieira both made impressive debuts to get into the house with each wrapping up a submission early in the first round of their respective matchups. The fight between these two might be as close an opening round matchup as we've had on The Ultimate Fighter in recent years.

Nicolau comes out of the Nova Uniao camp in Brazil, well-known for producing fighters such as Jose Aldo and Renan Barao, so there's definitely no shortage of great people to train with every day when he goes to the gym.  Nicolau's only loss comes to former UFC fighter and Ultimate Fighter veteran Pedro Nobre, but otherwise he's been unbeatable, racking up 10 wins with a slew of different finishes along the way.

Vieira brings a veteran's spirit into this fight as well, with a nasty submission arsenal at his disposal, including a vicious guillotine choke that he's used to put away six opponents in the past, not to mention his opening round matchup to get into the house this season. Vieira has no fear of going for the submission and giving everything he's got to lock it up while trying to get the finish.

Vieira has to be careful facing a young gun like Nicolau, however, as he is equally dangerous on the mat and has good conditioning as well.  If Vieira can't lock up a submission in the first round, will he possibly get frustrated or even gassed because he just fought a few days earlier to get into the house? These opening bouts are always tough because the time between the first fight and second fight is usually a matter of hours and not weeks, so conditioning and being fully prepared before really getting any kind of coaching is key.

Who comes out on top? How will the fighters react to Anderson Silva's news? Find out by watching this week's brand new episode of The Ultimate Fighter Brazil 4 exclusively on UFC Fight Pass.