Read on for a preview of episode one of The Ultimate Fighter Brazil 4...available exclusively on UFC FIGHT PASS 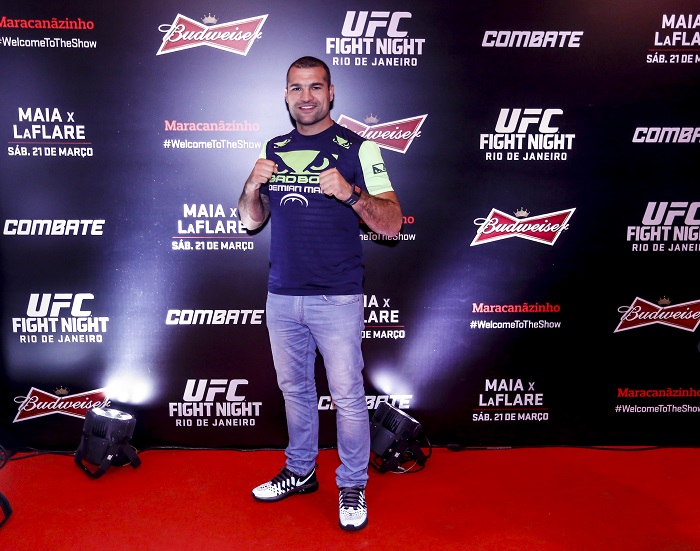 The Ultimate Fighter Brazil 4 will debut exclusively on UFC Fight Pass in the United States this Monday with a cast full of lightweights and bantamweights all clamoring for a shot at a contract and future inside the Octagon.

While past seasons of the show have actually taken place in Brazil, for the first time ever, the cast and coaches will relocate to the United States, where they will film the show at The Ultimate Fighter gym in Las Vegas, where all other previous seasons of the regular series have taken place.

The show also underwent an upheaval just days after filming began when former UFC middleweight champion Anderson Silva was forced to leave the series, being replaced by his good friend and fellow coach Antonio Rodrigo Nogueira. Viewers will have to stay tuned to see how things played out in this situation, as “The Spider” will be on hand for the premiere episode this Monday.

Nogueira is no stranger to The Ultimate Fighter considering this will be his third stint as a coach on the show after working opposite Frank Mir in season 8 as well as working on The Ultimate Fighter Brazil season 2 when he coached against current interim UFC heavyweight champion Fabricio Werdum.

The good news for the fighters on Team Nogueira - he has a lot of success as a coach on this show. In the two seasons he's coached The Ultimate Fighter, Team Nogueira's fighters have won every single finale they've been a part of. Efrain Escudero and Ryan Bader both won in their respective divisions on season eight, as did Leonardo Santos, who put the stamp on his season with a win on The Ultimate Fighter Brazil season 2.

This season, Nogueira will coach against former UFC light heavyweight champion Mauricio “Shogun” Rua, who coaches on the show for the first time. Not to worry about experience, however, because Rua is a legend in the sport and he's worked with a laundry list of top fighters and coaches over the years to prepare him for what's ahead of him on the show.

As previously stated, there will be two weight classes on the show, with the 155-pound and 135-pound divisions competing. 32 fighters in total have been selected, which means the debut episode this Monday will feature an onslaught of elimination fights as the competitors battle it out to determine the final 16 who will actually join the show for the season.

In the bantamweight division there are a few notable names to keep an eye on during the elimination round.

Dileno Lopes (17-1) has to be considered an early favorite going into the season after not only amassing an impressive record with a reputation built on being a devastating finisher, but he also has some Ultimate Fighter experience under his belt.

Lopes desperately wanted to try out and make the reality show even if his division wasn't available, so while he naturally competes at flyweight, he went up to 145 pounds for a chance to compete on The Ultimate Fighter Brazil 1. Unfortunately, Lopes fell short in the elimination round, falling to eventual series champion Rony Jason, but not without rattling his fellow Brazilian with an early shot that nearly scored him a finish. Now Lopes is back as a bantamweight, where he will face fighters much more in line with his size as he looks to not only make it onto the show, but go deep in the competition.

Bruno Gustavo (8-2) will have at least one familiar face awaiting him on the show because in his time training outside of The Ultimate Fighter he's actually a member of Team Nogueira and learns under the legendary heavyweight any time he's preparing for a fight. If he makes the show, Gustavo will certainly hope to land on his coach's team for his best chance to win.

Leandro Higo (13-2) is not only looking to win when he appears on the show, but he's just hoping to stay busy while participating as part of the reality series. Higo has actually been out of action since 2013 due to a long string of problems finding opponents or having potential foes missing weight when they are scheduled to face him.

Higo thought he may have finally found a solution to the problem when he signed with RFA, a regional promotion that routinely produces fighters that make it to the UFC, but he never got the chance to fight for them before he joined the new season of the show.

Another name to watch is Matheus Nicolau, who holds a 10-1-1 record overall and trains out of the Nova Uniao camp in Brazil. On any given day, Nicolau is working with coaches like Andre Pederneiras as well as fighters such as UFC featherweight king Jose Aldo and former bantamweight champion Renan Barao.

Considering he's competing at 135 pounds on the show, Nicolau has the right people surrounding him to ensure he's prepared for whoever he faces this season.

Moving to the lightweight division, Adilson Fernandes (11-4) is one of the more experienced competitors to watch. Fernandes generally fights at featherweight, but obviously with the potential to cut weight two or three times in a season, he's not going to lose much by going up to 155 pounds for the show.

Fernandes trains alongside former Ultimate Fighter Brazil champion Rony Jason, and while he hasn’t experienced losing very often in his career, one of the people who holds a win over him is Warlley Alves - the winner from The Ultimate Fighter Brazil season 3, who also happens to be a massive welterweight, so Fernandes gets bonus points for the toughness to even accept that fight in the first place.

Peru will be represented on this season of the show, as Fernando Bruno (14-2) makes his first appearance on the show. Bruno has won his last four fights in a row heading into the series and also trains out of Nova Uniao in Brazil.

Fighting out of Argentina, Nazareno Malegarie will definitely be a favorite by many to win the entire show with an impressive 27-3 record. Malegarie was a two-time Judo champion before moving to Brazil in 2001, where he later earned his black belt in Brazilian Jiu-Jitsu. Malegarie has fought some very tough lightweights throughout his career and also trains alongside UFC featherweight Thiago Tavares.

Finally, don't be shocked when you see the name Erick Silva pop on your screen this year as part of The Ultimate Fighter Brazil cast. Silva is a solid 15-4 prospect out of Brazil, but he's not the welterweight knockout artist already well-known in the UFC. There's a good chance this Silva will end up with a nickname if he makes it to the UFC to lessen the confusion from the “other” Erick Silva already competing in the Octagon.

The full roster of fighters for the upcoming season of The Ultimate Fighter Brazil 4 is listed below:

Don't forget that The Ultimate Fighter Brazil 4 kicks off this Monday, exclusively on UFC FIGHT PASS, with the entire series airing on the UFC's digital online streaming network.