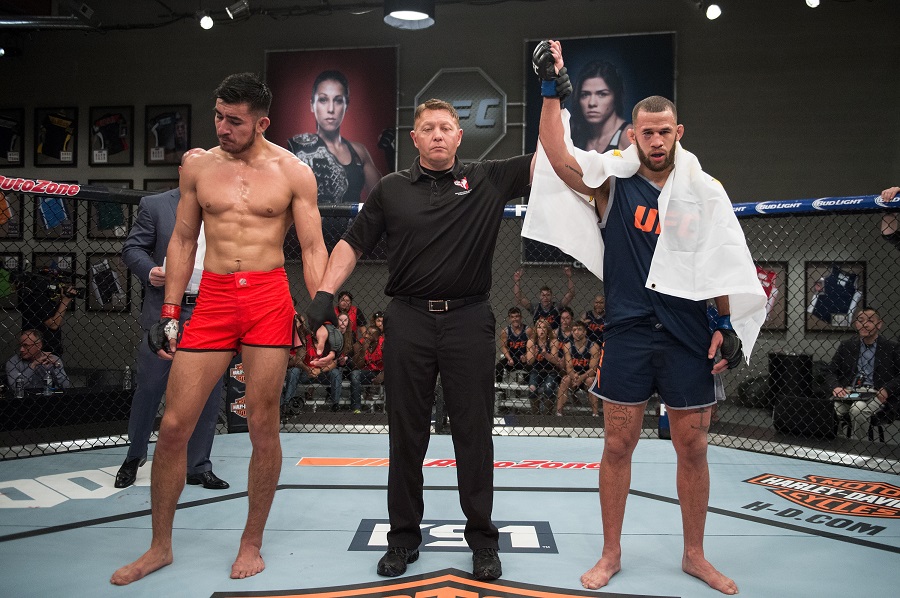 Man, Elias is one tough dude.
I felt great and confident going into the fight but once we were in the cage Elias’ length and awkwardness was tough to deal with. I didn’t feel like I could get any of my striking off. I pressured him back and ate a straight left as I came in for a single leg. It didn’t really stun me but my eye immediately started to swell. He ended up reversing my take down and ended up on top. He threw a hard elbow as soon as I locked my legs around him. He surprised me by how much power he can generate from a short distance. I threw up an armbar right away and he stood up as I tried with all my power to finish it. His arm was popping and he didn’t care. He spiked me down on the top of my head a couple times before throwing me into the cage. I transitioned to the leg lock from there and tried to secure a heel hook. He hit me with a sharp elbow as my head was on the mat. I was rocked and luckily he started elbowing my body. I felt like I couldn’t move for a few seconds.
Interact with Eric!

I snapped back into it and in a scramble I was able to take his back and work for the choke. The round ended with me on his back trying to look for the finish.
The second round started and I was able to close the distance and take him down again. I was able to take his back and was working for the choke/armbar. His length was giving me trouble on the ground and he wouldn’t quit. I know a lot of people would have just given up their neck in that situation. I controlled the whole fight but I was unable to get the finish. I'm not sure if it was nerves or what but I felt like I really dropped the ball in this fight. I have faced a lot higher competition in my career and I should have been able to get the finish.

Immediately after the fight I was very disappointed. I started crying right away once I returned to the locker room. It was hard to feel happy about winning with such a bad performance. Dana wasn’t happy with it. I’ve always been told winning is the only thing that matters but really now at this stage winning matters but you also have to be entertaining. My fight might speak to some people and I’m sure a lot of people are going to trash it. I tried my hardest to get the finish and it didn’t come. All I can do now is focus on the next fight and put on a better show. It’s the first time in my career where a win felt like a loss. I’m going to take a day off and get right back into training.