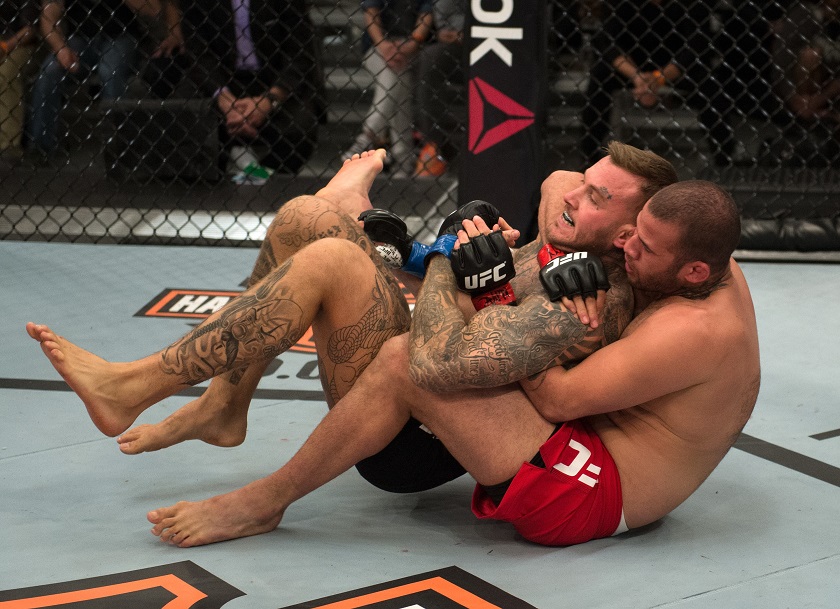 So far Team Claudia is 2-for-2 with finishes in both fights so far. I can say the vibe on the team is very happy and confident. After Tatiana’s fight we instilled a new rule: when you fight and win you have to dance with one of the coaches. It’s a tradition in Brazil. So as soon as we got back to the locker, Tatiana cut a rug.
The next fight chosen was Andrew Sanchez vs. Myron Dennis. I really wanted to fight next because I was riding the momentum of our two wins and I had a very short fight to get in the house. I had finally gotten over my cold and I was itching to get back in there. We huddled up and decided that Andrew was going to fight next. He wanted to take out Myron since the word around the campfire was his weight was a little high and we didn’t want to give him time to get in shape.

Plus their styles matchup perfectly. Andrew is a high-level grappler. I had heard of him because we both are middleweight prospects and I’m just a big fight nerd. I’m always scouting potential opponents so I was very familiar with him. Here we are now on the same team and have been training together exclusively for the past few weeks, since Cory had just fought and Adbel had an elbow injury.

We’re feeling pretty unstoppable. We feel like it’s grapplers vs. strikers and we can win every match. I’m not sure how the other team is feeling but being down 2-0 and not knowing who’s going to get picked next has to be stressful. Also Joanna is not happy at all. She’s very competitive and it seems like after the first and second win she’s gotten more hostile towards Claudia and her team as well.

Two people have won by grappling and I see us winning more via grappling. We have some high-level grapplers on our team. I started with BJJ and have won six straight fights in the first round via submission or TKO on the ground. Andrew, Tatiana and I are probably the most decorated grapplers on this season. But we a lot of great grapplers and well-rounded fighters on our team as well and I believe that’s why Claudia picked us.

Andrew’s Credentials speak for themselves. He is a four-time NCAA All-American, BJJ brown belt under Marcelo Garcia and he is an IBJJF World Champion. Plus the guy can strike. Myron seems well rounded but edging more towards the standup game. He does have a couple submissions to his credit. He’s competed in Glory and has faced some veterans of the sport. He has a lot of experience with a record of 11-4. This is one of the biggest male fights for both teams in my opinion. Myron has dynamite in his hands and heavy leg kicks and Andrew can strike and grapple with the best of them.