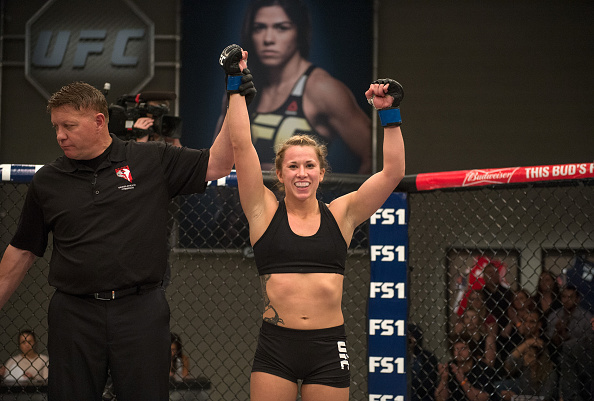 The momentum has been building for Team Claudia since our initial victory and it gave our team an aura of confidence and sense of upcoming success. How the training would be structured was on all of our minds coming into the house and I feel everyone on the blue team had an advantage throughout the show because our practices were simple and effective.

The coaching staff of Team Claudia didn't try to teach new techniques as much. They focused more on individual preparation and strengthened what we did well with while practicing minor corrections to our weaknesses. There was a very positive energy in the room and training at times was even fun, but always focused on the goal: to win the show. Joanna's team initially focused on similar training methods. However, once a few fights were lost, Joanna began to demand more from the athletes and push them hard in training. This created a tension that was evident in the competition and I feel gave us an edge when it came time to fight.

The success we were having early on in the show was a combined effort from the team and the coaches. We came together quickly and embraced the feeling of a "team", although we all knew that in the end only one person would be a champion from the women and the men. Surprisingly, we were able to come together and focus on helping every member improve and tried to take as much from this experience as possible.
Get social with Amanda!

I was fairly certain that Andrew would beat Myron in this competition, and I feel that Myron gave Andrew an extra edge by constantly joking and being too laid back. Although that is Myron's true personality, I believe at times it is reducing the stress of his opponent and making the psychological aspect of the fight game easier to deal with. Andrew went into the fight focused and ready to prove he belonged at the next stage of the competition and felt that Myron was taking it too lightly. Plus, Andrew had asked for this match up.

This house had forced us to deal with the stress of fighting in a different way, normally we are given multiple weeks to focus our mind. In this circumstance we could be cooking breakfast next to our opponent or having conversations with them the night before finding out that in 2-4 days only one of us moves on in the competition. I believe all athletes would agree that on the day of your competition that the mind is the biggest factor. And in this house it was an added stress that none of us had endured in the past.

When I am home with my team, boyfriend, and coaches, it's much easier to be in the right place mentally to step in the cage. Here in the house I've had to learn how to truly embrace the challenges ahead, accept and analyze my fears, then find a way to be victorious.