After seven weeks of battles, the final elimination round matchup will take place on this week's episode of The Ultimate Fighter: A New World Champion, as No. 8 seed Emily Whitmire from Team Gaethje takes on No. 9 seed Christina Marks from Team Alvarez.

In the last episode, Rachael Ostovich-Berdon pulled off an upset as she knocked off Melinda Fabian in dominant fashion, and now it's up to Whitmire and Marks to close out this opening round before the quarterfinals begin next week.

Of course, Whitmire has already come under the spotlight for all the wrong reasons earlier this season when she suffered a rib injury during a grappling practice that threatened to knock her out of the competition. When the injury occurred, Whitmire could barely move and it hurt to breathe, which had her concerned that she may have broken a rib or possibly separated a muscle, which are both severely debilitating and would have likely ended her run in the tournament before it even started.

Thankfully, Whitmire got better news once she made it to the UFC Performance Institute that neither of those injuries had occurred, but she still did some damage to her ribs, which would require therapy and recovery time. As it turns out, Whitmire was able to rest and rehabilitate because she was the final fight of the opening round and that certainly helped, but rib injuries don't just go away in a matter of days, so she's still dealing with the pain as she prepares to face off with Marks this week.

To make matters worse for Whitmire is that while she's a well-rounded fighter, her best attribute is her ground game, and that could be severely affected if that rib injury flares up during her bout with Marks. Whitmire has an arsenal of submissions at her disposal, but any kind of harsh movement could make the injury even worse, so it's definitely something to watch as the episode unfolds this week ahead of the fight with Marks.

As for Marks, she's one of the more experienced fighters on the show as she joins the roster with an 8-8 record, although she's undefeated as a flyweight. For a big part of her career, Marks competed as a bantamweight, where she faced off with several notable names including former UFC women's title challenger Sara McMann. She's currently riding a three-fight win streak since moving to 125 pounds, but Marks has to know that she's facing a difficult style matchup with her fight this week.

As previously mentioned, Whitmire is a ground specialist and Marks has struggled with submissions throughout her career. In fact, six of her eight career losses have come by submission, so Marks has to know that toying with Whitmire on the ground will probably not end well for her. On the flipside, however, Marks is a very capable standup fighter and undoubtedly one of the best strikers on the show. Marks would be wise to practice her takedown defense and then target the body as she looks to expose Whitmire's injury in this fight.

Body shots are painful enough, but a punch or kick to already injured ribs can be devastating, and Marks has to know that going into the fight.

Elsewhere this week, the tension between coach Eddie Alvarez and strawweight contender Lauren Murphy will continue to unfold as the two keep butting heads.

Earlier in the season, Murphy suffered an upset loss in her opening round matchup against Nicco Montano, and the defeat was particularly staggering for the UFC veteran. Considering Murphy put her life on hold to join the show while being ranked as the No. 3 overall seed, it's safe to assume she had lofty expectations to not only make it deep into the competition but contend for the title when it was all over. Unfortunately, Murphy was knocked out of the tournament in her first fight and that was an especially tough pill to swallow. 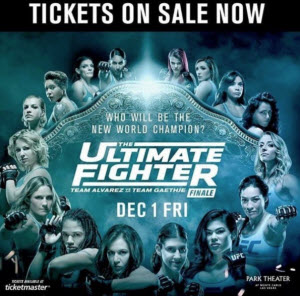 So the day after her fight ended, Murphy decided to skip the early morning practice with her teammates in favor of regrouping back at the house before returning for the evening session with her training partners. Unfortunately, Alvarez was disappointed that she didn't show up for the morning session, believing that she was sulking rather than getting better in the gym, and even commented that if she couldn't handle a tough loss than perhaps she's not built for this sport.

Well that only served to further enrage Murphy, who was none too happy with Alvarez's comments, and it's safe to say she's going to hash out some issues with her coach this week. With Team Alvarez down one fight in the overall competition, the former lightweight champion could certainly use all the support this week as he tries to get Marks ready for battle, but there will definitely be a division amongst the fighters as Murphy continues to clash with her coach.

Another highlight in the upcoming episode will be the return of the coaches’ challenge.

UFC President Dana White has stated numerous times that the coaches’ challenge is his favorite part of the season and he's certainly seen his fair share of showdowns between fighters over the years. While some competitions have turned nasty, including Ronda Rousey's infamous wall climb against Miesha Tate or the dunking contest between Joanna Jedrzejczyk and Claudia Gadelha, this coaching matchup probably won't turn volatile.

Then again, with $10,000 on the line as well as $1,500 going to each fighter on the winning team, Alvarez and Gaethje might just amp things up this week.

Between the coaches’ challenge, the drama unfolding on Team Alvarez and the final elimination round matchup between Whitmire and Marks, there's plenty to see on this week's episode of The Ultimate Fighter and it all goes down tonight at 10pm ET on FS1.