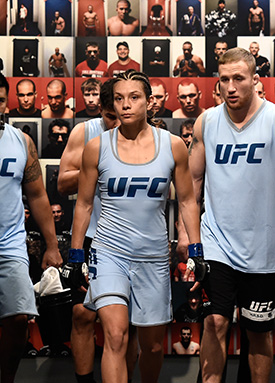 It was only a matter of time before someone managed to pull off an upset and that's exactly what unfolded on the latest episode of The Ultimate Fighter: A New World Champion in the matchup between No. 14 seed Nicco Montano and No. 3 seed Lauren Murphy.

While the favorites in the tournament had been rolling to this point in the show, Montano was a dark horse selection who even UFC President Dana White said could be a threat to anyone in the house. Still, it was a shocking result, considering Murphy's veteran pedigree and UFC experience as she entered the tournament looking to take home the women's flyweight title after being a former Invicta FC bantamweight champion.

Ahead of the fight this week, Murphy took center stage for much of the episode as she spoke frankly about her upbringing, her struggles with drugs and alcohol and how she eventually found mixed martial arts as a new passion in her life after getting married. 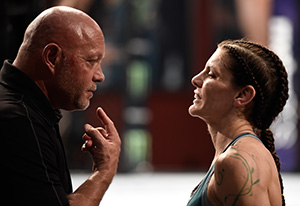 As Murphy explained this week, she grew up idolizing her father, who was not only her parent, but her best friend and the person she most admired in the world. Sadly, Murphy's father was taken from her when she was just 11 years old after he died in a tragic plane crash. Unfortunately, the loss of her father sent Murphy into a downward spiral that started when she was just 14 and ended with her addicted to drugs and alcohol. The destructive cycle eventually led to Murphy overdosing, but even that wasn't enough to scare her straight as she continued to relapse into the same bad habits. Murphy's addictions even got her kicked out of nursing school when she was attempting to get her life on track.

Eventually, meeting her future husband Joe got her life straightened out and it wasn't long before she found the same passion for fighting. Murphy transitioned into professional mixed martial arts, where she put together an undefeated record before eventually finding her way into the UFC women's bantamweight division.

Murphy's experience outside of The Ultimate Fighter also made her a great selection for coach Eddie Alvarez, who was well aware of her credentials when he was picking teams this season. Working with a veteran like Murphy was a perfect situation for Alvarez, who only had so much time to spend with the fighters and mostly wanted to work on game plan and strategy to help each of his athletes move on to the next round.

As for Montano, she joined the show with a 3-2 record while training out of Albuquerque, New Mexico. Montano didn't have the same level of experience as Murphy, but coach Justin Gaethje was confident she had the skills to pull off the upset in this matchup. Gaethje noted that Montano was a very strong, gritty fighter who could really push the pace on Murphy and make this an uncomfortable bout for the UFC veteran.

Gaethje specifically noted Montano's ability to land strikes with power, which he believed would be a huge asset for her in the fight. He also noted that Montano has a gas tank for days and that conditioning could help her really push the pace on Murphy for two rounds or even three rounds if they needed sudden victory to determine a winner.

As it turns out, Montano only needed two rounds to get the job done in a very impressive outing for the underdog No. 14 seed. 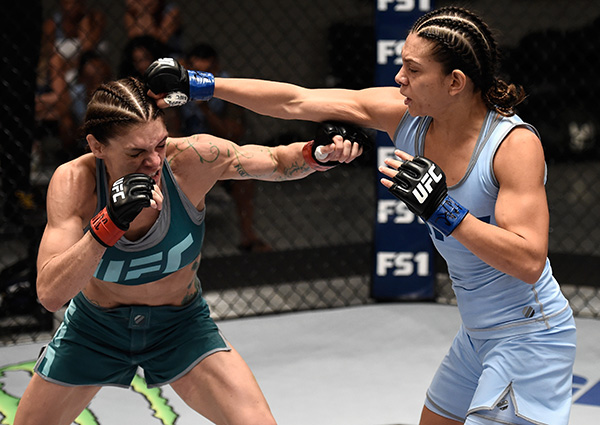 ROUND 1
Montano shows no fear striking on the feet, landing several hard kicks in the first few exchanges. Montano continues to target the legs and the body until Murphy finally connects with a solid punch that ends with the fighters locked in the clinch. Murphy eventually breaks free but it's Montano who connects with another hard kick to the body after the fighters reset in the center of the Octagon. Montano lands another nasty inside leg kick followed by a spinning back fist that is defended well but still gets Murphy's attention. Murphy presses forward looking for the takedown but Montano defends well while tagging her with punches and knees to the body. Off the break, Montano connects with another stinging body kick before the round comes to an end. 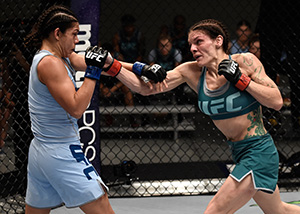 Murphy comes out more aggressive to start the second round, putting the pressure on Montano with her punches and kicks until shooting in for a takedown against the cage wall. Montano does a good job defending after Murphy gets her to the mat for just a brief second as the fighters work back to the feet. Murphy grabs on to a body lock and again starts to work for a takedown with Montano defending. Murphy drops down, grabbing on to a leg, but still can't secure the takedown. Montano counters with a knee to the face as Murphy continues to press forward in her attempt to drag the fight to the ground. The fighters keep jockeying for position in the clinch, with Murphy and Montano both trying to gain the upper hand. They eventually separate, with Montano connecting with a hard body kick and a stiff right hand that rattles Murphy's jaw before the fight comes to an end.

Montano celebrated the upset victory as she became the first lower seed to move on to the next round in the tournament while Murphy was clearly devastated after a loss in the opening round of the show.

"I thought maybe dropping [to 125 pounds] was going to be the answer to all of my problems and clearly it's not," Murphy said.

Murphy really had nothing to be ashamed about because Montano put on an outstanding performance and she may end up as the real surprise in this tournament depending on how things play out the rest of this season. 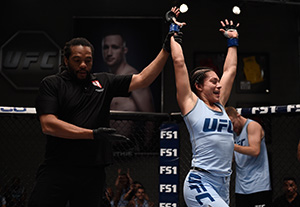 Montano's win also put Team Gaethje up 3-1 in the season thus far, with the lightweight contender also picking the next fight. Gaethje opted to pick No. 5 seed Maia Stevenson to go up against No. 12 seed Sijara Eubanks from Team Alvarez.

Will Stevenson get Team Gaethje another win or will Eubanks be able to pull off the second straight upset in the tournament? Tune in to the next episode of The Ultimate Fighter: A New World Champion next Wednesday night at 10 pm ET on FS1 to find out.