In a pair of battles that featured teammate versus teammate, the first two semifinalists were determined during the latest episode of The Ultimate Fighter.

First up was No. 1 seed Roxanne Modafferi, as she faced off with No. 8 seed Emily Whitmire. Coach Justin Gaethje opted to bow out of training either of the fighters so he could maintain no bias while watching two of his athletes do battle with only one of them moving on to the next round in the tournament.

This experience has been a huge opportunity for Modafferi, as she was not only looking for the chance to become the first ever UFC women's flyweight champion, but she wanted to make a better showing for herself after falling short on The Ultimate Fighter 18. Thus far, Modafferi has looked outstanding as she finished Shana Dobson in the opening round with a TKO, but now the competition will get stiffer, starting with Whitmire this week.

"I feel like this is my redemption season," Modafferi said. "I lost on the last season I was on, TUF 18. Now I've got great coaches, I'm on a winning streak. This is it"

As for Whitmire, she moved everything she owned into storage after moving out of her apartment just for the chance to compete on the show. Of course, Whitmire knows that she's an underdog going up against a veteran like Modafferi, but that wasn't going to deter her from trying to pull off the upset and punch her ticket into the semifinals. 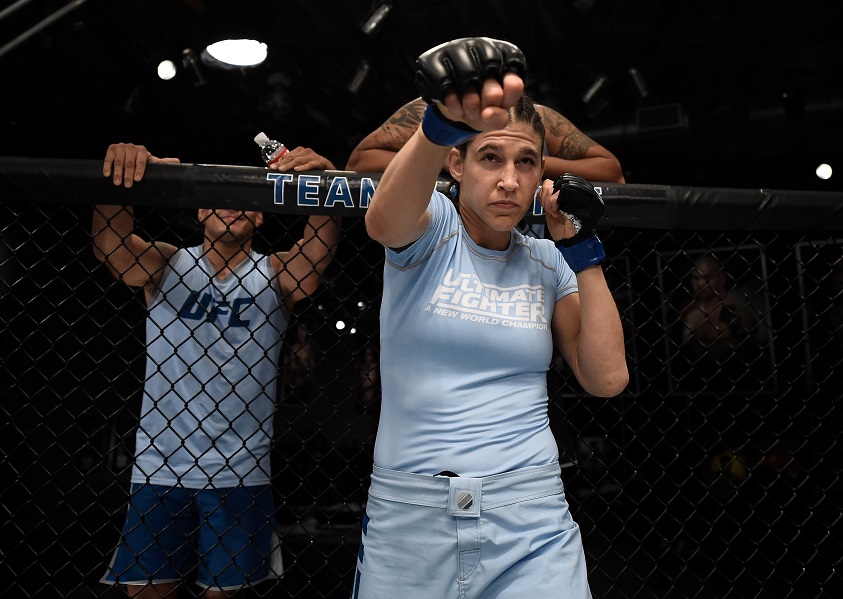 ROUND 1
Both fighters were throwing some heavy leather early, Whitmire connecting with a little more consistency. Modafferi remains the aggressor but she's eating a lot of counter shots as she moves forward. Modafferi uncorks a spinning backfist but doesn't land it and Whitmire uses the opening to grab a body lock while trying to get the takedown. Whitmire and Modafferi jockey for position against the fence with each fighter taking control for a moment or two before reversing. Modafferi eventually works her way into a takedown as she brings Whitmire to the ground and begins to advance her position. Modafferi continues to work until she moves into the mount and then transitions until she takes Whitmire's back. Whitmire is able to push off the cage and get loose for a moment, but Modafferi moves with her and she takes the back again. Whitmire keeps moving, which then allows Modafferi to move into mount yet again as she starts raining down punches and hammer fists. Whitmire tries to roll but Modafferi keeps the pressure on, throwing a barrage of elbows from the top. Modafferi is relentless with her attack, bludgeoning Whitmire with elbows as the 10-second clapper is heard. That only makes Modafferi go for the finish that much harder and Whitmire is just defending without trying to escape, which forces the referee to stop the fight with just one second remaining in the round. 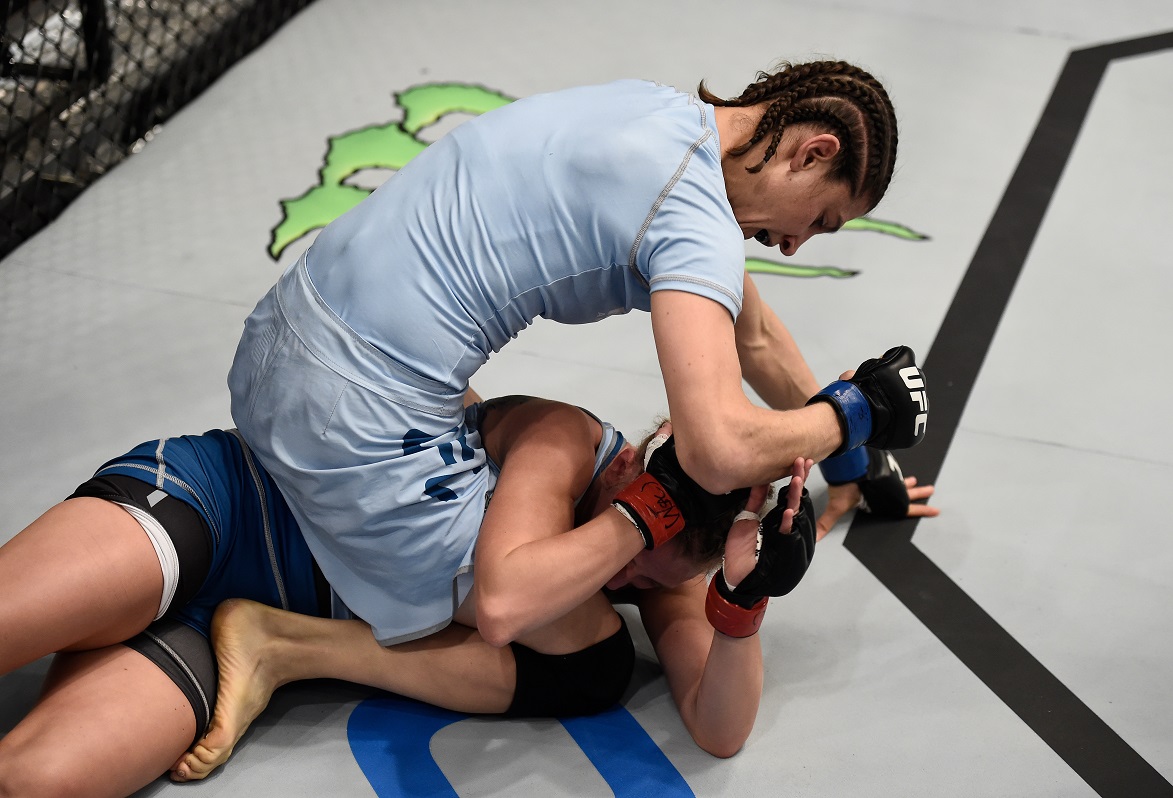 With Modafferi now in the semifinals, it's down to DeAnna Bennett and Sijara Eubanks to decide who she will face in the next round.

Bennett and Eubanks both had equally dominant performances in the opening round, and as proud as coach Eddie Alvarez has been of his fighters, he opts to bow out of the training sessions this time around so he won't show favor to anybody.

While the hard work in the gym is nearly done, Eubanks still has another fight on her hands as she once again has to face the scale to make weight. As one of the biggest fighters on the show this season, Eubanks has already struggled to make the flyweight limit. The last time around, she was forced to cut off her hair to make weight, and getting down to 126 pounds for a second time in just a few weeks might be even tougher.

It seemed during the early going that Eubanks was going to have an easier weight cut, but with time ticking away until stepping on to the scale, she just couldn’t shed the last pound necessary. When she weighed in, Eubanks was at 126.75 pounds, which means she had an hour to cut the additional three-quarters of a pound.

At first, Eubanks could barely move off the couch in her team's room and with the possibility that she might not make weight, Lauren Murphy and a couple of the other fighters who had been

eliminated immediately jumped in the sauna to shed some pounds in case they got the call to take the fight. That naturally rubbed Alvarez the wrong way, especially considering his volatile relationship with Murphy this season.

Eventually, Eubanks made her way back to the sauna before getting on to the scale, where she was right on the dot at 126 pounds, meaning she would face Bennett the next day. After the weigh-ins, Murphy apologized to Eubanks for trying to jump on her misfortune but every fighter in the house who has been eliminated would love to get a second chance. Even Eubanks understood where Murphy was coming from, but there was no way she was going to give up this opportunity to keep her fight for the inaugural women's flyweight title alive.

ROUND 1
The fighters are content to exchange strikes as the first round opens, and it's not long before Bennett starts to land more consistently, but Eubanks is still firing back. Bennett presses forward and grabs the clinch against the fence as she begins looking for her first takedown of the fight. It's Bennett who breaks the clinch and backs out to reset in the center, where they begin exchanging strikes again. While Bennett was landing with more volume, it's clear that Eubanks has the power advantage, as each of her punches land with a dramatic thud. Bennett continues to throw punches, but Eubanks begins to march forward with her power shots until she unleashes a nasty head kick that lands flush. Bennett eats the shot and just crumbles to the mat as the referee rushes in to stop the fight as Eubanks begins her celebration. 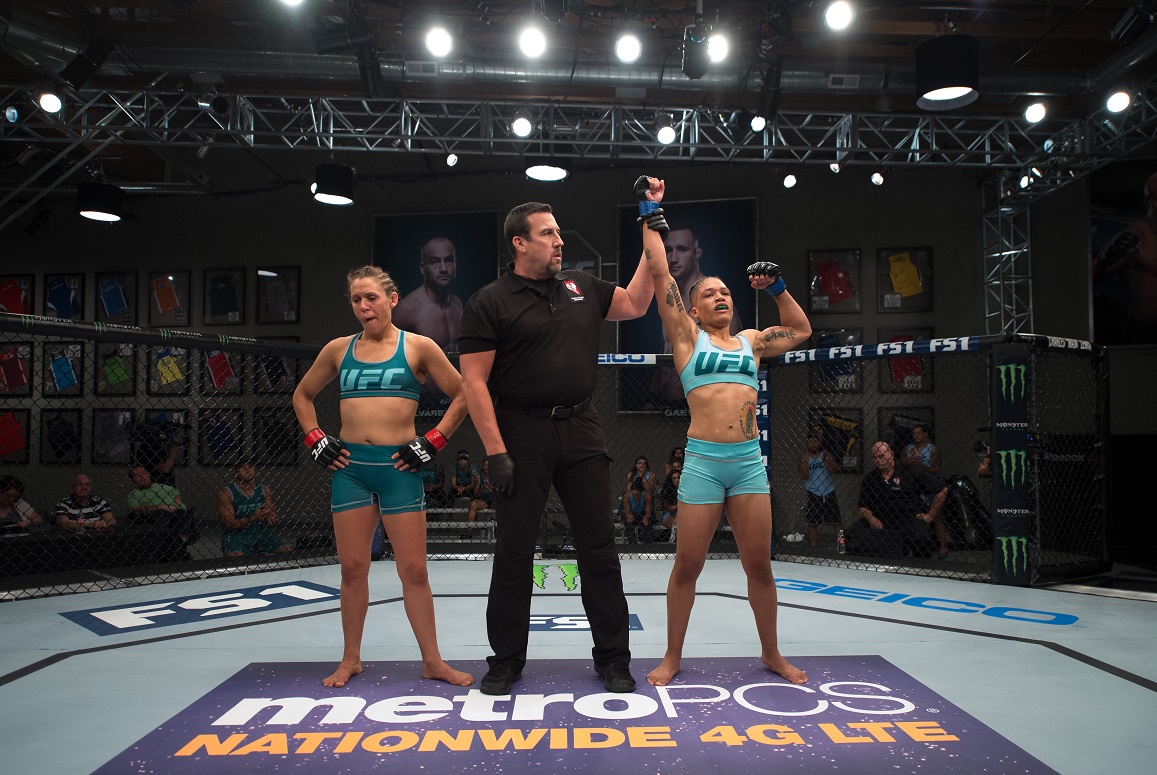 "One of the best knockouts you will see on The Ultimate Fighter," White said about Eubanks' dramatic head kick finish to put Bennett away in the opening round.

With Eubanks now moving onto the semifinals, the next episode of The Ultimate Fighter will determine the next two participants with a pair of fights taking place one week from today. No. 2 seed and former Invicta champion Barb Honchak will take on Rachael Ostovich-Berdon while Montana Stewart faces off with upset specialist Nicco Montano.

Two more semifinalists will be crowned as The Ultimate Fighter: A New World Champion gets that much closer to the end of the tournament. It all goes down next Wednesday night at 10 pm ET on FS1.