As The Ultimate Fighter: A New World Champion continued this week, another potential upset was brewing as No. 12 seed Sijara Eubanks took on No. 5 seed Maia Stevenson in a classic battle between grappler and striker.

Eubanks entered the tournament as a heavy underdog with just a 2-2 record in her professional career, but the veteran Brazilian jiu-jitsu specialist felt like the UFC matchmakers got the seeds wrong because deep down she believed she belonged somewhere in the top five in the rankings. Meanwhile, Stevenson was placed among the favorites to win the entire tournament, but she still had something to prove while looking to get out from the shadow of her famous husband - former Ultimate Fighter winner Joe "Daddy" Stevenson.

Ahead of the fight this week, Team Alvarez fighter Lauren Murphy was still dealing with the aftermath of her loss to Nicco Montano. Murphy entered the tournament as the No. 3 seed and was undoubtedly one of the favorites to make it deep into the competition and possibly challenge for the title when it was all said and done. Unfortunately, Murphy came up short in her opening round matchup and she was emotionally devastated after the set back.

Once she returned to the house, Murphy was visibly shaken from the loss while also hurting from missing her husband and son at home. As if the loss wasn't bad enough, Murphy had to fall in the opening round of the tournament, which means she's got several weeks ahead of her while watching the rest of the competitors move forward in their attempt to try and capture the inaugural UFC women's flyweight title.

The morning after her fight had ended, Murphy opted to skip the early practice with her teammates as she attempted to move past the defeat. That didn't sit too well with coach Eddie Alvarez, who believed that Murphy should have been there to help the rest of her teammates even if she was mired in a funk after the defeat.

"She lost and you're not here, you're probably not built for this," Alvarez said about Murphy.

When Murphy arrived to the second practice later in the day, she was still struggling with the loss but she wanted to return to training with her teammates. It was an uneasy setting between Murphy and Alvarez as the coach and fighter were clearly at odds about her absence during the earlier training session.

Murphy ultimately erupted at the notion that she didn't deserve one morning to lament over a devastating loss like the one she suffered to Montano and she lashed out at Alvarez for presuming to know much about her after only spending a couple of weeks as her coach. Murphy was definitely upset by the way things played out, especially considering her veteran experience when compared to everyone else on the show. Murphy knew how to get past her loss but it was just going to take some time and that didn't appear to be what Alvarez wanted to afford her.

Regardless, Alvarez had other business to tend to this week as he started to prepare Eubanks for her showdown with Stevenson. 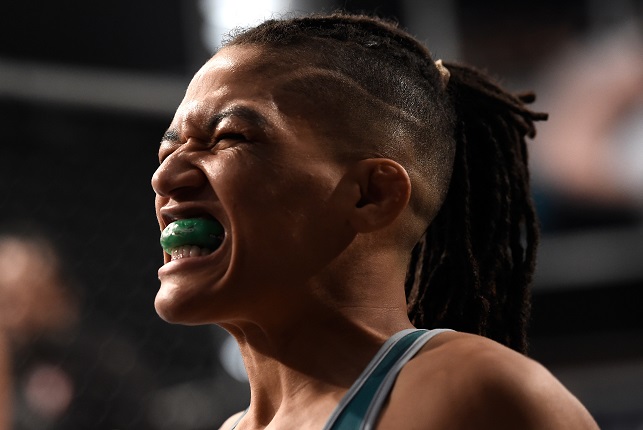 Eubanks is top-level grappler with a black belt in Brazilian jiu-jitsu, so she has plenty of skills on the ground, but she also wasn't afraid to throw hands with Stevenson. Still, Alvarez knew that Eubanks’ best path towards victory was taking this fight to the ground, where she would have the biggest advantage. Meanwhile, Justin Gaethje was helping Stevenson get ready by preparing her for a dogfight over 10 - or potentially 15 - minutes in the Octagon with Eubanks. Gaethje wanted Stevenson to turn the fight into a brawl where she would have the best chance to catch Eubanks with one of her best strikes.

Before the fighters ever got to step into the Octagon this week, Eubanks first had to deal with making weight as one of the bigger competitors on the show. Weight cutting is always tough on The Ultimate Fighter, as athletes will often have to get down several times over the course of a season. Eubanks entered the house at nearly 150 pounds, which meant she would have to cut somewhere around 25 pounds before facing off with Stevenson.

While it was a lot of weight at first, Eubanks got down below 130 pounds with little struggle. But with only a half-pound to go, her body stopped sweating and it became nearly impossible to make the flyweight limit. That's when Eubanks decided to pull out all the stops by cutting her hair to ensure that she would make 126 pounds for the fight. When she stepped on the scale, Eubanks was very happy to hear that she made it and the fight with Stevenson was on for the next day.

ROUND 1
The fighters exchange a few punches early, with Stevenson tagging Eubanks with a stiff shot as she ducks down for the first time looking for the takedown. Stevenson lands with her punches with a little more speed and accuracy while Eubanks swings with power in every shot. Eubanks finally swoops inside and she secures her first takedown as she gets Stevenson down to the mat. Stevenson defends well, with Eubanks jumping to take her back while trying to maintain control. Stevenson works her way back up to the feet, but she can't break away from the clinch as Eubanks cracks her with some hard punches from the inside. Eubanks continues to 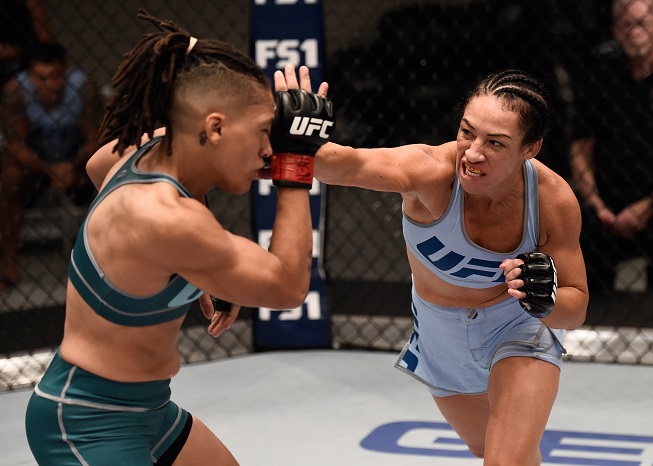 punish the body with punches while also adding in some knees as Stevenson tries to break free of her grasp. Coach Alvarez asks for a single leg takedown and on command Eubanks grabs on to Stevenson and brings her back to the ground. Eubanks begins unleashing a hard ground-and-pound attack with a nasty series of punches, battering Stevenson, who can only play defense. Just before the end of the round, Eubanks nearly takes the back again but Stevenson survives until the final horn sounds.

ROUND 2
Stevenson is on point with her straight punches again but it doesn't take Eubanks very long to swoop inside to grab on to another takedown. Eubanks stays on top, working for strikes, before moving into side control, where she begins looking for the kimura before Stevenson wiggles free from the submission. Unfortunately for Maia, her defense was only temporary as Eubanks continues to work for the kimura until she yanks the arm out and twists it behind her opponent's back. As the submission tightens up, Maia has no choice but to tap out from the kimura as Eubanks pulls off the upset win. 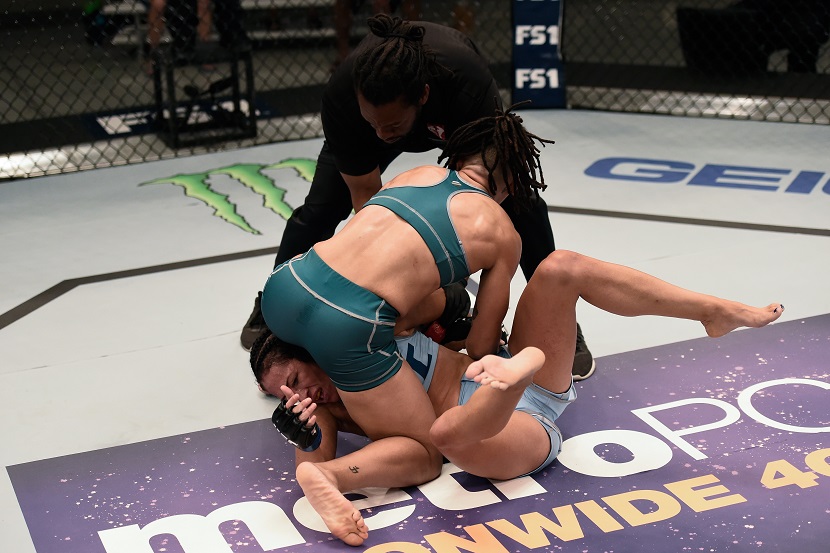 Following the end of the fight, Eubanks went to the corner where UFC President Dana White was sitting and she began shouting “Twelve” over and over again after she was ranked so low going into the tournament. Given her performance this week, it's doubtful anybody will be sleeping on Eubanks going forward.

With Eubanks moving forward, the next fight in the tournament was announced as No. 2 overall seed and former Invicta FC champion Barb Honchak was selected to take on No. 15 seed Gillian Robertson.

Honchak was one of the favorites to make it all the way to the title this season, but after a two-year layoff, is she ready to return to top form? Can Robertson keep the string of upsets going by knocking off the No. 2 overall seed? Find out next week when The Ultimate Fighter returns on Wednesday night at 10pm ET on FS1.