The first upset of season took place on last week's episode of The Ultimate Fighter, as upstart contender Nicco Montano defeated veteran UFC fighter Lauren Murphy by unanimous decision to move into the second round of the championship tournament.

Tonight’s episode will showcase the aftermath of that event as well as get fans geared up for another fight in the opening round as No. 5 seed Maia Stevenson from Team Gaethje takes on No. 12 seed Sijara Eubanks from Team Alvarez.

Last week's defeat was a particularly tough pill for Murphy to swallow, considering the accolades she had walking into The Ultimate Fighter this season. When casting for the show began, the UFC allowed all competitors interested in taking a shot at the inaugural flyweight title to try out for the series. As it turns out, Murphy, who spent the majority of her career including four fights in the UFC competing as a bantamweight, would drop down to 125 pounds for her chance to become a champion.

Murphy was also the only incumbent UFC fighter to make it on to the show so she definitely had a target on her back on the first day she arrived, and being the No. 3 seed overall put her as one of the favorites to make it all the way to the finals. Unfortunately, Murphy fell short in her fight against Montano and she lamented the way things played out even moments after the loss.
RELATED CONTENT: Get to know TUF cast - Sijara Eubanks | Recap Episode 4 of The Ultimate Fighter

Murphy believed that moving down to the flyweight division would solve many of the problems she suffered as a bantamweight when she was outsized and outmuscled by many of the top competitors in the UFC. The loss to Montano sent Murphy back to the drawing board looking for answers after a disappointing outing ended with a first-round loss in the tournament.

As she picks up this week, Murphy is still tormented with what went wrong in the fight against Montano and how she left her husband and son for more than six weeks to pursue this dream to become UFC champion, only to have it already over. Murphy was in a very unique situation on the show as a UFC veteran who wanted to make her mark in a new division. Instead, Murphy didn't make it out of the opening round and now she has to ponder that defeat for the next few weeks until the show wraps up filming.

It's safe to say that Murphy is haunted by the loss and that will, in turn, affect her ability to focus on the rest of the competition as she's already been knocked out of the tournament.

That will also leave coach Eddie Alvarez in a tough situation because he's still got seven other fighters who are all still training every day, regardless of whether or not they are in the tournament. Alvarez has obviously tasted some tough defeats in his day, so he knows how much a loss can stick with a fighter, but it will be interesting to see how he reacts to Murphy's mental state a day after her fight with Montano.

When it comes to the fight this week, both Maia Stevenson and Sijara Eubanks will have something to prove when they step into the Octagon.

Stevenson is a veteran with 10 professional bouts on her resume who is currently riding a five-fight win streak. Stevenson finished all five of those opponents by either knockout or TKO, with only one fight making it out of the first round. Stevenson definitely has the veteran experience to make waves on the show this season but, more than anything, she's fighting for respect thanks to having a very famous last name.

Maia Stevenson is married to former Ultimate Fighter season 2 winner and UFC title challenger Joe Stevenson. Of course, she's made her own way in the sport, but sometimes it's tough to escape that last name, especially considering the laundry list of accolades that her husband has racked up in his career both in the UFC and during two different stints on the reality show. Stevenson is very proud of everything her husband has accomplished, but she wants to earn her own way now and becoming the first ever women's flyweight champion would be a tremendous start to creating a legacy in the sport.

As for Sijara Eubanks, she enters the competition with a 2-2 record, but her background in martial arts goes much deeper than four professional fights. Eubanks is best known as a grappler, where she's traveled to numerous Brazilian jiu-jitsu competitions to become champion several times over. Eubanks' grappling accomplishments eventually even earned her a black belt in Brazilian jiu-jitsu, so there's little doubt that she's got the ground skills to give anybody in this competition some serious trouble if the fight goes to the mat. 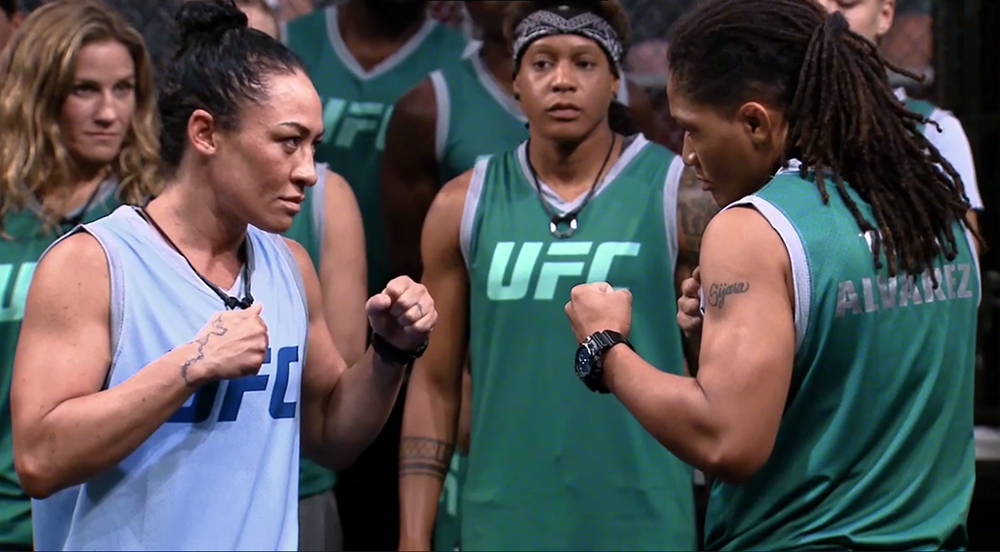 Eubanks believes with her pedigree and talent that she should have entered the competition much higher than the No. 12 overall seed in the tournament. While some fighters might see that as a slight and allow it to work against them, Eubanks has taken that number and used it as fuel to get ready for her upcoming fight against Stevenson, as well as what she hopes will be a long run in the flyweight championship tournament.

Last week's fight showcased how an underrated fighter can surprise even a crafty veteran and this matchup is no different. Eubanks has incredible ground skills and while Stevenson is no slouch on the mat, she'd be wise to avoid too many grappling exchanges with a big, powerful opponent like the one she's about to face from Team Alvarez. Eubanks has power in her hands as well, but she has to know her best path to victory will be taking this fight to the ground, where she knows she has an advantage.

Can Eubanks pull off the second upset of the tournament or will Stevenson's veteran pedigree carry her into the second round? Tune in to the next episode of The Ultimate Fighter: A New World Champion tonight at 10 pm ET on FS1 to find out.

Fight Motion for UFC 267: Blachowicz vs Teixeira, Live From The Etihad Arena in Abu Dhabi On October 30, 2021.