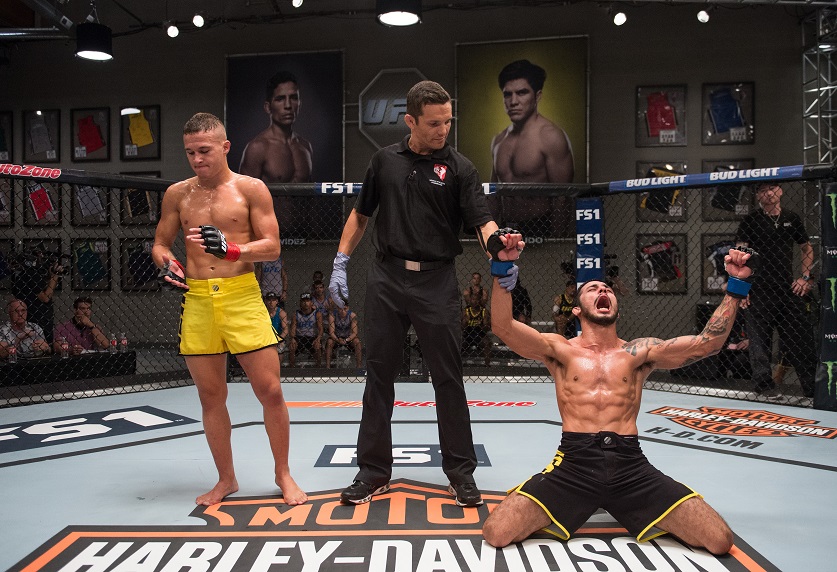 The quarterfinals on The Ultimate Fighter are officially underway while Joseph Benavidez and Henry Cejudo take their rivalry to a whole new level this week after a guest coach arrives in town to help out the competitors.

Following a hard fought opening round, the competitors were treated to a barbecue and a pool party at the house where everyone got the chance to unwind. It was a celebration of sorts after the first eight fights all ended with finishes and the tournament definitely impressed UFC President Dana White.

Of course, Benavidez couldn't waste an opportunity to take a shot at Cejudo after watching him roll around on the ground and act a little crazy at the pool party. Benavidez once again gave Cejudo a hard time about his desire to be a role model to the next generation of fighters and he was unrelenting with his jabs directed at the Olympic gold medalist.

"No one wants to be like you, Henry, so how are you a role model?" Benavidez said.

If that comment wasn't bad enough, Benavidez raised the stakes once again when his head coach Duane "Bang" Ludwig arrived in Las Vegas to help out for a few days. Ludwig is one of the people responsible for getting Benavidez ready before all of his fights so it only made sense that he would show up to offer assistance to his team as well.

Ludwig is not only a multi-time veteran of the UFC, but he's turned into one of the most sought after coaches in the industry while working with fighters like Benavidez and former bantamweight champion TJ Dillashaw. Thanks to Ludwig's vast knowledge, Benavidez decided that it was only fair to offer his help to the entire cast of the show this season rather than just giving lessons to his squad.

So during an open gym day on Sunday, Benavidez invited all of the fighters from Team Cejudo to come learn under Ludwig but there was one very special condition - Henry Cejudo could not make an appearance during the session.

Benavidez justified the move by saying that he didn't want Cejudo to pick up on any of the techniques that Ludwig would be teaching that could also be used in their fight when they meet in December. Cejudo's assistant coaches fought against the idea because they took this as Benavidez making some kind of power play while also looking to turn fighters against their coach by going to train with the other team. Ultimately, Cejudo conceded to the request to stay out of the gym that day while allowing his fighters to go train under Ludwig.

Cejudo looked at the entire situation as Benavidez being rather childish while trying to exert his own agenda by using the rest of the fighters in the house to do it. Cejudo promised he'll have his revenge when they meet in the Octagon at The Ultimate Fighter Finale.

"He's a bully. You've got to humble a bully," Cejudo said of Benavidez.

Once Ludwig finished teaching class, everybody's attention turned to the fight this week between Pantoja and France, who were squaring off while also training under Cejudo this season. As the No. 1 seed in the tournament, Pantoja had a lot of expectations heaped on his shoulders as the season started, but the Brazilian was confident that he could live up to the hype. Meanwhile, France was a dark horse as a No. 9 seed but he made quite an impact with his first round drubbing of Terrence Mitchell.

Pantoja couldn't help but acknowledge the war he endured to get to the quarterfinals after facing off with a very tough and gritty Brandon Moreno in the opening round. Fighters all have to be concerned about health to make it all the way through this tournament, but Pantoja promised that he would sacrifice everything to make sure he got through France this week.

"If I have to go to war again and give my life again, that is what I'm going to do. That is why I'm here," Pantoja said.

As for France, he might be one of the most devastating strikers in the house, but he's also one of the most respectful competitors on the show. France had nothing personal with Pantoja and treated him like a teammate all season long, but this was about realizing his dream and nothing was going to stand in the way of that.

"It's just business. This is my goal and you're in my way," France said. 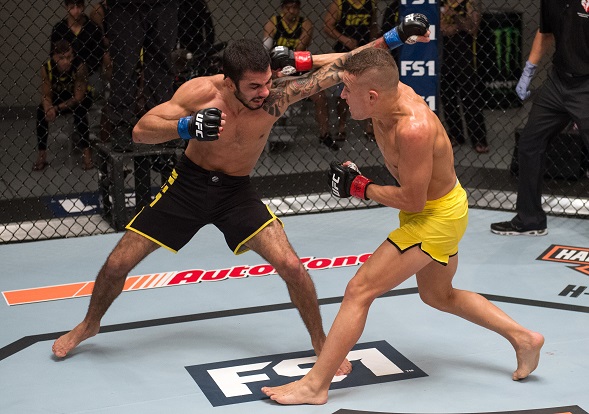 As the fight got underway, it was clear that Pantoja wasn't going to waste any time dragging France to the mat to avoid his lightning quick striking arsenal. Pantoja is a world-class grappler, so he had no problem getting France down early, but to his credit the New Zealand native did a great job working back to his feet several times. Unfortunately, France spent a majority of the round defending the takedowns and trying to stay off the ground, so he wasn't able to produce a lot of offense. It was also clear by the end of the round while the two fighters were standing that those early takedowns forced France to reassess his game plan, as he was very tentative to engage on the feet.

The second round saw France start to stop Pantoja's takedown attempts, but it still didn't open the floodgates for him to unleash any real damage on the feet. Instead, it was Pantoja who fired off a steady diet of leg kicks both to the inside and outside of the thigh that started to slow France down a bit. While the round was much slower in terms of overall action, Pantoja was definitely landing the better shots while France just couldn't pull the trigger to mount any kind of comeback.

When it was over, the judges all agreed that Pantoja had done more than enough to earn the victory in the first decision of the season.

With that fight finished, next week will see Team Benavidez fighter Hiromasa Ogikubo take on upstart Team Cejudo contender Adam Antolin in the next quartefinal matchup.

Don't miss a minute when The Ultimate Fighter returns on Wednesday night at 10pm ET on FS1.