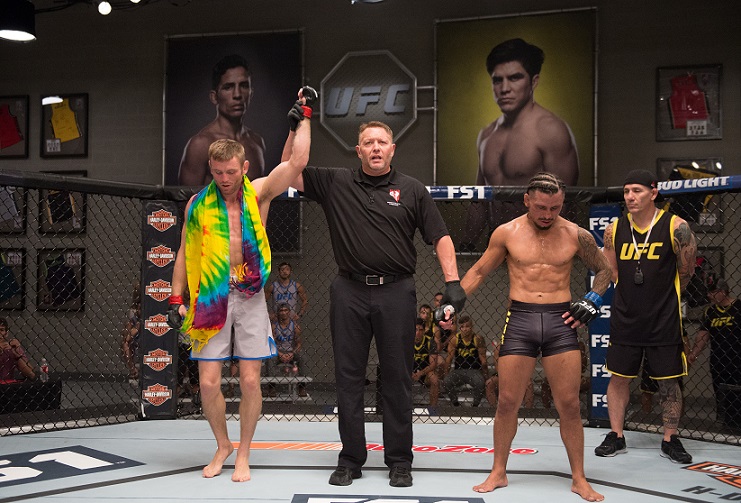 The opening round of the tournament of champions on The Ultimate Fighter is officially wrapped up after Tim Elliott faced off with Charlie Alaniz this week.

Before the fight got underway, a number of the competitors decided to blow off some steam by having a few (too many) drinks out by the hot tub following the latest bout between Matt Schnell and Matt Rizzo. While the fighters on this season of the show have been praised for their professional attitude while knowing exactly what is at stake, it's hard to deny that bad things might happen once people have been eliminated and there's nothing much to do but train and hope for a second shot in the tournament.

So this week saw Rizzo getting a little tipsy and then erupting about his fight with Schnell and how he believes he was the superior striker and grappler, but just got caught in a submission where he tapped out due to a triangle choke. Rizzo showing confidence in his skills isn't anything new, but he boasted about his superiority in front of Jaime Alvarez, who just happens to be teammates with Schnell at home in Florida, where they both train at American Top Team.
RELATED: Get to know tonight's fighters - Tim Elliot | Charlie Alaniz

Alvarez stood up for his teammate and fired back at Rizzo, but then felt obligated to tell Schnell what was being said about him while he was inside resting as the rest of the fighters were outside drinking. Schnell obviously didn't agree with the assessment of the fight but things boiled over after Rizzo discovered that Alvarez told him what was said.

Rizzo confronted Alvarez and called him a rat for telling Schnell what was said about him while the fighters were chatting by the hot tub. Alvarez countered by calling Rizzo a punk and saying that Schnell is his teammate and friend and he's never going to keep something like that from him. The situation eventually turned into a heated confrontation between Rizzo and Alvarez as the two fighters stood nose-to-nose in the center of the living room before some pushing and shoving occurred. The other fighters quickly separated them, but it's clear there's no love lost between Rizzo and Alvarez.

Maybe these two will settle the score at the finale in December?

The bad blood that spilled over between Rizzo and Alvarez wasn't the only drama this week because Charlie Alaniz, who was facing Tim Elliott from Team Benavidez, nearly got into an altercation with his own teammate Kai Kara France after an intense training session.

Alaniz is known for being a ferocious competitor inside and outside the Octagon, but things got a little too close for comfort after he was sparring with France ahead of his fight and told the New Zealand native that he would knock him out if they ever fought. France, of course, is best remembered for his blistering knockout over Terrence Mitchell in the second fight of the season and he's known for his fast hands and lightning quick striking skills. The comment didn't sit too well with France, who decided to bring it up when Cejudo closed out the training session with a team meeting.

"He's kind of crossing the line calling me out like that," France said.

When confronted with his words, Alaniz didn't back down from his statement and said very frankly that he's confident in his skills and believes that he can finish anybody in this competition - his teammates included. Alaniz's words didn't really seem to sit well with anybody on the show, but he wasn't backing down, especially with only a few days remaining until his first round fight with Elliott.

The coaches also got the chance to face off this week as Cejudo and Joseph Benavidez squared off in a game of Top Golf worth $10,000 in the annual coach's challenge. If there was one thing clear after this game was over, it was that Cejudo should probably stick to fighting and wrestling because golf is not his game. Benavidez defeated the former Olympic gold medalist in a rout to pocket the prize money as well as $1,500 each for all the fighters on his team.

Once the coach's challenge was wrapped up, it was finally time for Elliott and Alaniz to close out the opening round in the flyweight tournament of champions

Coach Henry Cejudo predicted that Alaniz could go out and finish Elliott within the first 30 seconds with the kind of blitzing offense he can unleash and the California native certainly tried his best to prove it. Alaniz came storming out of the gate with a wild array of striking techniques as he went after Elliott with guns blazing. To his credit, Elliott showed off his veteran experience to weather the early storm and apply a much more tactical and technical game plan.

After slipping in an early exchange and eating some punches on the ground, Elliott finally applied his wrestling advantage while looking for a takedown before putting Alaniz in a very bad position. Elliott had an opening to take the back after putting Alaniz on the ground, but instead of getting his legs locked and going for the choke, he instead saw an opening with 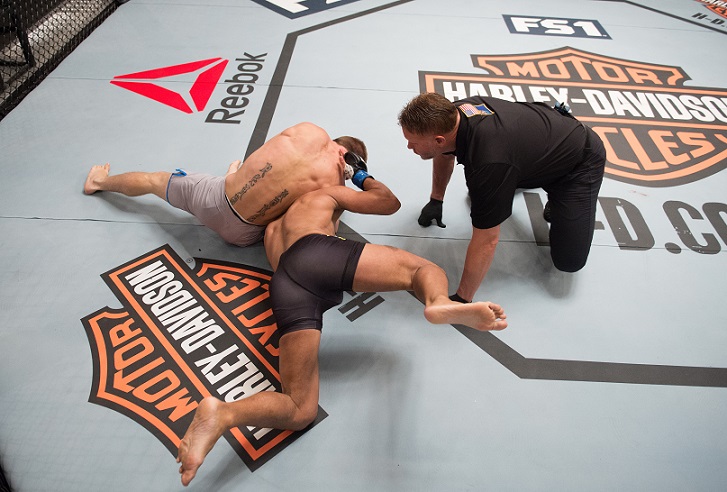 his opponent's head and neck wide open without any real defense being presented. Elliott took advantage and locked up a bulldog choke - a submission that's rarely been seen in the UFC outside of a couple of occasions - and Alaniz was immediately in trouble. A second later, with nowhere to go and the pressure mounting, Alaniz tapped out and gave Elliott the win.

With that, the first round of the tournament is wrapped up and now the quarterfinals will begin starting next week with two members of Team Cejudo set to square off as No. 1 overall seed Alexandre Pantoja takes on Kai Kara-France in a classic battle of grappler versus striker. Who will be the first fighter to move into the semifinals?

Tune in to the next episode of The Ultimate Fighter on Wednesday night at 10pm ET on FS1 to find out.