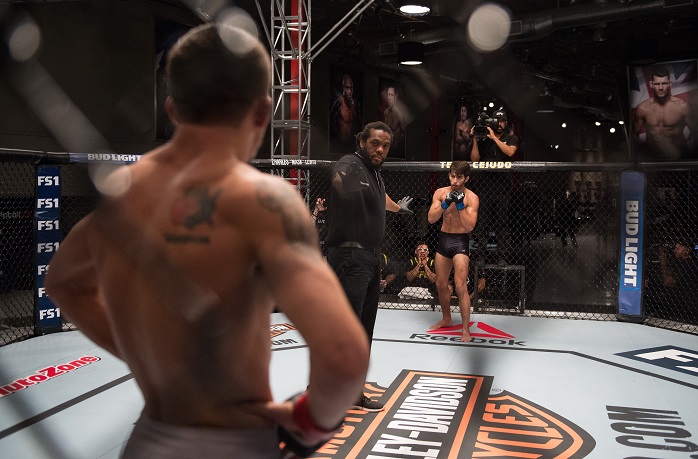 It's starting to become a theme on this season of The Ultimate Fighter, as the seventh opening round matchup ended in a finish, with Matt "Danger" Schnell sinking in a second round submission to finish Matt Rizzo. For those keeping count at home, that's seven fights and seven finishes thus far in the tournament of champions to determine who will face flyweight king Demetrious Johnson.

Schnell and Rizzo engaged in a back and forth war over two rounds in the best ground battle of the season, but before the two fighters locked horns in the Octagon, they both gave some background on how they got here.

For Matt Schnell, his journey to The Ultimate Fighter actually started when he was just a kid in Louisiana, where he emulated just about everything his older brother did while he was growing up. That meant Schnell was fighting and, according to him, it was happening almost every day for any number of reasons. If somebody looked at him sideways, Schnell would confront the person, and before long, it ended up with fists being thrown. He eventually channeled that aggression into mixed martial arts.

Four years ago, Schnell tasted his first bit of fame after he appeared on a MTV reality series called "Caged," which documented the lives of four up and coming MMA fighters as they made their way through the amateur circuit. Schnell was one of the most memorable cast members, and his star power earned him a lot of attention during the early part of his career. Of course that backfired on him after Schnell had somewhat unrealistic expectations about his course to get to the UFC, and after a 3-2 start to his career, he was forced to re-evaluate and make some adjustments.

Among the changes he made, Schnell ended up moving to Florida, where he began training full time with American Top Team - the camp responsible for welterweight champion Tyron Woodley, women's bantamweight champion Amanda Nunes and fellow Ultimate Fighter cast mate Jaime Alvarez. Schnell came to the Florida-based camp thanks to his friendship with UFC lightweight Dustin Poirier, who also grew up in Louisiana before relocating to American Top Team a few years back.

Since then, Schnell has put together an impressive winning streak while also becoming the interim flyweight champion for Legacy Fighting Championships out of Texas. When he's not fighting, Schnell is trying to find time to spend with his girlfriend Morgan, who he's been with for the past four years but it's all been at a distance. Schnell revealed that his girlfriend lives in St. Louis, so he's forced to be away from her most of the time except in those rare moments when he can fly in to town to spend time with her. His long-term goal is to win the show, win the UFC title and hopefully find a way that they can be together full-time.

As Schnell prepared for the fight this week, he used coach Henry Cejudo to great effect, considering his opponent Matt Rizzo comes from a wrestling background and would likely be looking for the takedown at some point in their fight. So Schnell worked with Cejudo and the rest of the coaches to get ready for that kind of wrestling attack so he could counter and look for the knockout on the feet.

As for Rizzo, the 30-year-old Pennsylvania native comes to the UFC as the Ring of Combat flyweight champion and the owner of a 9-2 record compiled while facing some tough east coast competition throughout his career. Rizzo lives at home with his parents along with his fiancée as he tries to make it as a professional fighter. Rizzo also holds a full-time job as a security system installer, and then as soon as he punches the clock, he's making a bee line to the gym, where he can continue to chase his dreams as a mixed martial artist

As noted by his opponent, Rizzo actually started wrestling when he was just four years old, so grappling is something that just runs through his veins. He also developed into a very slick Brazilian jiu-jitsu stylist after falling in love with mixed martial arts. Now Rizzo is trying to put it all together for a run in the UFC, and his golden opportunity came with The Ultimate Fighter this season.

Just like his coaches predicted, Matt Schnell didn't have to wait very long for Matt Rizzo to swoop in and start looking for the takedown. Rizzo kept up with relentless pressure as he pushed Schnell up against the cage, but he couldn't get the takedown until he nearly surrendered a guillotine choke as they fell to the mat. Schnell had his arms wrapped tight around Rizzo's neck, but to his credit, the Ring of Combat champion toughed his way through the submission and eventually popped his head out to escape. Rizzo continuously looked for the takedown throughout the opening round, but Schnell did a great job scrambling out of bad positions and never getting locked on the ground with the wrestler. Finally, after Rizzo did manage to plant his opponent on the mat with less than a minute to go, Schnell once again looked for an escape, but he used a triangle choke that nearly got locked up before the round came to an end.

The second round started out much like the first, with Rizzo shooting for a takedown, but he made a critical timing error and Schnell was able to sprawl out before landing on top when they hit the mat. Schnell didn't maintain the position for very long, however, as Rizzo quickly escaped and then managed to get both of his opponent's legs and landing yet another takedown. Rizzo was back on top but that maneuver ended up costing him dearly because Schnell once again saw the opening for the triangle choke. Except this time there was no bell to stop the submission from ending the fight. Schnell locked up the hold and Rizzo had no choice but to tap out.

Matt Schnell wins by second round submission via triangle choke and he's moving on to the next round. 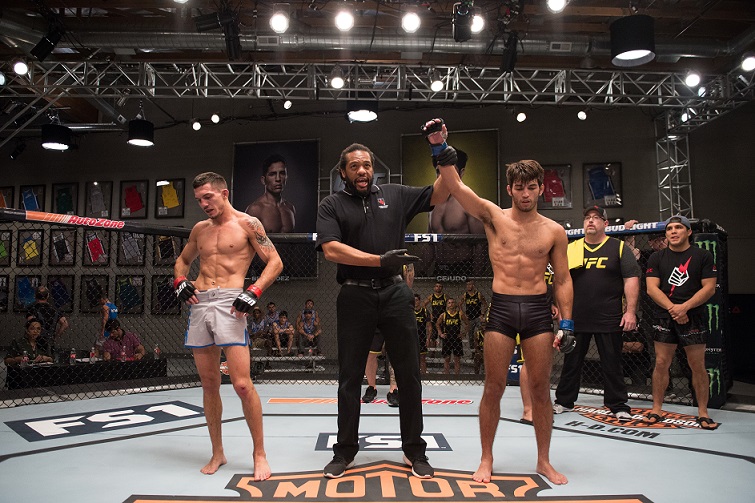 With Schnell's victory, Team Cejudo now sits at 4-3 in the competition, with the final opening round bout set for next week as UFC veteran and the No. 3 seed overall, Tim Elliott from Team Benavidez, takes on No. 14-ranked Charlie Alaniz from Team Cejudo. The tournament is only one week from the quarterfinals, but who will be the last fighter to make it?

Tune in to The Ultimate Fighter next Wednesday night at 10pm ET on FS1 to find out.